Global equity and commodity markets continue to sink on the Wuhan virus.  The U.K. prepares to officially leave the EU on Friday.  The Fed meets this week as it considers new tools.  Italian markets get some positive news.  Here is what we are watching this morning:

The Wuhan virus:  The virus infection rate is soaring.  The death toll is now above 80 and China is extending the New Year’s holiday to keep citizens in place.  The U.S. has confirmed five cases of the disease. The State Department is organizing flights to pull U.S. diplomats and some private citizens from Wuhan.  Hong Kong is preventing anyone from the Hubei province from entering the territory.  Fifteen nations, or territories have now confirmed cases, although the vast majority are in China.  Current estimates suggest that China’s GDP will likely decline from 0.5% to as much as 1.2%.  Wuhan is a major industrial hub for China and thus the outbreak is having a significant economic impact.  Of course, fear is dampening consumption activity in what is a major shopping season for China.

The CPC leadership is scrambling to contain the spread of the virus.  Official warnings of an “accelerating” spread are uncharacteristically frank.  One of the problems with authoritarian regimes is that they claim full control, so events such as these undermine that image.  One of the characteristics of this virus is that it is contagious during an incubation period that can last up to two weeks.  Simply put, a person can carry the disease and be completely asymptomatic for a rather longer period.  Thus, containing the spread will be tricky.

So, what is to be done…at least for investors?  First, these sorts of events usually have a three to five month period where they have a significant impact on financial markets.  There is always a fear that this one will be different, and it is possible that it will be.  However, more than likely, the Wuhan virus will peak in the next six weeks and then the recovery will start.  Second, it’s important to note that the operative factor affecting financial markets from this virus is fear.  The CDC estimates that between 291k to 646k die each year from influenza.  It is highly unlikely the Wuhan virus will be as lethal.  Still, there is a level of familiarity from the flu[1] that reduces the uncertainty surrounding it, so the market effects are usually muted.  Overall, the Wuhan virus is a big deal but investors should not overreact.

Italy:   On Sunday, local elections were held in the region of Emilia-Romagna.  Such elections would not usually be a matter of concern outside of Italy, but Matteo Salvini of the League entered the race to restart his plans to capture the government.  Interestingly enough, he was defeated by the center-left incumbent governor Stefano Bonaccini.   With the national government consisting of the Democrats, and the left-wing Five Star Movement now looking more secure in the short term, investors are aggressively bidding up Italian bonds.  So far today, the yield on the benchmark 10-year note is down 16 basis points to just 1.07%.  Across the West we are seeing political alignments in flux; in Europe, conservatives are joining up with environmental parties, and center-left parties are flirting with communists.  It is unlikely that any of these “odd couple” arrangements will hold, but the fact they are occurring at all shows the degree of political stress that is affecting Western democracies.

Brexit:  The official break occurs on Friday, although most of the rules will remain in place as the two sides negotiate the trade relationship.  By year’s end, freedom of movement between the U.K. and the EU will end; it is possible that visas will be required.  Brexit may have already cost the U.K. its preeminence in finance; London is no longer considered the world’s top financial hub.   Meanwhile, the Johnson government is risking the ire of the Trump administration over Huawei (002502, CNY, 2.99).  There is growing concern that a major casualty of Brexit could be the British auto industry.

A “new” Fed tool:  The FOMC meets this week; no change in anything is expected.  According to reports, the Fed is dusting off an old tool.  During WWII, the Treasury would inform the Fed of its borrowing needs and the rate it wanted to pay; the central bank would expand its balance sheet to accommodate the government’s borrowing.  This process continued in some forms until the Fed became independent in 1951.  Essentially, what the Fed is considering is fixing Treasury rates across the yield curve to ensure that rates will remain low.  This policy could become very important if fiscal funding followed an MMT structure; the worry about MMT is that the deficits could trigger a jump in bond yield brought on by “bond vigilantes.”  Under this policy, there would be no bond vigilantes.  Of course, other rates might rise; however, in this period, we note that corporate rates also tended to fall. 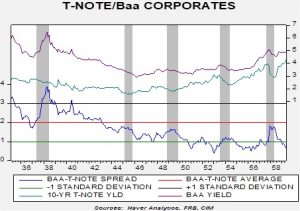 This chart shows the 10-year T-note and Baa corporate bond yields of similar duration from 1935 through 1958.  Note that the spread consistently declined then slowly rose as the Fed lifted interest rates to cool inflation.  The 1934-51 period is financial repression at its finest; what was missing in this earlier period is the current level of financial engineering.  The creation of various products to generate higher yield would be the real “bull market” if the Fed “goes back to the future.”

Global Housing Market:  On top of the risk that China’s coronavirus may spread abroad, data from the Dallas Federal Reserve shows global home prices in the third quarter of 2019 were up just 1.8% from one year earlier (net of inflation), compared with a recent peak of 4.3% in 2016.  The continued slowdown in housing reflects the world’s general economic slowdown in recent years, weaker cross-border demand in the midst of trade wars, and reduced affordability.

United States-European Union:  U.S. Commerce Secretary Ross warned that the Trump administration will retaliate if European Commission President von der Leyen’s proposed tax on carbon imports is protectionist.  The threat raises a new area of friction that could result in a worsening trade war with the U.S.

Germany:  The IFO Institute’s January business confidence index pulled back to a seasonally-adjusted 95.9, short of both the December reading of 96.3 and the expected figure of 97.0.  The expectations index fell to 92.9 from 93.8.  Although German activity has improved a bit in recent months, the data suggests the economy remains anemic. 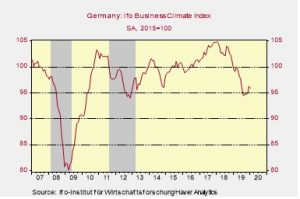 India:  The government said it plans to sell its entire stake in Air India after its proposal two years ago to unload 76% garnered no interest.  Officials also lowered the amount of debt that would be passed on to any buyer.  The proposal is positive for Indian stocks, as it appears to show the government’s commitment to push through meaningful privatizations.

Iraq:  Cleric Moqtada al-Sadr reversed course and withdrew his support for antigovernment protestors, after many of them criticized him for trying to hijack their movement for his own political gain.  Despite al-Sadr’s withdrawal of support, and a new effort by police to get control of the situation, mass demonstrations against the government are being held again today.  Separately, a suspected militia rocket attack struck the U.S. Embassy and injured one person yesterday.  It was reportedly the first known direct hit on the Embassy compound.

[1] Actually, we have been worried about the flu for some time; the fourth WGR we wrote in 2006 was on Avian Influenza.