In Europe, we are monitoring a couple of political developments.  First, the Social Democratic Party of Germany (SPD) has a new leader, Martin Schulz, and he is apparently looking to run against Chancellor Merkel.  The CSU/CDU conservative parties, led by Merkel, are currently governing with the SPD.  It doesn’t appear to us that one could create a government by excluding either the mainstream conservatives or socialists, but the composition of power could change.  In other words, if the SPD does well in the November polling, the CSU/CDU/SPD coalition could remain but the SPD might win more positions of influence in the government.  Currently, Schulz’s popularity rivals Merkel’s.  If the SPD gains more power, it may be more willing to expand fiscally and reduce pressure on the southern tier nations by boosting imports.

We are also watching reports that French authorities have opened an investigation of embezzlement against François Fillon, the current leading presidential candidate representing the establishment-right in France.  According to reports, authorities are investigating whether Fillon’s spouse was paid €500k of public money for a “no-show” job over an eight-year period.  There were two jobs, one as Fillon’s parliamentary assistant and one as assistant to Marc Jouland, who took Fillon’s seat when he became a government minister in 2002.  It should be noted that hiring family members is not illegal in France (about 10-15% of members of Parliament practice nepotism), but it would be against the law if Penelope hadn’t actually done anything.  Fillon has been running as a right-wing candidate in the Reagan/Thatcher mode, which is unusual for France.  He is calling for sharp cuts in government spending and a reduction in government jobs; he has also been supportive of ending Russian sanctions.  French presidential elections can go two rounds if no candidate wins a majority.  In the second round, only the top two candidates participate.  There are currently three candidates, Fillon, Marine Le Pen of the National Front and Emmanuel Macron, running as an independent (although a Socialist, he is offering free market positions, almost a center-right platform).  The Socialists are still deciding on a candidate.  There has been some speculation that if the current polls are accurate and there is a runoff between Fillon and Le Pen, leftist voters may lean toward the National Front which could bring a populist who wants to leave the Eurozone.  If the charges against Fillon stick, it might reduce Le Pen’s chances, although we tend to think it will simply upend the election and make it harder to predict.  Anything that boosts Le Pen will likely be taken as bearish for the EUR.

We monitor a number of issues in our analysis, in part, to turn “black swans” (issues that are completely unexpected, called “unknown/unknowns”) into “grey swans” (“known/unknowns”).  Infectious disease is one of those factors.  The NYT is reporting that the WHO is monitoring a bird influenza circulating in China that seems to have a rather high mortality rate.  The strain, called H7N9, has been present every winter in China since 2013; more than 1,000 cases have been reported over the past four years with a 39% mortality rate.  So far this year, 225 cases have been confirmed and China is about to embark on the New Year’s migration, where millions of Chinese migrate home for the weeklong holiday.  Vacation travel can increase the likelihood of transmission as travelers mix in close quarters.  This strain has mostly affected those directly involved in poultry farming and processing (it is a bird-flu), but there are two suspected cases of human-to-human transmission; if the virus can be directly transmitted, it could indicate it has mutated into a more dangerous influenza.  Influenza pandemics have the potential to slow global growth as illness and precautions against contracting the disease affect spending and travel.  At this point, this strain remains contained but it does bear monitoring.

Comparing the seasonal pattern to the current inventory accumulation is supportive.  Although it is early, oil inventories are rising slower than average.  To justify current prices, inventories will need to decline this year.  As the chart shows, that process should begin in earnest in Q2. 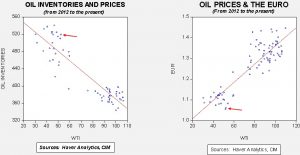 Based on inventories alone, oil prices are overvalued with the fair value price of $39.96.  Meanwhile, the EUR/WTI model generates a fair value of $37.71.  Together (which is a more sound methodology), fair value is $36.63, meaning that current prices are well above fair value.[1]  OPEC has managed to lift prices but maintaining these levels will be a challenge given the dollar’s strength and the continued elevated levels of inventories.

[1] The forecast that uses both independent variables is lower than the two separate models because the €/$ exchange rate and oil inventories are highly inversely correlated at -89%.  In theory, it appears that some investors may be using oil inventories as a way to protect against dollar weakness.