[Posted: 9:30 AM EDT] Equities are rallying around the world.  Here is what we are watching this morning:

Venezuela: As we noted yesterday, China and Russia[1] would be on the hook for billions of bad debt that a new government could simply default on, arguing the debt was incurred by an illegitimate government.[2]  China usually tries to avoid taking outright positions on international issues, a legacy from the Mao-Deng years.  At the same time, if it doesn’t get involved, it could lose billions.[3]  China is officially supporting Maduro but the endorsement is far from ringing.  Senior military officials have signaled they continue to back Maduro.[4]  However, it is unclear if the upper ranks can continue to control the sentiment and behavior of the lower ranks.  There is also an impending concern about U.S. embassy staff.  Maduro has ordered them to leave this weekend, but Pompeo indicated earlier that the diplomats will stay because the U.S. no longer recognizes Maduro as the legitimate ruler of Venezuela.  Apparently prudence has partially overruled valor and the U.S. has ordered non-emergency staff out of the country and “advised” other Americans to leave.[5]  But, senior diplomats will stay and the embassy will stay open, creating the potential for conflict.  It is important to remember that Trump is a classic Jacksonian; an attack on the embassy would almost certainly trigger a military response.

Here is a snapshot of global allegiances toward Maduro and Guaido. 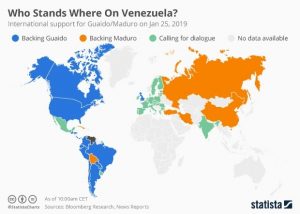 As we discuss below, this week’s DOE data was decidedly bearish as crude oil inventories rose sharply.  We are seeing steady to higher oil prices this morning, in part due to the fact that oil and equities have been positively correlated recently (both are reflecting sentiment about economic growth),  and probably also on expectations of at least a short-term disruption of oil flows from Venezuela.  We also note that Venezuelan bonds, many of which are in default, are rallying on hopes that Maduro will go and the new regime will be willing to restructure and service the bonds.[6]

Fed policy: Two items of note.  First, the FOMC is reconsidering its balance sheet normalization plan and may end its reduction much sooner than planned.[7]  Our position on the balance sheet is that the actual impact is difficult to determine, but the primary value of QE was psychological; it showed the Fed still had policy tools available even after the fed funds target hit zero.[8]  Although we doubt stopping the reduction of the balance sheet would have any “real” effects (other than to keep bank reserves excessive and keep the money multiplier and velocity depressed), there will almost certainly be a positive reaction in financial markets due to the psychological effects.  Second, reflecting comments we have made recently about the two open governor positions, the administration signaled it is “looking for doves.”[9]  This adjustment is very important because the appointment of two committed doves would weaken the Fed’s ability to hike rates.  Although not set in stone, two persistent dissents from governors would tend to undermine Powell’s position and could lead to his resignation.[10]

This is the seasonal pattern chart for commercial crude oil inventories.  We would expect to see a steady increase in inventories that will peak in early May.  This week’s increase, though well above expectations, was mostly in line with seasonal norms. 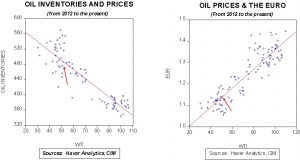 Based on oil inventories alone, fair value for crude oil is $59.05.  Based on the EUR, fair value is $55.52.  Using both independent variables, a more complete way of looking at the data, fair value is $56.03.  By all these measures, current oil prices are generally in the neighborhood of fair value.  However, we still expect prices to move toward $60 in the coming weeks, but rising oil inventories will tend to be a bearish factor for the market.  Still, assuming the roughly current price of $53.00 per barrel and a steady EUR, the market has already discounted a 25 mb rise in inventory levels.  A rise of that level, assuming we continue to track the usual seasonal pattern, would occur in early to mid-March.  If inventories rise to their normal peak and the dollar remains stable, oil prices would be fairly valued around $50.50.  Thus, the markets haven’t completely discounted the normal inventory build but have assumed part of it.

[2] Russia is well aware of this ploy.  It refused to service Tsarist bonds for years.

[3] China is owed around $55.0 bn from Venezuela. https://www.scmp.com/news/china/diplomacy/article/2183519/wary-china-offers-support-embattled-venezuelan-president