Happy Friday!  Davos continues, and the coronavirus continues to dominate the news on the eve of the “year of the rat.”  Here is what we are watching this morning:

Coronavirus:  The virus has now been blamed for 25 fatalities and has infected an estimated 830.  Confirmed cases have been reported in China, Japan, South Korea, Macau, Taiwan, Singapore, Vietnam and Hong Kong.  China is clamping down on travel in a bid to contain the virus’s spread.  Eleven cities have some degree of a travel ban, and Disney’s (DIS, 142.20) Shanghai resort has closed.  Casino stocks fell on reports of the infection being found in Macau.  Even parts of the Great Wall have closed.  Hospitals are struggling to deal with the influx of patients.  Both the U.K. and Italy are investigating potential cases.  One model of epidemics puts the actual infection rate at closer to 4k.  So far, this new virus does not appear to be as virulent as SARS; it has caused fewer deaths and those who have died have tended to be elderly with other chronic conditions.  S&P estimates the event could reduce China’s GDP this year by 1.2%.  The CNY has weakened as the virus has spread.  Due to expectations of an influx of Chinese tourists amid the Lunar New Year holiday starting today, Japanese officials are beefing up airport screening against the Wuhan coronavirus.  They are also tightening their plans for a potential pandemic during the Tokyo Olympic Games this summer.  At least one Olympic-related boxing match has already been canceled in Wuhan, and a women’s qualifying soccer match was moved to Nanjing.

The underlying market questions from this event are how deep and how long?  In other words, how big of a decline will this trigger and how long will it last?  The SARS history does offer some clues and it suggests that it will have a rather large impact but it won’t last long.  Note the pattern of China’s consumer confidence: 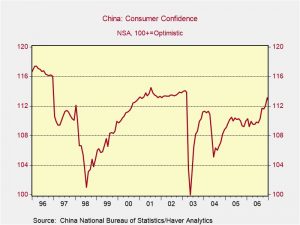 SARS occurred in 2003; it clearly had a short-term impact on consumer confidence.  On the other hand, industrial production did drop but also recovered quickly. 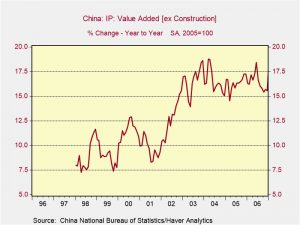 The comparisons to 2003 do have problems; the Chinese economy was in a robust growth phase.  That is not the case now.  But, the most likely outcome is that this will be a short-term event.

Eurozone:  IHS Markit today said its composite purchasing managers’ index for the Eurozone came in at a seasonally adjusted 50.9 in January, matching the December reading but falling short of the expected reading of 51.2.  The index is designed so that readings over 50 point to expanding activity, so the January figure suggests the Eurozone economy continues to grow at a lethargic pace.  One bright spot, however, was that the manufacturing PMI rose to 47.8.  That still points to contraction in the factory sector, but it is better than the reading of 46.3 in December and it beat the expected reading of 46.8.  IHS Markit also released its single-country indexes, which showed significant improvement in the all-important German manufacturing sector.  Germany’s manufacturing PMI beat expectations by rising to 45.2 from 43.7 previously.  France’s manufacturing PMI was better as well, rising to 51.0 from 50.4.  In sum, the figures provide a glimmer of hope that the Eurozone economy could be turning the corner.  The figures are therefore boosting European stocks so far today.

United Kingdom:  The flash IHS Markit/CIPS composite purchasing managers’ index for the U.K. rose to a seasonally adjusted 52.4, smashing the December reading of 49.3 and handily beating the expected reading of 50.7.  The January index for manufacturing beat with a rise to 49.8, but, because of the dominance of Britain’s service sector, the key index for the country is its services PMI.  That index jumped to 52.9 in January, reaching its highest level since mid-2018.  The figures suggest the British economy is bouncing back nicely from the Brexit debate.  Even though the figures undermine any expectations for a new cut in interest rates, they should be positive for British stocks going forward.

United States-China:  The Commerce Department’s proposed rule that would make it harder for U.S. firms to sell to Chinese telecom giant Huawei (002502.SZ, 2.99) from their overseas factories is reportedly being resisted by the Defense Department on grounds that hurting the U.S. firms’ sales would damage their ability to conduct research and development.  The news highlights the split within the Trump administration when it comes to China policy.

Europe-Iran:  Even though Germany, France and Britain last week triggered a dispute-settlement mechanism under the 2015 nuclear deal with Iran, European diplomats now say they won’t reimpose sanctions on the country unless it significantly ramps up its violations of the agreement.  However, it’s not clear whether Iran would hold the line on its nuclear activities, given that its leaders are probably still itching to take revenge for the U.S. killing of Gen. Qassem Soleimani earlier this month.

United States-Iraq:  In protest against the U.S. killing of Gen. Soleimani on Iraqi soil, tens of thousands of Iraqis have launched a demonstration calling for U.S. troops to be expelled from the country.  The protest is being led by an old foe of the U.S., the Shiite cleric Moqtada al-Sadr, who was the first Shiite leader to call for armed resistance after the U.S. invasion of Iraq in 2003.  We suspect he is being egged on by the Iranians, who would likely consider a U.S. expulsion from Iraq to be sweet revenge for the killing of Gen. Soleimani.

A tale of railroads:  Union Pacific (UNP, 187.19) is adopting “precision-scheduling railroading,” which is a plan to run fewer trains on tighter timetables with more cars.  It is improving efficiency at the cost of 3,000 jobs.  This is a truism of economics; productivity improvements coupled with slow growth usually mean that the benefits of the productivity enhancement goes to capital.  Labor’s participation in the improvement is usually reliant on a stronger expansion.  In other words, if the economy is robust, those 3,000 workers will easily find other work.  But, if it’s not, they may become unemployed.  In the current situation, the most likely problem is that these displaced workers will find jobs but at a lower pay than their current ones.

FICO:  The FICO score is the backbone of modern consumer finance.  Prior to the development and adoption of the FICO score, the creditworthiness of households was determined by individual loan officers.  The officers relied on the specific knowledge of the community; the system generally worked well but was inefficient.  The FICO score allowed a lender to quickly ascertain a borrower’s creditworthiness without community knowledge.  This not only fostered national lending (as opposed to local lending only) for households, but it also gave financial firms the ability to efficiently securitize loans to build bonds that could be sold to investors.  For consumers, the FICO score can determine access to credit and the cost of borrowing.  The Fair Isaac Corporation (FICO, 415.08) is adjusting its scoring system to pay closer attention to rising debt levels and trigger downgrades faster for borrowers in arrears.  The expected outcome will be a wider gap between safe and risky borrowers and make it more difficult for risky borrowers to access credit.  It remains to be seen if this change will affect consumption.

In the details, U.S. crude oil production was unchanged at 13.0 mbpd.  Exports fell 0.1 mbpd, while imports fell the same amount.  The decline in stockpiles was unexpected.

This chart shows the annual seasonal pattern for crude oil inventories.  This week’s decline was a bit below normal.  As the chart shows, oil inventories usually rise into late spring and then decline significantly into late summer.  Last year, this pattern was disrupted to some extent because of exports. 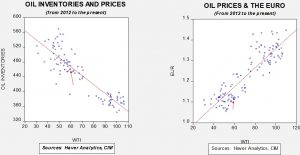 Based our oil inventory/price model, fair value is $64.53; using the euro/price model, fair value is $50.92.  The combined model, a broader analysis of the oil price, generates a fair value of $55.18.  We are seeing the divergence between dollar and oil inventories narrow as dollar weakness persists.  Given the level of geopolitical risk, prices have not moved significantly above the inventory fair value price, although the combined model would suggest a richly valued market.  With inventories poised to rise seasonally and tensions seemingly easing, softer prices are more likely in the coming weeks.  The recent epidemic in China has been a bearish event for oil prices.