[Posted: 9:30 AM EST] The big market mover this morning is the dollar.  Here is what we are watching:

Treasury shift?  During the 1980s into the 1990s, U.S. Treasury secretaries frequently tried to move the currency markets.  James Baker was part of the Paris Accord in 1985 that led to a massive dollar depreciation and Lloyd Bentsen openly called for a stronger yen.  But, Bob Rubin declared a truce in the mid-1990s by indicating that, going forward, the U.S. would always support a “strong dollar.”  The content of the policy was hollow; strong was never defined and could have easily meant that the paper didn’t tear easily.  Nevertheless, what Rubin really signaled was that the U.S. would no longer try to adjust exchange rates by jawboning.  Instead, the policy of the U.S. Treasury was that markets should set the exchange rate and the U.S. would not intervene.  For the most part, Treasury secretaries since have followed this policy.[1]

This morning, Steven Mnuchin appears to have ended the Rubin policy, openly declaring at an event in Davos that a weaker dollar is “good” for American trade.  If one wanted to send a clear message, it would be difficult to find a better venue.  Key political and business leaders are all in Switzerland (the president arrives tomorrow, by the way) and so either this statement was (a) an incredible blunder, or (b) clearly calculated to signal the U.S. is going to become more active in trying to close the trade deficit and will use a weaker dollar as one tool (trade impediments could be the other) to accomplish this goal.  We think it’s probably (b).  The fact that his comments are occurring just after the U.S. announced new tariffs is probably not a coincidence.

As one would expect, the dollar has fallen on the comments.  Gold prices have also lifted.  Foreign equities are coming under pressure, but there is mostly a net gain for a dollar-based investor.

In addition to Mnuchin’s remarks, Commerce Secretary Wilbur Ross indicated that “trade wars are fought everyday…the difference is that U.S. troops are now coming to the ramparts.”  Both Mnuchin and Ross indicated that further trade actions are likely in the areas of intellectual property, steel and aluminum.  We expect the president to support these comments during his visit tomorrow.

Here are a couple of interesting charts.  First, a weaker dollar will tend to push up import prices. 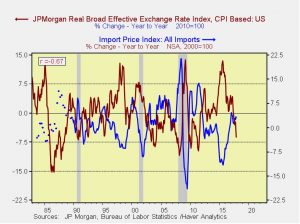 This chart shows the yearly change in the JPM dollar index and import prices.  The two are rather highly correlated.  However, we would note that the correlation between import prices and core CPI is not all that strong, only about 31%, and import prices lead CPI by about 18 months.  So, a significant weakening of the dollar will eventually push up inflation, but not for a while.

The dollar’s impact on trade isn’t all that clear. 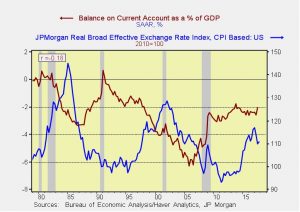 What is interesting is that it takes a rather large depreciation to affect trade and the trade deficit worsens in the initial stages of the dollar’s decline.  This is known as the “j-curve” effect.  What we haven’t seen before is protectionism and dollar weakness at the same time.  That combination would likely be inflationary.

Meanwhile, the rest of the world puts on a brave face: Canadian PM Trudeau announced that his nation has concluded discussions for a new Pacific Rim trade agreement to replace the TPP.  Although the agreement is expected to be signed in March, we view it as a shell; without the U.S. being part of it, it is hard to see who will play the role of “importer of last resort” that these multilateral trade agreements need.

Going forward: As the administration moves on from its tax reform victory, it appears the next shift will be trade policy, which is almost certain to be protectionist.  Unlike the tax deal, trade interference will not be universally accepted by the business community.  We have not commented extensively on Special Council Mueller’s investigation because we believe, at their core, the outcomes of such investigations are dependent on politics.  Thus, as long as the GOP controls Congress, the president is probably in no danger of censure or impeachment.  However, that could change if establishment Republicans, who have gotten what they most wanted, a tax cut, see the turn against trade as a threat to business and support Mueller’s investigation.  We don’t think we are anywhere close to that yet, but it is a potential development that bears watching.

Powell wins, Goodfriend struggles: As expected, Jay Powell easily won confirmation as the next Fed chair.  Markets expect Powell to maintain Yellen’s policies, although we reiterate that we really don’t know what Powell’s positions are on monetary policy.  He is not an economist and we have no trail of position papers to examine his policy stances.  He was confirmed 84-13; the “nays” were actually quite interesting, mostly the extreme left and right of the spectrum.  How often do you see Elizabeth Warren (D-MA) join Ted Cruz (R-TX) and Rand Paul (R-KY) in a vote?  Meanwhile, Marvin Goodfriend faced a much more hostile questioning from senators.  He did indicate he supports the dual mandate (after stating publically that the Fed should only focus on inflation) and was asked why he predicted a jump in inflation if the unemployment rate fell below 7%.  If Goodfriend is confirmed, it will probably be along party lines.

Germany: The SDP has noted a surge in membership applications, which may be caused by left-wing activists trying to expand the rank and file to vote against joining the CDU/CSU in a grand coalition.  If that coalition vote fails, Germany will likely be forced to hold new elections, unprecedented in the postwar experience.

Venezuela: President Maduro indicated he wants to call new elections for the end of April in a bid to solidify his political power.  On the one hand, it’s really difficult to imagine Maduro winning re-election given the horrible state of the Venezuelan economy.  For example, recent studies show that 75% of the population has lost an average of 19 pounds due to the lack of food.[2]  However, the opposition is divided and so polarized that Chavistas will vote for Maduro rather than any opposition figure regardless of the state of the economy.  As conditions worsen, it is likely that oil production will continue to decline, which is bullish for prices.

[1] The notable exception was George W. Bush’s first Treasury secretary, Paul O’Neill.  As a former executive of an industrial metals firm, he noted the dollar’s strength in the early part of the century and suggested it was overvalued.  There was a firestorm of negative comments and O’Neill rapidly retreated from his comments and said that if there was an official change in the strong dollar policy, he would invite all interested parties to Yankee Stadium for the announcement.