Davos continues, the ECB meets, but it’s the coronavirus dominating the news.  The U.S. is setting its trade sights on the EU.  Here is what we are watching this morning:

Coronavirus:  The latest death toll is 17 and the number of confirmed cases now exceeds 600.  According to reports, the majority of fatalities are older men who, like many older people, had other chronic conditions.  On the surface, the Chinese government is acting decisively to contain this outbreak.  It has now banned travel from four cities, including Wuhan.  Despite the show of force, there are persistent reports of underreporting of potential cases, especially among younger people.  Meanwhile, we continue to compare this event to the 2003 SARS epidemic.  However, the conditions in China are significantly different from 17 years ago; one major change has been the spread of mass transportation.  Simply put, it’s a lot easier for infected people to move about, increasing the chances of spreading.  This likely explains the quarantine; however, it is unclear how effective the ban will be.  We are seeing two important market events.  First, as one would expect, Chinese equities are taking a hit over the outbreak.  Second, worries that the outbreak will slow global growth have been bearish for crude oil.  Seasonally, crude oil tends to weaken this time of year so fears surrounding the coronavirus have been yet another bearish factor.

Trade:  The focus on trade is now shifting to the EU.  The EU’s tactics up to this point have been to offer modest proposals and avoid direct confrontations with the U.S.  This action is similar to how China initially dealt with the White House, but clearly the administration was not placated.  So far, Treasury Secretary Mnuchin and Commerce Secretary Ross have been the point persons in the U.S. to the EU.  This was true with China for a while.  But, the real “game” doesn’t start until USTR Lighthizer shows up.  This trade situation could get quite messy.  First, we are only nine months away from U.S. elections; the EU likely hopes it will deal with a new president.  Second, the EU is, by design, a slow-moving body and it isn’t obvious it can react quickly if the U.S. starts applying tariffs.  Third, the EU really wants to apply digital taxes; we suspect this will be a red line for the U.S.  Fourth, the EU is considering CO2 border adjustment taxes, which would apply a tax on the EU but also to imports based on the carbon policies of their trading partners.  This action would be an anathema for the U.S.  Fifth, U.S. exports to the EU are much higher than China; on a rolling-four quarter basis, it is 3.7x larger.  Thus, the EU will have many more targets to apply retaliatory tariffs on the U.S. compared to China. 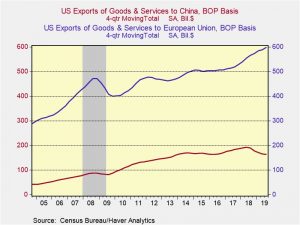 ECB:  Although the press conference was still underway at the time of this writing, policy remains unchanged.  We are starting to hear pushback from Eurozone bankers on negative interest rates.  We suspect they are trying to see what sort of influence they will have with Legarde; they clearly got nowhere with Draghi.

Canada:  The Bank of Canada yesterday kept its benchmark short-term interest rate steady at 1.75%, right where it has been since October 2018.  However, by cutting its forecast of near-term economic growth, the policymakers also laid the groundwork for a potential cut in rates sometime in the future.

Russia:  In a unanimous vote by ovation, the lower house of parliament gave first-reading approval to President Putin’s proposed constitutional changes, which will allow him to continue ruling Russia even after his term as president expires in 2024.  Once the amendments get through two more readings in the lower house, they need to pass the upper and a promised referendum.

Saudi Arabia:  United Nations investigators have concluded that Jeff Bezos, the founder of Amazon (AMZN, 1,887.46) and owner of the Washington Post, had his cell phone hacked via a WhatsApp account linked to Saudi Crown Prince Mohammed bin Salman.  Shortly after Bezos and bin Salman traded phone numbers at a meeting in April 2018, bin Salman sent Bezos a video containing secret spyware, possibly to gain information on former Post columnist Jamal Khashoggi, whom the Saudis murdered in October 2018.  The hack may have also allowed the Saudis to release compromising information on Bezos’s extramarital affair last year.  The UN researchers, who were hired by Bezos, have asked the U.S., Saudi Arabia and other countries to investigate the matter.  The incident underlines the crown prince’s risky adventurism as he takes a more aggressive tack on Saudi national security.

United States-Iran:  Brian Hook, the U.S. Special Envoy for Iran, said in an interview that if the new leader of the Islamic Revolutionary Guards’ overseas force behaves as previous leader Gen. Qassem Soleimani did, he would meet the same fate.  In other words, he would be subject to possible assassination by the United States.