[Posted: 9:30 AM EDT] Back to the salt mines!  The New Year, 2019 (hard to believe, isn’t it?), is starting out with a thud as weak Chinese data has sent equities into the red.  Here is what we are watching this morning:

The Chinese data: The PMI data[1] from China came in soft, with the Caixin PMI dipping under the expansion line of 50 with a reading of 49.7 in December.  This is the first time since May 2017 that the number has fallen below 50.  The official PMI report, which came out on New Year’s Eve, was also under 50 at 49.4.  Although the equity market mostly shrugged off the earlier report, the combination of both numbers under the expansion line has clearly raised fears that the Chinese economy is slumping.  And, the usual response from policymakers, which would be strong stimulus, seems to be lacking this time.  For example, the central government is warning local governments to avoid pushing property and real estate development to boost output.[2]  Although the position of the central government makes sense (boosting apartment building would likely only bring further overcapacity and bad debt), China may be moving into the phase where it can no longer rely on investment for growth.  In other words, China may now need to get serious about boosting consumption as its engine of growth.  The problem is that (a) consumption would have to grow very fast to absorb the excess capacity, and (b) this path will have significant political consequences as it will upend the business model that has made important members of the CPC billionaires. 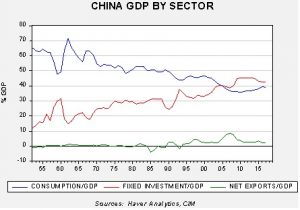 This chart shows China’s GDP by sector in percentage terms.  A developed economy generally has consumption around 60% to 70% of GDP.  China’s development model was based on investment and net exports, which were funded by household saving, mostly through suppression consumption.  Although this model delivers strong growth, eventually excess capacity develops as investment becomes excessive and the “safety valve” of exports becomes stretched as foreign nations rebel against the loss of market share and unemployment.  One way China could address this issue would be to shift ownership of state owned enterprises to households; the increased wealth would likely boost consumption (wealth effect) but it would deny ranking members of the CPC the avenue to power.  This is why Beijing’s decision to signal to local governments that real estate development won’t be supported is important because it indicates that investment, at least for now, won’t be the path to support growth.  Unfortunately, the Xi government hasn’t signaled how growth will be lifted.[3]

Washington unrest: There are two items of concern, the shutdown and the Right-Wing Establishment (RWE) rebellion.

Shutdown: The partial government closure has moved into 2019.  Congressional leaders are meeting with the president today.  The Democratic House leadership is preparing legislation to end the shutdown that will not include the $5.0 billion for border wall funding.  It’s hard to see how the president won’t veto the bill and McConnell has already indicated he won’t approve a House bill that the president won’t sign.  For now, the shutdown isn’t having much impact on the economy or, for that matter, the financial markets.  But, it is causing individual hardship and we would not be surprised to see national park managers begin to close their facilities because they don’t have enough personnel to secure them.  That outcome is bad publicity and will increase pressure for an agreement.

Rebellion: Before the break, we noted there was growing pushback against the president from the RWE.  The situation with General Mattis was a key element in the criticism of the White House.  The latest censure comes from the newly elected senator from Utah, Mitt Romney.[4]   The op-ed, printed in the Washington Post, is a textbook response from the RWE.  Romney applauds the president’s policy successes of cutting corporate taxes, reducing regulation, appointing conservative judges and attacking China’s unfair trade practices.  What he slams the president on is character.  As we have noted before, until January 2018, the president’s policy mix was establishment-supportive by cutting taxes and regulations.  And, the financial markets rewarded the president with a strong rally.  But, once the president moved to a serious attack on global trade, the equity markets began to stumble and are now in bear market territory.  Although the RWE would like relief on technology transfers to China, it does not support tariffs or wants to see the loss of globalization, something the president favors.  Trump has responded to Romney’s comments via Twitter[5]; as these responses usually go, this one was actually rather tame (no new nicknames for Mitt, for example).  Romney is in a position to be critical of Trump; he is a senator, meaning he doesn’t face election for another six years, and he is nearly unassailable in his home state.

There are other new critics as well.  Retired Gen. Stanley McChrystal sent a broadside against the president, calling him “dishonest, immoral.”[6]  Trump’s response was more typical.[7]  Retired Gen. David Petraeus indicated he wouldn’t serve in a Trump administration.[8]  Probably the key issue that has led to the attacks from former generals is the sudden withdrawal from Syria.  In response, the White House is slowing the withdrawal to about four months instead of weeks.[9]

The key question politically is whether Trump can win the 2020 presidential election with only the support of Right-Wing Populists (RWP).  Much of that will be determined by who the Democrats nominate.  Sen. Warren put her name on the list over the holiday.  We would expect at least 19 more to participate in the nomination process.  The conventional wisdom will be to run a Left-Wing Establishment (LWE) figure (e.g., Mayor Bloomberg, VP Biden) that would act as a “unifier.”  This temptation will be strong; the GOP faced a similar situation in 2012 and lost by nominating Mitt Romney who failed to generate enthusiasm among the RWP.  A similar move by the Democrats is possible, which would improve the odds of another term for President Trump.  On the other hand, a Left-Wing Populist (LWP) would very well leave the financial markets with no favored candidate.  That outcome would justify the current weakness in equities.

Trade with China: We think the odds favor a short-term deal with China that would offer relief to the equity markets.  Trade Representative Lighthizer appears to oppose this outcome.[10]  The problem for Trump is that if he orders Lighthizer to make a temporary agreement, the latter might walk.  Although Lighthizer’s exit would be welcomed by the equity markets, it would seriously undermine the president’s efforts to change China’s trade behavior.

Taiwan: General Secretary Xi threatened to unify the island with the PRC.[11]  Although we still view such comments as rhetoric and not a call to arms, if China decides it needs a “splendid little war” to assert its power in the region then a forcible unification of Taiwan with the mainland would be attractive.  This issue did not reach a level to make our 2019 Geopolitical Outlook[12] list; however, it may reach this status by mid-year.

Italian banks:The ECB has appointed temporary administrators[13] to Banca Carige (CRG-IT, EUR .0015).[14]  Although the Italian government mostly caved to EU demands on its budget, the problems with Italian banking have not been resolved and could still trigger a problem in the Eurozone.