Happy Friday!  Equity markets continue to grind steadily higher to new record levels.  The White House officially nominated the two last open governor positions on the FOMC.  An update on the Iran missile attack and other Iran issues.  Germany is holding a summit on Libya; it is also in an uncomfortable position with China.  The 20-year Treasury is coming back (call Youshi).  Here is what we are watching this morning:

The Fed:  Although the names have been circulating for some time, the White House has finished its background checks on Judy Shelton and Chris Waller.  The latter is non-controversial.  He is the research director at the St. Louis FRB and a conventional pick.  That isn’t to say there is nothing interesting about the selection.  We suspect the St. Louis Fed President, Jim Bullard, has designs on the Fed Chair job.  There were rumors that Bullard was being considered for the open governor’s position.  He quashed that rumor quickly but offered his research director instead.  This serves two purposes: if Bullard does get the nod to replace Powell, he will have an immediate ally among the governors and, in the meantime, the composition of the board will become more dovish.

Shelton is another issue.  She has argued that the Fed probably shouldn’t be in the business of setting interest rates.  She has shown an affinity for the gold standard, but also seems to want to manage exchange rates in a manner to boost U.S. trade competitiveness.  There were elements of the supply-side movement that wanted a gold standard, apparently, in part, to provide inflation-fighting credibility to address the fiscal expansion this group supported.  This idea of “weaponizing” the dollar has been circulating recently; we addressed it in a WGR (Weaponizing the Dollar: The Nuclear Option, Part I and Part II).  We expect opponents to Shelton to raise a rule that a Federal Reserve District cannot be overrepresented on the FOMC.  Since Shelton and Brainard are both from Richmond, this could be raised as a problem.  However, this rule has been ignored in the past, so if it is raised here it would suggest senators are looking for a reason to scuttle her nomination.  Overall, we expect both to be nominated, although Shelton will be controversial.

The following table shows how the FOMC will change if they are nominated.

These are our estimates of policy leanings, with 1=most hawkish to 5=most dovish.  We are assuming both of the new candidates are extreme doves (otherwise they wouldn’t have been nominated), with Waller being a traditional dove while Shelton is a political one.  This means that if there is a change in administration, Shelton could become less dovish.  The governors now are leaning dovish (going from 3.00 to 3.57) and the overall voting changing from 2.90 last year to 3.33 this year.  This means that the hurdle for rate hikes has increased markedly.  We would view these nominations as bullish for risk assets.

Iran:  Upon further review, there were injuries from the Iranian missile attack.  Eleven service members suffered concussions from the blasts and have received treatment.  We doubt this news will change the U.S. response.  For the first time in eight years, Ayatollah Khamenei will lead Friday prayers today.  He delivered a sermon that blasted the U.S. and the EU, but did not specifically signal further retaliation.

Libya:  Chancellor Merkel is holding a meeting of the two warring groups in Libya in an attempt to reduce tensions in the divided nation.  The two sides appear to be abiding by a ceasefire for now.  Although we have little hope that the meetings will lead to a lasting peace (division into two nations is probably the best solution), the longer a ceasefire holds the greater the chance that Libyan oil production rises.

Germany and Huawei:  The U.S. is pressuring Berlin to ban equipment from Huawei (002502, CNY 3.13).  Germany has been reluctant to do so, in part, because China is threatening German car sales in China.  China is the largest market for German automakers.  In fact, Germany is facing a similar threat from the U.S.; the Trump administration has been considering tariffs on EU auto exports to the U.S. to address the trade deficit with the region.

China’s GDP:  The Chinese government said fourth-quarter GDP was up 6.0% from one year earlier, matching the annual growth in the third quarter but coming in short of expectations for a slight acceleration.  GDP for all of 2019 rose 6.1% from 2018, marking the slowest full-year growth rate since 1990.  On the other hand, other Chinese data today suggests the economy may have started to firm toward the end of the year.  For example, December industrial production was up 6.9% year-over-year compared with a 6.2% gain in the year to November.  December retail sales rose steadily by 8.0% from a year earlier.  These figures suggest the economy may have gotten a bit of a boost as companies and consumers began to sense that the U.S.-China Phase One trade deal would really be signed.  However, we doubt the economy is totally out of the woods.  China is still struggling with longer term issues like poor demographics, high debt levels and general maturation.  Moreover, implementing the new trade deal could be a challenge, and the Trump administration may well keep up its pressure for disruptive policy changes.  That helps explain why the data only gave a slight boost to Chinese stocks and the renminbi today. 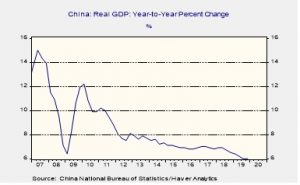 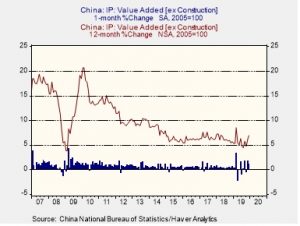 U.S.-India Trade:  Officials in the U.S. and India are drafting a “limited” bilateral trade deal that could be unveiled during a visit by President Trump to New Delhi in the coming weeks.  The deal would address some longstanding U.S. concerns about India’s market restrictions, while restoring India’s preferential trade status and ability to export to the U.S. duty-free.  The news is probably bullish for Indian stocks.

Odds and ends:  USMCA formally passed the Senate.  Birth rates in China and Italy continue to plunge, reflecting falling birth rates in the industrialized world.  The government is following through on its new data embargoing proposal, arguing its beefed-up systems can handle the data requests.  There is a threat to labor in France as automated trains are “breaking” the transportation workers strike.  Another fallout from Brexit: populists now have more seats than the Greens in the European Parliament.