[Posted: 9:30 AM EDT] Equities are drifting lower this morning.  Here is what we are watching:

Brexit: After facing the largest defeat in modern Parliamentary history, PM May survived a no-confidence vote but not by a great margin.[1]  We have been discussing Brexit at length, so we don’t have much to add this morning.  But, here are a few points:

Trade and China: One the one hand, we are seeing talks progress.  Vice Premier Liu has confirmed he will visit the U.S. for talks at the end of the month.[5]  On the other hand, actions against Huawei (002502.sz, CNY 4.23) and other Chinese tech firms are accelerating.  There is legislation in Congress designed to ban the sale of U.S. components to Chinese companies that violate U.S. sanctions or export control laws.[6]  These laws would force the administration to reduce tech trade between China and the U.S.  Meanwhile, the DOJ is investigating Huawei for stealing trade secrets.[7]  Essentially, U.S. and Chinese negotiators are trying to make some sort of trade deal while there are active steps being taken to restrict technology trade between the two nations.[8]  Although this would seem to doom current talks, we think both Presidents Trump and Xi are working on two time frames, short term and long term.  In the long run, both leaders realize the relationship between China and the U.S. is fracturing into a classic established versus rising superpower clash, a factor that will dominate the next decade.  However, in the short run, both need a deal that will boost confidence and economic activity.  Xi can clearly see that the Chinese economy is slumping and needs trade relief.  Trump can clearly see the U.S. economy is slumping and needs something to bolster confidence.  Thus, we can have a short-term agreement in the midst of what may turn out to be the next major global conflict.

On a side note, President Trump’s obsession with trade tariffs remains unabated.  He is expected to threaten car sanctions on the EU in order to open European agricultural trade.[9]  The EU has opposed opening the European market to American agriculture because it would upset the delicate system of preferences and subsidies that maintains peace in the EU.[10]

A depressed Beige Book: The Federal Reserve released the Beige Book yesterday, which is an overall survey of economic activity at the regional district level.  Although eight of the 12 district banks reported “modest to moderate” growth levels, and all reported tight labor markets, company sentiment is weakening on trade uncertainty and financial market volatility.  We note that many of the regional Fed manufacturing reports have weakened recently as well. We suspect the Beige Book report reflects the recent shift of a pause in tightening.[11]

An important defense signal: Germany is nearing a decision on replacing the Luftwaffe’s 85 Tornado fighters, a mid-1970s air platform.[12]  Berlin is considering either the Typhoon, an Airbus (EADSY, USD 26.37) plane built by a group of European nations, or one of three American platforms, the F-35, F/A-18E/F or the F-15E.  Selecting a U.S.-built aircraft would be welcomed by the Trump administration and might ease trade tensions.  However, shunning the Eurofighter will likely doom Airbus’s defense business to near irrelevance.  To some extent, it all comes down to Germany’s perception of NATO and future relations with the U.S.[13]  If Germany sees Trump as a “one-off,” a political accident that won’t be repeated, then it should select a U.S. airframe.  The Typhoon can’t carry nuclear weapons and thus can’t fulfill its treaty obligations with the U.S. that state European nations must provide aircraft for U.S. pilots carrying American nuclear missiles to protect Europe.  On the other hand, if Germany views Trump as a symptom of a deeper retreat from U.S. hegemony, a reflection of a trend rather than a fluke, then it will likely choose the Eurofighter, the Typhoon, because Europe will need its own indigenous airframe as the relationship with the U.S. becomes uncertain.  We will be watching to see what Germany decides in the coming months.

Tsipras survives: Greek PM Tsipras survived a no-confidence vote following the name-change vote in Northern Macedonia.  The margin was close, 151-148.  It looks like Greece will be heading toward elections soon as Tsipras is now running a minority government.[14]

A take on the labor markets: One of our most iconic graphs in this recovery has been the divergence between the employment/population ratio and the unemployment rate. 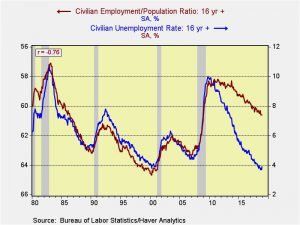 From 1980 to 2010, the correlation between these two series was -95% (the employment/population ratio scale is inverted on the above graph).  Adding the next eight years has reduced the correlation to the current level of -76%.  This chart represents the biggest unknown for monetary policymakers.  If the unemployment rate is the accurate representation of slack in the economy then the policy rate is too low and the Fed needs to tighten aggressively.  If the employment/population ratio is actually the better measure of slack then the Fed has achieved policy neutrality.

Confirming data supports both sides of the argument, although the preponderance of data tends to favor the employment/population ratio.  Until recently, wages have been stagnant and it is unclear whether the recent rise is due to demand or minimum wage legislation.  The labor force has tended to rise even when the unemployment rate would suggest that additions to the labor force should be difficult.  On the other hand, the JOLTS report shows that hires exceed job openings by a persistently wide margin.

A recent report from Axios[15] suggests that firms, facing a tight labor market, have taken unusual steps to draw the long-term unemployed back into the labor market with training and other forms of unconventional job support.  These include helping homeless people find housing, reliable transportation and childcare as part of the hiring process.  This population includes the recently incarcerated[16]or currently incarcerated.[17]

These reports suggest there is much more slack in the labor market than the unemployment rate indicates.  It is true that reducing this slack will depress profit margins; firms are required to deploy measures to find and employ these workers, costing money that they otherwise wouldn’t have to spend.  But, socially, this is a trend the Fed should support.

In the details, estimated U.S. production rose 0.2 mbpd to a record 11.9 mbpd.  Crude oil imports fell 0.3 mbpd, while exports rose 0.8 mbpd.  Refinery runs declined 1.5% and should continue to fall in Q1.  Product inventories rose significantly and the rise in product stockpiles will soon lead to a seasonal decline in refining activity.

This is the seasonal pattern chart for commercial crude oil inventories.  Starting next week, we would expect to see a rapid increase in inventories that will peak in early May.  If we follow the usual pattern, oil inventories will peak at 489 mb (excluding pipeline oil; including this oil adds approximately 31 mb, putting the total estimate at 520 mb).  Last year, inventories didn’t rise mostly due to oil exports.  We will be watching to see if that pattern repeats this year.

Based on oil inventories alone, fair value for crude oil is $61.61.  Based on the EUR, fair value is $56.08.  Using both independent variables, a more complete way of looking at the data, fair value is $57.37.  By all these measures, current oil prices are generally in the neighborhood of fair value.  However, we still expect prices to move toward $60 in the coming weeks.

[8] It’s not just the U.S.  https://www.reuters.com/article/us-germany-china-huawei/germany-considering-ways-to-exclude-huawei-from-5g-auction-report-idUSKCN1PA32B