[Posted: 9:30 AM EST] Financial markets were mostly quiet overnight.  Yesterday turned out to be a rare down day for equities but futures are signaling a higher opening this morning.  Treasury yields are modestly higher.  Here is what we are watching this morning:

A continuing resolution: Congressional leaders are likely to simply extend the government’s spending power for about a month and not resolve any of the underlying issues.  This means we won’t see an imminent government shutdown but will revisit the issue next month.  Yesterday, a special election in Wisconsin, in a heavily GOP district, went to a Democrat.  This was for the state Senate, so it doesn’t affect the U.S. Congress, but it does suggest the chances for a swing in November are rising.  Patty Schachtner, a rather centrist Democrat (her bio notes that she is a former member of the Wisconsin Bear Hunter’s Association), defeated a well-funded and solid assemblyman, Adam Jarchow.  Recent Democrat victories are further hardening the stance of the national party with the idea that their party’s chances are improving for November and thus the incentive is waning to negotiate with Congressional Republicans and the president.  As a result, we will likely see increased gridlock in Washington for 2018.  In the short run, this is probably bullish for equities; gridlock means the status quo remains in place and the status quo is favorable for stocks.  Longer term, political turmoil may become a bigger issue.

Fed policy: With the release of the CPI data we can update the Mankiw models.  The Mankiw rule models attempt to determine the neutral rate for fed funds, which is a rate that is neither accommodative nor stimulative.  Mankiw’s model is a variation of the Taylor Rule.  The latter measures the neutral rate using core CPI and the difference between GDP and potential GDP, which is an estimate of slack in the economy.  Potential GDP cannot be directly observed, only estimated.  To overcome this problem, Mankiw used the unemployment rate as a proxy for economic slack.  We have created four versions of the rule, one that follows the original construction by using the unemployment rate as a measure of slack, a second that uses the employment/population ratio, a third using involuntary part-time workers as a percentage of the total labor force and a fourth using yearly wage growth for non-supervisory workers. 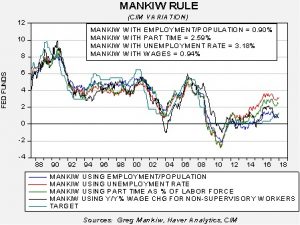