[Posted: 9:30 AM EST] The big news item over the long weekend was U.K. PM May’s indication that she is leaning toward what is being called a “hard Brexit.”  In general, a “soft Brexit” would mean the U.K. leaves the EU but the terms are such that not much changes.  In other words, financial institutions in London could still easily access EU markets and there would be a mostly unimpeded flow of EU member citizens across the U.K. border.  A “hard Brexit” is quite different—there would be a return to a stringent U.K. border and the free movement of EU members would no longer be in place.  If this is the U.K.’s definition of Brexit, the EU will almost certainly put up trade barriers on the U.K. and financial institutions in London will probably need to shift into one of the EU financial centers.

The U.K. establishment supported the Remain campaign.  With Brexit, they were leaning toward the soft option.  But May, reflecting the goals of the core Leave constituency, wants the hard option, which means the reestablishment of secure borders.  The EU likely won’t tolerate that decision and will treat the U.K. as an outside power, meaning new trade deals will need to be created.  May has also made clear that she is preparing to leave the EU whether or not there is a trade deal in place with the EU bloc.  Despite her apparent leaning toward a hard Brexit, she has stated that any deal made between the EU and the U.K. will need approval from both houses of Parliament.

The GBP slid on the news over the weekend, falling below $1.200 on fears that a hard Brexit will weaken the U.K. economy, but has since rallied due to the level of clarity provided.  We have seen a reversal in the pound this morning, which is likely due to short covering.  Although fears of a hard Brexit are reasonable, there is evidence that supports the notion that the financial markets, especially the exchange rate, have already discounted much of these concerns.  The chart below shows a simple purchasing power parity model of the USD/GBP relationship.  Purchasing power parity is a way of valuing exchange rates.  Also known as the “law of one price,” it assumes that the exchange rate will adjust to differences in prices between two nations.  Thus, if the cost of living is higher in one nation compared to another, the former will have a weaker exchange rate to ensure the costs of goods between the two nations are equal.  In practice, the method is far from perfect.  To work perfectly, all goods would need to be equivalent between nations and shipping costs would be zero.  Some goods are simply impossible to trade; they are either services that can’t be exported (e.g., haircuts), or impractical for trade (e.g., cooked to order meals).  To calculate parity, we create a ratio of CPI between the U.K. and the U.S.  This clearly isn’t a perfect match; the inflation indexes between the two nations have different baskets with different weights, reflecting the buying patterns in each nation.

Keeping these weaknesses in mind, we have found that parity models are useful at extremes. 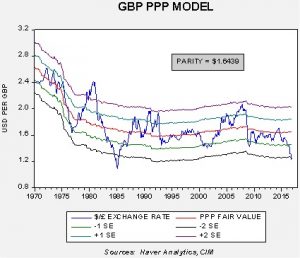 Note on this chart that when the exchange rate’s deviations near or exceed two standard errors, a reversal often occurs.  This doesn’t mean that the pound won’t remain weak in the near term; given worries about Brexit, we would not be surprised to see additional declines.  However, it should be noted that this is the weakest the GBP has been against the dollar since the Volcker dollar in the mid-1980s.  We would not be surprised to see the GBP recover soon after Article 50 is declared later this quarter.