[Posted: 9:30 AM EDT] All eyes are on the U.K. but financial markets are coping with the uncertainty rather well.  Here is what we are watching this morning: 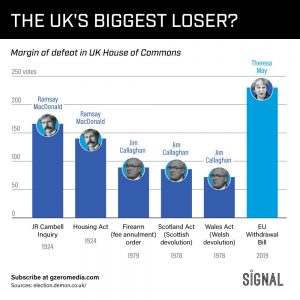 It is the largest defeat in the modern era, with her margin of defeat at 230 votes.[1]  Of the 317 Conservative MPs, 118 rejected the proposal.  In response, as expected, Labour leader Corbyn tabled[2] a no-confidence vote which will occur later today at 7:00 GMT (around 2:00 EST).  However, it is unlikely that Corbyn’s motion will pass as the Tories who defected on the Brexit vote will likely not want to see early elections and a potential Labour victory.  If Corbyn’s motion passes, by some chance, then Parliament would have 14 days to appoint a new PM.  Given that May has already survived a Conservative leadership challenge, there isn’t really an obvious alternative from her party to replace her.  New elections would likely devolve into a de facto referendum on Brexit.

Now that it is clear May’s plan is dead, what is the plan going forward?  Well, there really isn’t one.  Here is what we know for sure:

Assuming May survives the no-confidence measure, she will have three days[8] to offer an alternative plan.  It is unlikely she can provide an alternative measure.  She may simply decide to resign, although that seems unlikely.  She might propose her own referendum.  But, the most likely response would be to try to extend the deadline, which we suspect the EU would approve.

So, how did we get into this mess?  The original vote on Brexit was a reflection of populist uprisings seen across the West.  Much of the anger toward the EU was driven by rapid changes in society caused, in part, by high levels of immigration.  The EU’s open borders were a factor in rising immigration.  Brexit became symbolic, much like the border wall debate in this country.  However, the Brexit supporters offered a vision of the future that was never going to happen.  They sold a story that the U.K. could leave the EU but retain all the trading benefits of the EU free market, not pay dues, control the border and be free to make new trade deals.  The reality is clearly less attractive.  The EU is going to put up trade barriers as it does against any non-member and the U.K. needs to start the painful process of negotiating a trade deal with the EU that will likely take years to complete.  And, a U.K. outside the EU is really a small island nation that will lose much of its financial services industry to Frankfurt or, more likely, New York, and it will simply not be high on anyone’s agenda for trade negotiations.

The next referendum, which is a growing possibility, would need to reflect the reality of what Brexit really means, and not one based on an impossible fantasy.  Figuring out how to phrase that will be really hard.  In the end, the U.K. might simply decide it is better off inside the EU and negotiate hard for some degree of border protection.

So far, financial markets are taking all this political chaos rather well.  Some commentators have remarked that the GBP is not paying attention at all.[9]  This stance is questionable; based on parity, the GBP should be around $1.63, so there is some degree of “Brexit penalty” in the current exchange rate.  However, a hard Brexit likely takes the pound to a range of $1.10 to $1.20.  The financial markets are expecting a delay.  The risk to the financial markets is a condition similar to the cascade of events that led to WWI; no one wanted the war that followed but their decisions led to war as the outcome.  Although support for a hard Brexit is low, the likelihood grows because both sides are using the potential for a really bad outcome to sway opinion.  If neither side blinks, we have the classic bad outcome from the game of chicken; neither side defects so both suffer greatly from the result.

China: China has announced a massive monetary injection of $84 bn into the banking system.[10]  Although some of this money is to support the economy, much of it is to build cash levels in the system before the Chinese New Year, which falls on February 4 this year.

A hawk turns dovish: Perhaps one of the most interesting (and shocking[11]) developments from the FOMC is that KC FRB President Esther George is now supporting a pause.[12]  She is arguably the most hawkish member of the FOMC.  With her shift, we suspect the FOMC will be on hold for a significant period.

Shutdown issues: The president has ordered tens of thousands of government workers to return to their jobs without pay to ensure the government continues to function.[13]  This announcement is occurring as the chair of Economic Advisors warns that GDP is falling 0.13 percentage points per week during the partial government closure.[14]  So far, financial markets have mostly ignored the shutdown, but if the effects on the economy increase we may start to see equities weaken until progress toward a resolution is seen.

Iran oil: We noted yesterday that the State Department indicated the Trump administration was not planning to issue further oil export waivers.[15]  Even with the waivers in place, Iranian oil exports have been under pressure as December export data show oil exports only at 1.1 mbpd, down from 2.5 mbpd last spring.[16]

[9] https://www.axios.com/british-pound-rises-brexit-deal-theresa-may-20db0b5d-c549-4a29-88d6-d2346b410374.html (Interestingly enough, because of the government shutdown, the Commitment of Traders report from the CFTC has been suspended so we don’t know the current positioning of the GBP on the futures exchanges.)