Markets are quiet this morning as earnings season begins.  Trade is the biggest headline, as the U.S. and China are expected to sign a deal tomorrow.  Here is what we are watching this morning:

Trade:  First, the U.S. and China are expected to sign a deal tomorrow.  The PRC will pledge $200 bn in new U.S. purchases; although the full details may not be released, it is generally expected that China promised to buy around $75 bn of manufactured goods, $50 bn of energy, $32 bn of agriculture and around $35 bn in services.  These numbers represent purchases over two years.  The U.S. won’t implement new tariffs that were signaled in September and has removed the currency manipulator label on China.  Casual observation would suggest the U.S. won this round handily.  It appears Beijing is sensitive to this idea; a well-connected blogger in China has taken great pains to suggest that we are early in the evolution of the trade relationship.  The deal should reduce the bilateral trade deficit the U.S. has with China; however, since trade is ultimately the difference between public and private sector net saving, the deficit in these accounts invariably will lead to trade deficits with other nations.  Austerity is the most effective way to reduce trade deficits; it is also the least popular.

Second, China’s trade data improved in December, with exports up 7.6% and imports up 16.3% from the prior year.  However, these eye-popping numbers are mostly due to base effects.  Last year, trade was hurt by the early stages of the trade conflict.  The overall balance was mostly flat. 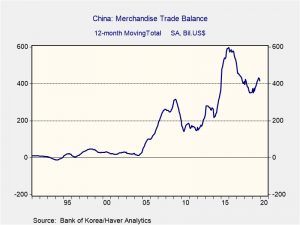 Third, as the U.S./China trade situation stabilizes, the administration is likely to shift its focus to the EU.  In anticipation, the new EU trade negotiator, Phil Hogan is coming to Washington this week to attempt to get ahead of any conflict.  He will have his work cut out for him.  The U.S. is at odds with France’s new digital tax and President Trump has targeted Europe’s car industry as a problem.

Iran:  Iranian leaders are trying to cope with protests and have announced arrests of those responsible for downing the Ukrainian airliner.  EU leaders have put Tehran on notice that it will reimpose international sanctions on Iran if it doesn’t return to compliance with the JCPOA.  Iran has been trying to create daylight between the U.S. and Europe, with the hope of cracking the sanctions bind that the Iranian economy faces.  However, those hopes appear dashed as Europe is demanding a return to the nuclear deal and Iran will still face U.S. sanctions, which have effectively cratered the Iranian economy.  We expect Iran to try and limp along and hope a new U.S. president in November might offer a way out of their current crisis.  However, if President Trump is re-elected, they may have no choice but to renegotiate the nuclear deal.

Canada-Iran-United States:  Responding to Iran’s airliner shootdown that killed dozens of Canadians last week, Canadian Prime Minister has laid the blame mostly on the Iranian government.  However, in an interview yesterday, he obliquely blamed the U.S. as well, noting that “those Canadians would be, right now, home with their families” if not for the escalation of tensions in the region.  There are some signs that other high-profile Canadians are also making that connection.  Only time will tell how much the incident might damage U.S.-Canadian relations, but in any case, it does show how the administration’s “America First” strategy has the potential to isolate the U.S. even from its strongest historical allies.

Germany:  A group of auto-industry executives has warned that Germany could lose as many as 400,000 jobs by 2030 if the country’s carmakers have to rely on imports to meet sales targets for electric vehicles.  Reflecting Germany’s loss of competitiveness in key technologies, the biggest danger is that Germany may not be competitive enough in manufacturing batteries for the cars.

United Kingdom:  Prime Minister Johnson has finally admitted that there is little chance Britain will be able to conclude a trade deal with the EU before it leaves the bloc at the end of 2020.  That matches what we’ve been saying all along.  It also serves as a reminder that Brexit-related uncertainty has not gone away, but will remain an issue for the markets for some time to come.

Ireland:  Confirming reports we noted yesterday, PM Varadkar has called a snap general election for February 8.  The call scuttles a 2016 parliamentary voting deal under which the opposition Fianna Fáil Party propped up Varadkar’s center-right government to ensure political stability during the Brexit negotiations.

China economic news:  A couple of Chinese economic anecdotes caught our eye.  First, it is no secret that China’s corporate sector is generating a rising level of defaults.  Anytime a loan is made, there is a certain chance that the borrower will default.  Additionally, given that China only outlawed defaults in 2014, and restricted the use of defaults until 2018, the potential for a significant level of dodgy loans from non-financial corporations in China is very high.  So, the real focus should be on workouts.  If there are lots of bad loans, some sort of resolution is required.  In other words, who gets “stuck” with the costs of resolution?   Here is one item that got our attention.  Dandong Port Group, a port operator on the border with North Korea, had its business adversely affected by sanctions on the Hermit Kingdom.  However, it does appear that aggressive overexpansion is mostly to blame for its debt problems.  In 2017, it defaulted on $150 mm in bonds.  It continued to default on other issues, eventually stopping payment on $1.2 bn in debt.  In April, the firm began formal bankruptcy proceedings.  The bankruptcy court has rendered its verdict.  The company will be divided into two firms, one controlled by the state and the other private.  The best assets will go to the state firm, which will be controlled by a state-run company.  The other firm will be controlled by the private creditors.  Bondholders will get CNY 300k maximum compensation (roughly, $44k) and shares in the new company.  Needless to say, private creditors are not happy.  What is of concern is that if this settlement becomes the norm in China, it will become very difficult for non-state firms to borrow money and given the level of corporate debt in China, rollovers will likely be necessary to avoid bankruptcies.  Of course, if the goal is to increase state control, the Dandong Port settlement might be a desirable model.  Second, Chinese automakers are laying off workers as car sales continue to slump.

An economic puzzle:  In theory, the world trade balance should be zero.  Short of trading with Mars or the Moon, a trade deficit in one part of the world is a trade surplus in another part, and taken as a whole, there should not be a global trade surplus or deficit.  In reality, due to reporting errors and other factors, the world does run a trade surplus with itself.  However, a recent paper uncovered that nearly 80% of that global surplus comes from the EU.  The paper makes the case that fraud related to the EU’s value added taxes (VAT) is the culprit.  Exports are treated differently in the EU VAT calculations, so it appears there is a systemic fraud going on were domestic sales are being treated as exports to evade taxes.  Public finance experts have suggested the U.S. could adopt a VAT to increase government revenues to improve confidence in public deficit financing.  However, this paper does highlight that such a move isn’t without risks.