Outside of the Chinese trade data (see below), there wasn’t a lot of news. The number from China came in a bit soft as exports fell 6.1% from last year in USD terms. For China, the weaker trade data does create a dilemma. On the one hand, the drag on growth from a narrower trade surplus could, at least in theory, be offset by fiscal spending, rising consumption or investment. The first and third options would not be preferred, whereas the middle option, rising consumption, could weigh on net exports even more because it usually follows from rising consumption as imports increase. The other option is to depreciate the CNY to improve competitiveness. The Chinese are actually trying to stabilize the currency as capital flight has been putting downward pressure on the CNY. We note that bank regulators in China are putting additional restrictions in place, forcing banks to keep their foreign ledgers balanced which will make it more difficult to move money out of the country. It appears that if a bank finds that outflows are larger than inflows, it can’t facilitate the movement out of China. The moves being made by China are looking increasingly desperate and we don’t think they will work over time.

Meanwhile, Fed officials are becoming increasingly hawkish. The general consensus is that the Fed will raise the fed funds target at least twice this year and maybe three times. Chair Yellen held a town hall yesterday. Although nothing of consequence seemed to emerge, she did sound quite optimistic about the economy. Today’s WSJ notes an unusual level of “harmony” among Fed officials about moving rates higher. Over the past two weeks, five of the 12 regional FRB presidents have suggested that we should see two to four hikes this year. The report contrasts information gleaned from the recently released Fed meeting transcripts from 2011 which show a high degree of dissention among the FOMC and the measures that Chair Bernanke was forced to take to contain dissention.

We note that both St. Louis FRB President Bullard and Philadelphia FRB President Harker are calling for shrinking the Fed’s balance sheet. Although Bullard continues to call for only one hike this year, consistent with his narrative that the Fed shouldn’t be in the business of projecting policy, the fact he is also suggesting a reduction in the balance sheet clearly signals a hawkish bias. Harker suggested that once the fed funds target reaches 1%, the Fed should begin reducing the balance sheet by ending the reinvestment process and, over time, actually start selling down the balance sheet. It is unclear how that would affect financial markets. Regular readers are familiar with this chart: 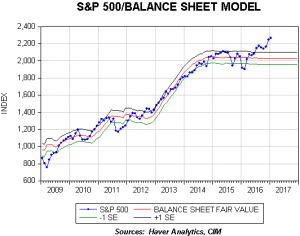 The chart shows a model for the S&P 500 based on the Fed’s balance sheet.  From 2009 into mid-2016 the S&P mostly tracked the asset side of the Fed’s balance sheet.  However, since last summer, equities have started outperforming model, suggesting that equities have shifted from focusing on monetary policy to other factors, mostly likely economic growth and fiscal policy.  In theory, shrinking the balance sheet is a form of policy tightening; if this occurs as the FOMC is raising the fed funds target, it could easily amplify the policy tightening effect.  This is a factor we will be monitoring in the coming months.