[Posted: 9:30 AM EDT] U.S. equity futures are modestly lower this morning in a very quiet market.  Yesterday, we started the day lower but moved higher.  Although much of the rally was probably due to Chair Powell’s “patient” speech, it also points to a different market tone.  Last month, rallies were sold.  Yesterday, we saw weakness bought.  That pattern bears monitoring.  Here is what we are watching this morning:

Fed talk: We are seeing consistent messaging from members of the FOMC.  Yesterday, Chicago FRB President Evans signaled that the Fed should remain on hold for a while,[1] even though he still indicates that he supports three more hikes.  Vice Chair Clarida reiterated the patient language and Bloomberg made Powell’s repeat of the word “patience” in his talk yesterday into a meme of sorts.  There is also persistent discussion about the balance sheet.[2]  As we noted in last week’s Asset Allocation Weekly, the primary impact of the balance sheet seems to be psychological.  In reality, banks mostly held QE as excess reserves.  But, psychology shouldn’t be ignored.  Making investors and consumers feel better can be positive for the economy.

One of the unknowns is what level of the Fed’s balance sheet would be “normal.”  If we compare the balance sheet to GDP, we are a long way from achieving that goal. 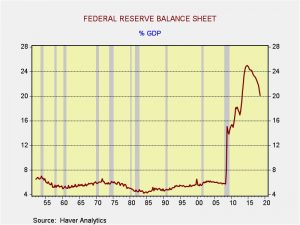 Before the financial crisis, the balance sheet represented about 5.5% of GDP.  It ballooned to nearly 25% of GDP in 2014 but has been falling rapidly since.  The end of QE and the rise of GDP has contributed to the decline and actual reduction is accelerating the process.

Although that same procedure could work again, the Fed does seem to want to return to “normal order,” where fed funds are mostly determined by reserve levels.  Currently, due to the level of excess reserves in the system, monetary policy is managed by the interest rate on reserves (IROR).  The Fed pays banks 2.28% on their reserves; without that rate, the Fed would not be able to conduct interest rate policy because there are so many reserves in the system that rates would remain at zero all the time.[3]  Although the rate paid on reserves ranges between the upper and lower bounds of the fed funds range (currently 2.25% to 2.50%), the rate is getting high enough that it may actually be tight. 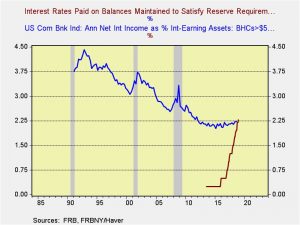 The blue line shows bank net income as a percentage of interest-earning assets (or, net interest margin) on bank holding companies with assets in excess of $500 bn.  The IROR rate is now in the neighborhood of the net interest margin (NIM) and begs the question—why should a bank risk lending when it can simply hold idle reserves and earn about the same net margin?  Now, it should be noted that smaller banks have higher margins[4]; banks with assets between $50 bn to $500 bn have NIM of 3.03% and banks with assets less than $50 bn have NIM of 3.81%.  Therefore, there still may be an incentive for them to lend instead of holding reserves.

The Fed should probably consider returning to the post-WWII plan, which is to simply hold the balance sheet steady and allow the natural growth of the economy to reduce its importance.   Over time, the reliance on IROR would likely become less important.

Brexit: There are rumors that the May government is going to ask the EU for an extension of the Article 50 deadline.[5]  The rumors have been denied but the report boosted the GBP overnight.

Trade talks: Chinese Vice Premier Liu is scheduled to visit the U.S. later this month,[6] as long as the current shutdown doesn’t make the trip moot.  Liu is a very important official in the Xi government and the visit signals that China is trying to bring a deal to fruition.  In related news, China may guide its GDP to around 6.0% compared to last year’s 6.5%.[7]

Shutdown issues: We are starting to hear that economists are downgrading their Q1 GDP forecasts due to the shutdown.  JP Morgan (JPM, 100.39) announced today it is lowering its growth projection to 2.0% from 2.5% due to the expected decline in government spending.  Of course, that likely means Q2 estimates will be revised higher if the shutdown ends at some point.  But, it also supports the Fed pause because Q1 economic data will be weaker than it would have been otherwise.  Adding to this problem has been a persistent seasonal adjustment issue with Q1 GDP data; we could see a rather dramatic drop in Q1 reports, which, assuming the government reopens, would be reported in Q2.  This adds to the case that if we are going to see any further rate increases they probably won’t happen until H2.

Iran oil exports: Reuters[8] is reporting that Iran is struggling to sell its crude oil despite waivers; according to reports, although eight nations were granted waivers, the U.S. did not make clear what level of sales would be permitted.  Thus, Iranian oil exports were around 0.9 mbpd in December and will likely remain at that level this month.  Prior to sanctions, Iran usually exported around 2.5 mbpd.

Syrian confusion:First, the president surprised his advisors and the Pentagon by ordering a rapid withdrawal of U.S. troops from Syria.  Second, National Security Director Bolton, supported by SOS Pompeo, confirmed the withdrawal but added conditions that essentially won’t be met for years (security for the Kurds, for example), which suggested the president’s staff had thwarted his plans.  However, reports today suggest the president has prevailed after all.  The Pentagon announced it is putting logistical plans in place to withdraw the troops as the president ordered.[9]  It is still unclear when exactly the troops will depart, but, as a military official noted, “We take our orders from the president, not John Bolton.”

[3] Of course, one other policy tool that could be employed would be to increase required reserve levels dramatically.  Although that would allow for normal open market operations, banks would cry foul.  In addition, in the aggregate, the system is flush with reserves but that doesn’t mean the distribution is equal.  Thus, this move could lead to a severe reserve shortage in some banks and make managing fed funds difficult as well.

[4] It sort of begs the question—why should a bank drive to get large when it simply reduces NIM?  It also suggests the benefit of scale in banking probably doesn’t exist; in fact, there may be decreasing returns to scale.