[Posted: 9:30 AM EDT] U.S. equity futures are lower this morning as the markets take a “pause to refresh.”  Here is what we are watching this morning:

Oh, that’s what you meant: The FOMC minutes were released yesterday and signaled a decidedly dovish turn in policy.[1]  The text of the minutes spent some time discussing how swapping the word “expects” for “judges” was designed to show that the FOMC is much more data-dependent than path-dependent.  In addition, there was some discussion of how the current policy rate is close to neutral.  What is striking about the minutes is that they were clearly more dovish than the statement and the press conference.  Now, it should be noted that the minutes are the distilled summary of actual meeting comments; in 2023, we will get the actual transcripts that will show what the members really said.  What very likely occurred is that the Fed took note of market reaction and opted to write very dovish minutes to clearly signal that it is pausing and may be near the end of its rate hike cycle.  The fact that the statement and the press conference failed to deliver that message either means there was a communication breakdown or they really didn’t mean to pass such a dovish message across and underestimated how badly financial markets needed to hear that.  In any case, the supportive signal has now been sent.  And, in the post-meeting, committee members are clearly signaling pause.[2]

Brexit: PM May took another blow yesterday as a Labour measure passed with support of the opposition and some renegade Tories that would force a “plan B” to be formulated by the government in three days if the current bill fails (which it almost certainly will[3]).  The follow-up bill can be amended by MPs, which means it will become a “dog’s breakfast” of amendments that will likely have no chance of acceptance by the EU.[4]  Meanwhile, Labour’s Corbyn[5] is pressing for new elections if May can’t get her Brexit measures through Parliament.  It’s not clear that May would lose a no-confidence vote; although she has little support, Tories know that bringing down her government will almost certainly lead to election losses and the Conservatives’ removal from power.  It’s difficult to see how this process avoids a mess.

The Establishment strikes back: The White House is working on bills that would expand the president’s trade authority, giving him even more power to apply tariffs.  Sen. Grassley (R-IA) has responded by saying, “We ain’t going to give him any greater authority. We already gave him too much.”[6]  We also note that the president of the Chamber of Commerce is going to deliver his annual “State of American Business” in which he defends the U.S. role in fostering globalization.[7]  The interests of the establishment and the White House are diverging; we continue to watch for signs that this widening division begins to affect legislatures.  So far, the impact has been modest. 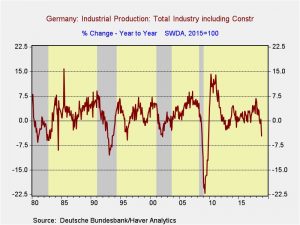 China’s inflation data showed a sharp decline, with PPI sliding to a two-year low of 0.9% from 2.7% in November.  CPI dipped to 1.9% from 2.2%.  The PBOC has an inflation target of 3% for CPI; this data suggests the central bank could act to reduce rates further.  Global economic weakness will tend to widen the U.S. trade deficit regardless of tariff actions and hold down inflation.  Although the Federal Reserve generally doesn’t make comments about global growth in policy statements, we suspect the state of the world is having an effect on FOMC policymakers.

In the details, estimated U.S. production was unchanged at 11.7 mbpd.  Crude oil imports rose 0.4 mbpd, while exports fell 0.2%.  Refinery runs declined 1.1% and should continue to fall in Q1.

Based on oil inventories alone, fair value for crude oil is $60.32.  Based on the EUR, fair value is $54.85.  Using both independent variables, a more complete way of looking at the data, fair value is $56.05.  By all these measures, current oil prices are generally in the neighborhood of fair value.  However, we still expect prices to move toward $60 in the coming weeks.