[Posted: 9:30 AM EST] China reported its producer prices (see below).  China’s PPI has been rising, suggesting growing inflation pressures in the country. 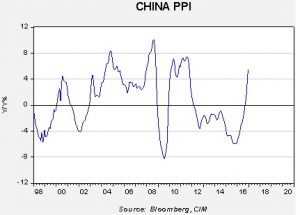 Over the past year, producer prices have been rising rapidly in China after more than two years of producer price deflation.  The combination of monetary stimulus, a weaker currency and a policy to reduce excess capacity does seem to be working to raise price levels.

The rise in China’s producer prices will export inflation to the rest of the world, although the weaker CNY will offset some of that price pressure.  Still, there is evidence to suggest that rising price pressures in China could find their way to the U.S. 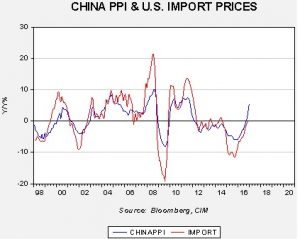 This chart shows the relationship between China’s PPI and U.S. import prices on a yearly change basis.  The two series are closely correlated, with r=89.0%.  Since 1998, import prices have averaged +1.3% per year.  Of course, import prices are also quite sensitive to the dollar.  Using the JPM dollar index, when the dollar index is above 110, the average growth is only 0.3%; when the index is less than 110, the average rises to 2.3%.  The current JPM dollar index is 118.6, suggesting that the dollar will tend to inoculate the U.S. from most of the impact of rising Chinese inflation.  However, the rest of the world won’t be able to as easily rely on this protection; thus, rising Chinese PPI will likely lead to rising global prices.  This factor could push emerging economies into a difficult position.  Rising prices should lead to tighter monetary policy in the emerging world but the stronger dollar will tend to raise financial stress in the emerging world, which would call for easier policy.  China’s PPI could become an issue for the rest of the world.