Good morning! Today’s report begins with a discussion about the Federal Reserve meeting on Wednesday. Next, we discuss U.S. economics and policy news with an update on the Ukraine situation. We then turn to China-related stories. International news follows, and we end with our pandemic coverage.

The Federal Reserve signaled that it expects to begin raising rates soon and start shrinking its balance sheets soon after.  During a press conference, Chair Jerome Powell stated he believes the labor market and the economy are strong enough to withstand a series of rate hikes. When pressed about whether there could be a rate hike after every meeting, Powell did not rule out the possibility. Based on his comments, interest rates on the two-year deferred Eurodollar futures contracts rose to 2.00%, signaling the possibility of the Fed raising rates four times this year and next. The hawkish tone by the Fed led to a sell-off in equities and Treasuries. 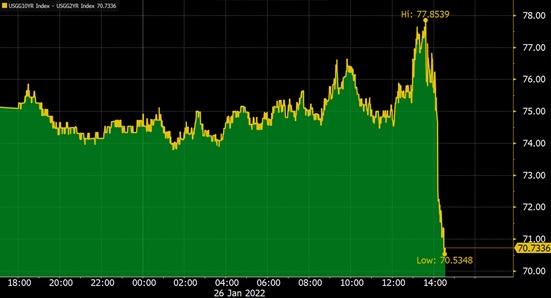 The chart above shows the spread between the 10-year and 2-year Treasuries. Following Powell’s press conference, the spread narrowed 8 bps to its flattest level since 2020. The yield curve flattening likely signals growing pessimism about GDP growth expectations as the Fed attempts to contain inflation.

COVID-19 cases in Germany surpassed 200,000 for the first time. The rise in cases has led to staff shortages.