Our Comment today opens with some positive economic news out of Europe where the January flash composite PMI unexpectedly swung above the level of 50, indicating a return to growth.  We next review a wide range of other international and U.S. developments with the potential to affect the financial markets today, including a report that Japan and the Netherlands will join in the U.S. clampdown on sending advanced semiconductor technology to China, and new indications of a broader softening in the U.S. labor market.

Eurozone:  S&P Global said its flash composite Purchasing Managers Index for the Eurozone rose to a seasonally adjusted 50.2, beating the expected reading of 49.8 and the final December reading of 49.3.  The index has now risen for three consecutive months after it reached its most recent low in October. 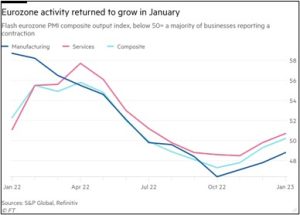 Russia-Ukraine War:  As we flagged in our Comment yesterday, the Polish government has formally requested permission from Berlin to send its German-made Leopard 2 tanks to Ukraine.  The move raises the pressure on Germany to finally relent and give its required permission.  However, it’s too early to know if Chancellor Scholz will acquiesce, especially since the Russian government has now warned him that granting such permission would sour future German-Russian relations.

NATO Expansion:  In a new setback for Sweden and Finland as they work to join NATO, a far-right politician burned a copy of the Quran and denounced Muslims outside the Turkish Embassy in Stockholm over the weekend.  The incident prompted Turkish President Erdoğan to again threaten to veto the Swedish and Finnish applications to join the military alliance.  There is some speculation that Erdoğan is simply playing the strong nationalist card ahead of Turkey’s May elections.  Even if that’s true, however, it would suggest Sweden and Finland can’t move forward in their applications to join NATO for at least several more months.

France:  In its new six-year defense plan, the French government plans to spend some €400 billion (approximately $433.4 billion) to transform its military into a more responsive force that can quickly respond to contingencies around the globe, particularly around French territories in the Indo-Pacific region.

Brazil:  President Lula da Silva has replaced the country’s top army commander, Gen. Julio Cesar de Arruda, because of what Defense Minister Mucio called a “fracturing of trust” after the riots at Brazil’s capital on January 8 which aimed to prevent Lula from taking power despite his win in the October elections.  Since those riots, Lula has accused many officials in the Brazilian military and security forces of conspiring to let the violence proceed unimpeded.

Japan:  Yesterday, the Bank of Japan held its first bond auction under an expanded bank lending program designed to ease pressure on its yield-curve control policy.  The successful auction and the broader program are expected to boost bank liquidity and improve the demand for Japanese government bonds, helping keep 10-Year JGB yields at the BOJ ceiling of 0.50%.  However, it is not yet certain how long the BOJ will be able to maintain its yield-curve control in the future.

U.S. Labor Market:  On top of the layoffs in the information technology and real estate industries that we’ve been flagging, new reports today hint that labor demand may be starting to wane more broadly.  First, industrial conglomerate 3M (MMM, $122.62) said that it is cutting some 2,500 manufacturing positions globally due to a softening in demand for its products that took hold late last year.  Separately, economists have begun to note a consistent fall in temporary employment over the same period.  Falling temp jobs often signal a broader decline in the labor market.

U.S. Energy Industry:  After years of paltry investment in new oil and gas drilling, offshore drilling in the Gulf of Mexico and elsewhere around the world is quietly growing again.  According to data provider Westwood Global Energy Group, about 90% of the 600 leasable offshore drilling rigs available worldwide were working or under contract to do so in December, versus just 63% five years ago.  The increase in drilling suggests today’s high energy prices and growing energy demand have begun to produce a supply response, despite the prior hurdles like investor demand for capital discipline and social and regulatory preferences for green energy.

U.S. Cryptocurrency Industry:  New reporting indicates that tougher scrutiny by the Securities and Exchange Commission has hindered a number of cryptocurrency companies from going public over the last year.  As we had warned would happen, the regulatory crackdown appears to stem from the wave of bankruptcies and financial problems in the industry.