In today’s Comment, we open with the building of geopolitical tensions along the Russia-Ukraine border and in the waters off the coast of China.  We next review various political and economic developments around the world, including a brief comment regarding this week’s Federal Reserve meeting on U.S. monetary policy.  We wrap up with the latest news on the coronavirus pandemic.

Russia-Ukraine:  As Russia continues its menacing military buildup along the northern, eastern, and southern borders of Ukraine, the State Department instructed the families of U.S. diplomats in Ukraine to leave the country and authorized some embassy staff members to leave as well.  The department also recommended that all U.S. citizens in Ukraine consider leaving now on the grounds that the U.S. Embassy won’t be in a position to help Americans depart if a Russian attack is underway. 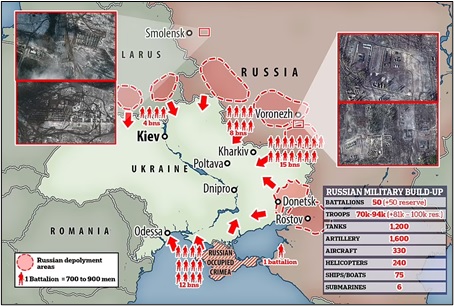 China-Taiwan-Japan:  Although the Russia-Ukraine crisis has garnered the most attention recently, it’s important to remember that military tensions also continue to rise in the waters between China, Taiwan, and Japan.  For at least the last six months, the Chinese navy has maintained the continual presence of at least one warship in the waters south and east of the southernmost Japanese islands.  That marks China’s first consistent deployment of naval forces beyond the “first island chain” and demonstrates the military and economic threat it poses to Japan, especially if it were ever able to control Taiwan. 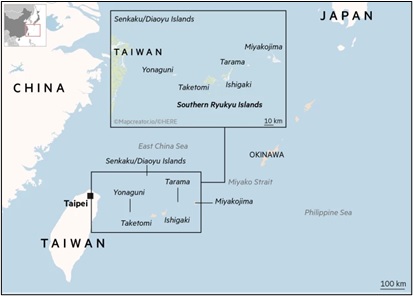 China:  In a sign that President Xi continues to clamp down on powerful private businesses and what he sees as threats to China’s moral fabric, the government has launched an investigation into “disciplinary violations” by vaping tycoon Chu Lam You.  In Hong Kong, news of the investigation sent her company, Huabao International Holdings (336 HK, HKD, 4.86), tumbling by over 65%.

Italy:  Parliament members and other senior politicians today begin the process of voting for the country’s new president, with all eyes on whether they will keep Italy’s most celebrated technocrat, former ECB chief Mario Draghi, as prime minister, allowing him to forge ahead with an ambitious EU-funded reform program, or elevate him to head of state, potentially triggering a paralyzing crisis over a successor to head the government.

Yemen-United Arab Emirates:  The UAE intercepted two missiles launched by the Iran-allied Houthi rebels in Yemen, one week after a strike by the group killed three people in Abu Dhabi.  The attack highlighted the growing threat from the Houthis, who have targeted neighboring Saudi Arabia with missile and drone strikes for years.

U.S. Monetary Policy:  Fed officials begin their next two-day policy meeting tomorrow, after which Chair Powell is expected to confirm that the central bank’s asset purchase program will end by March and set the stage for a new round of interest-rate hikes.  As if that isn’t unsettling enough for the financial markets, some policymakers’ statements have recently sounded almost panicky about inflation, creating uncertainty about how fast or how far they will hike rates.