In today’s Comment, we open with a few remarks on the downdraft this morning in most global financial markets.  We next provide an update on Russia’s military buildup along its Ukraine border.  We then cover a range of other international news developments.  We wrap up with the latest news on the coronavirus pandemic.

Global Financial Markets:  As U.S. investors return to the markets after yesterday’s holiday, expectations for Fed rate hikes have worsened, apparently in response to stray comments by financial executives last week that the monetary policymakers might hike their benchmark fed funds rate a half dozen or more times this year.  Adding to the interest-rate concerns, the Bank of Japan today lifted its inflation projections for the first time since 2014, conjuring up images of a potential rate hike by the BOJ.  Futures markets today suggest investors expect “only” four Fed rate hikes by December (see CME chart below), but that is still uncomfortable enough to drive down bond and stock values. 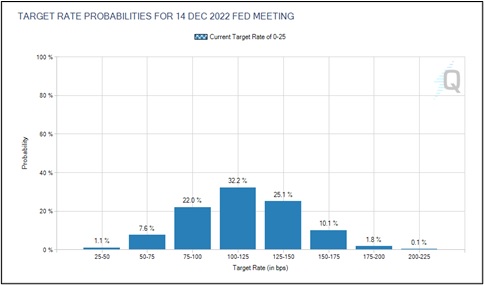 Russia-Ukraine:  At least as of this writing, President Putin still hasn’t launched an attack on Ukraine, even though 100,000 or so Russian troops and enough military equipment for many more than that remain poised along Ukraine’s northern, eastern, and southern borders.  U.S. officials also say Russia has secretly deployed saboteurs to Ukraine so they could be ready to launch a “false flag” attack on Russian interests there, in case the Kremlin needs justification for an attack.  Russia has also been evacuating its diplomats from its embassy in Kyiv, in another potential sign of impending conflict. 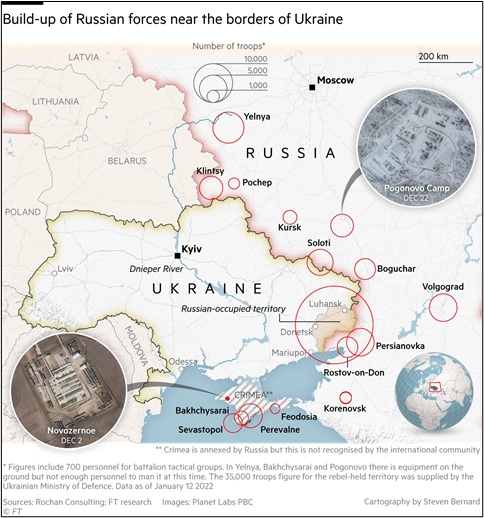 China:  Amid signs of significant economic slowing ahead of the Communist Party’s 20th National Congress later this year, the People’s Bank of China cut two of its key interest rates over the weekend.  The modest rate cuts suggest the government is increasingly anxious to keep up economic growth ahead of the Congress, where President Xi will seek approval for a third term in office.  Indeed, PBOC Vice-Chair Liu today promised that the central bank would introduce further moves to stabilize the economy and prevent a “collapse” of credit.

United States-China:  The FBI and a U.S. investment-screening panel are investigating a Chinese government-backed investment company’s purchase of a 47% stake in a California manufacturer of small recreational, amphibious planes.

United Kingdom:  Prime Minister Johnson continues to face mounting pressure to resign because of last week’s news that he attended a “bring your own booze” party in the garden of Downing Street against his government’s social-distancing rules early in the pandemic.

Yemen-United Arab Emirates:  Yemen’s Houthi rebels said they were behind yesterday’s drone and missile attacks on the United Arab Emirates, which killed three people.  The Houthis, who are backed by Iran, said they had targeted Abu Dhabi in retaliation for the UAE’s recent escalation of its support for the Yemeni government in a Saudi-led coalition.  The attack has sparked fears of wider violence in the region, adding to today’s jump in energy prices.

Emerging Market Debt:  The World Bank issued a report saying a group of 74 less-developed countries will have to pay some $35 billion to official bilateral and private lenders in 2022, up about 45% from their required payments in 2020 (the last year for which figures are available).