Our Comment today opens with a slew of reports related to China and its recent shift toward supporting domestic economic growth and easing tensions with the West.  We next review a wide range of other international and U.S. developments with the potential to affect the financial markets today, including similarly important shifts in the economic policies of Japan and Europe.

Chinese Real Estate Industry:  In the latest sign that Beijing has reversed its previous clamp down on the residential real estate industry, the government has reportedly drafted a 21-point action plan to aid embattled developers with 450 billion CPY ($67 billion) in financing.  The plan would also include “reasonable debt extensions” for “high-quality developers.”  The government hasn’t indicated which firms are eligible, but it appears the support will focus on large, nationally active, systemically important firms.

Chinese Information Technology Industry:  Despite the step-back from tough restrictions on the real estate industry and acerbic diplomacy against the West, other reporting indicates that the government has expanded its longstanding practice of taking 1% equity positions in key private firms as a way to exercise ongoing influence over them.  These “special management shares” or “golden shares” typically come with a seat on the private firm’s board of directors and the right to control certain company decisions.  This allows the government to wield power over it outside the regulatory regime.

U.S.-China Geopolitical Competition:  Swedish state-owned mining company LKAB announced that it has discovered a deposit of more than 1 million tons of rare earth oxides in the country’s far north.  If confirmed, it would be the largest such deposit in Europe. 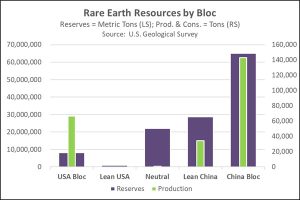 Global Automobile Market:  Data providers LMC Automotive and EV-Volumes.com reported that global sales of fully electric vehicles surged to 7.8 million units last year, giving them at least a 10% market share for the first time.  Fully electric vehicles made up 19% of all car sales in China, 11% in Europe, and less than 6% in the U.S.  The rapid growth in the market underlies the rising demand for lithium, cobalt, and other exotic minerals that are especially important in the batteries of electric vehicles.

Japan:  The Bank of Japan has begun its latest policy meeting, prompting concern that it could decide on a further loosening of its yield-curve control policy, as it did in December when it decided to let the yield on 10-year Japanese government bonds rise to 0.50%.  So far this morning, 10-year JGB yields have moved slightly above that limit, pushing the JPY higher.

European Union:  In another sign that the EU is taking up the mantle of industrial policy and the subsidization of its key industries, Competition Chief Vestager has sent a letter to EU finance ministers asking them to consider a new “temporary crisis and transition framework,” which would simplify state aid rules for green projects and renewable energy technologies.  The new framework would be designed to compete with the $369 billion in new U.S. subsidies for green energy technology included in the Biden administration’s recent Inflation Reduction Act.  European Council President Charles Michel has echoed the call for new EU industry support.

United Kingdom:  The British train conductors’ union has voted to hold two more days of strikes early next month, prolonging the long wave of work stoppages among transportation and public services workers.  Besides being disruptive to the economy, the wave of strikes continues to weaken the political position of Prime Minister Sunak and his Conservative Party.

World Economic Forum in Davos:  The WEF is kicking off its winter conference today in Davos, Switzerland.  After two years in which the in-person forum was canceled because of COVID-19, the event will be attended by hundreds of top political and business leaders from around the world.  The forum typically produces a lot of interesting political, economic, and business news and commentary.

Russia-Ukraine War:  Late last week, the Russian government stated that President Putin has named Gen. Valery Gerasimov as commander of the Russian forces in Ukraine, demoting the previous commander, Gen. Sergei Surovikin to the position of deputy commander.  Since Gerasimov was probably heavily involved in overseeing the invasion, the decision is likely to have little appreciable effect on the war.  In large part, naming Gerasimov as commander is likely meant to signal that the Kremlin has the war well in hand, despite financier Yevgeny Prigozhin’s effort to claim credit for the recent capture of Soledar, via his Wagner Group mercenaries.  Prigozhin continues to disparage the Ministry of Defense and, by implication, Putin himself, likely in an effort to build political support for a potential future challenge to Putin.

Peru:  Protests against President Dina Boluarte and the ouster of former President Castillo continue to spread around the country.  Indeed, the protests are intensifying and becoming more violent, prompting the government to declare a state of emergency in the capital Lima and several other regions.

U.S. Fiscal Policy:  On Sunday, newly elected Speaker of the House McCarthy said he would negotiate with President Biden over raising the federal debt ceiling of roughly $31 trillion, which the government is expected to hit this week, but he insisted that the talks include spending cuts.  With Democrats insisting that federal programs continue to be funded at least at current levels, the statement illustrates the risk of an impasse, potentially leading to a partial government shutdown or even a debt default, as the government runs out of work-around measures later this year.

U.S. Winter Storms:  California was hit by yet another big round of rain and snow storms on Monday, and a smaller set of storms in the middle of this week is now expected to mark the end of a period of intense precipitation.  Although the storms have caused widespread death and destruction, they have also helped alleviate the state’s recent intense drought.  That could potentially be a boon for California’s important agriculture sector, help bring down produce prices, and modestly reduce inflation pressures.