Good morning! Today’s Comment begins with our thoughts on the latest Consumer Price Index report and its implications for Fed policy. Next, we discuss the impact that China’s reopening is having on markets. The report concludes with our thoughts on Germany’s response to the U.S. climate-change subsidy initiative.

Inflation Nation: The CPI report will bolster expectations that the Fed will moderate monetary policy this year.

China’s Back: There is much anticipation regarding the reopening of the Chinese economy, but the lack of COVID data may be a problem for markets. 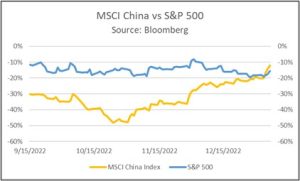 Berlin Shrugs: Germany may be more open to allowing the U.S. to implement its climate-change subsidies than its comments suggest.