In today’s Comment, we open with a major new U.S. regulatory initiative and further indications the U.S. and its NATO allies are trying to scare off Russia from any invasion of Ukraine.  We next turn to a range of other international developments that have the potential to affect the financial markets today.  We wrap up with the latest news on the coronavirus pandemic.

U.S. Regulatory Policy:  President Biden today is launching a crackdown on the country’s largest meat producers, including a push for tighter “Made in America” labeling rules that could fuel tensions with U.S. trading partners.

United States-Russia-Ukraine:  In a phone call yesterday, President Biden assured Ukrainian President Zelensky that the U.S. and NATO would “respond decisively” if Russia invades Ukraine as feared.  Tensions over the possible invasion remain high, despite a pre-Christmas agreement for a series of de-escalation talks beginning January 10 between Russia and the U.S., NATO, and the Organization for Security and Cooperation in Europe.  Separately, in a year-end address, Zelensky struck a defiant tone toward Moscow, saying, “No army on the other side of the border frightens us . . . because a great army on our side of the border protects us.”

European Green Policies:  The European Commission has recommended that nuclear energy and natural gas be considered “green” for investment purposes.  The controversial Commission push is part of the so-called “taxonomy” list, which will be crucial to channeling billions of euros in investments toward technologies needed to build clean power plants and decarbonize the bloc’s economy.  Some EU governments, including Germany’s, have already criticized the move, but reports indicate they will not be able to block it.  The move should therefore be positive for nuclear and gas producers in the EU.

China:  The Hong Kong stock exchange today suspended trading in defaulted real estate developer Evergrande (3333 HK, HKD, 1.59) following reports that the government instructed the firm to demolish 39 buildings in the southern province of Hainan because its planning permit was obtained illegally and had been revoked.

Turkey:  As President Erdogan continues pressuring the central bank to cut interest rates and the currency plunges, the country’s December consumer price index was up a whopping 36.1% from the same month one year earlier.  That marks Turkey’s highest inflation rate since Erdogan came to power almost two decades ago.  Nevertheless, Erdogan shows no sign of any major reversal of his low-interest-rate policy.  The lira looks set to remain weak, and economic instability remains a serious risk in Turkey.  The chart below shows how Turkey’s annual inflation rate has fluctuated since 2000. 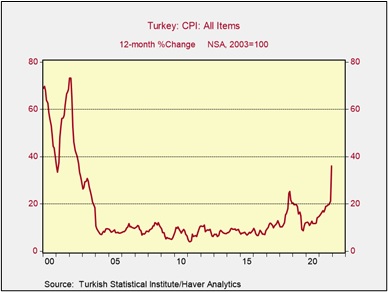 International Trade:  On Saturday, the Asia-Pacific region’s new free-trade grouping, known as the Regional Comprehensive Economic Partnership (RCEP), officially began operating.  The RECP will eventually eliminate more than 90% of tariffs on commerce among its 15 member countries in what economists say will be a boon to trade in the region.  It could also give China a more prominent role in setting trade rules in the region at the expense of the U.S., which has declined to join.