BOE monetary tightening: Today, the Bank of England voted unanimously to leave interest rates unchanged but warned that earlier and larger interest rates increases are on the horizon in order to dampen the effects of a faster growing global economy on U.K. inflation.  In the BOE’s quarterly inflation report, each of the members of the BOE Monetary Policy Committee agreed that they are unwilling to tolerate inflation exceeding the 2% target for the next three years.  At a press conference, BOE Governor Mark Carney stressed that tighter monetary policy is needed due to expectations of faster demand growth and diminishing supply.  There has been speculation that the next rate increase could come as early as May.  The pound rallied following the news. 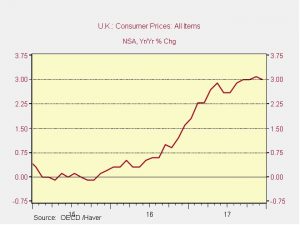 The chart above shows the year-over-year change in CPI for the U.K.  Following the Brexit vote in June 2016, the BOE stated that it would tolerate higher inflation to support domestic growth; as a result, the BOE has been slow to respond to rising inflation even though CPI has persistently remained above the 2% target since January of last year.  The Monetary Policy Committee’s decision to reverse course was largely due to concerns of possible overheating as previous concerns of rising instability following the Brexit decision proved to be unsubstantiated.

Is Goodfriend out?  Bloomberg[1] is reporting that Marvin Goodfriend, the White House’s nominee for one of the vacant Fed governor positions, may not get confirmed by the Senate.  The vote is expected today and he is expected to make it through the Banking Committee but the full Senate may be a problem.  Goodfriend has a controversial record.  He warned against an inflation problem after QE; although he was part of a broader chorus, the call was simply wrong.  He has not backed down from that position and was criticized for it.  He has also made disparaging comments about the dual mandate (a reasonable position from a theoretical standpoint, but Congress mostly likes the dual mandate as it acts as something of a brake on overly tight monetary policy), has shown support for negative interest rates and called for a magnetic strip to be added to paper currency, perhaps to give it a “stale date” in order to prevent currency hoarding under periods of negative nominal interest rates.  That sort of thing is vehemently opposed by Libertarians.  The left-wing populist group “Fed Up” is urging Democrats to reject the candidate.  Rejecting a Fed nominee would be a blow to the administration; it isn’t obvious who they would tap as a replacement.

A budget deal: The Senate leadership has agreed to a two-year funding deal, as we touched on yesterday.  The agreement lifts the sequestration caps and will increase discretionary spending by $300 bn over two years.  Defense spending will rise by about $131 bn and be matched with non-defense spending.  The agreement was not met with open arms by deficit hawks but, given that they are a minority in both houses, we expect this deal to pass.  It’s important to remember that Jacksonians, of which the president is one, are not opposed to government spending.  In fact, they like it, but only on their priorities.  In other words, foreigners and the undeserving should not get help from the government.  It is rare to see the deficit widen during expansions but the CBO is projecting just that outcome after this year and it hasn’t taken into account this new budget agreement in the below chart. 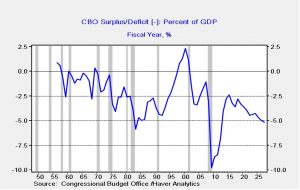 What does the deficit cause?  Although the textbook answer to this question is inflation, in fact, the impact is very complicated.  Our expectation is that budget deficits will most likely bring higher trade deficits and a weaker dollar, but probably have a modest impact on inflation.

As the seasonal chart below shows, inventories are usually rising this time of year.  We are seeing increasing inventories but they are running below the usual seasonal levels.

The rise in stocks is normal but the surprise this week was that the increase occurred with a sharp rise in refining activity.  If this jump indicates that maintenance is over, oil demand will rise.

Based on inventories alone, oil prices are undervalued with the fair value price of $67.44.  Meanwhile, the EUR/WTI model generates a fair value of $76.56.  Together (which is a more sound methodology), fair value is $73.79, meaning that current prices are below fair value.  We did see oil prices sell off yesterday despite the lower than expected rise in inventories.  That’s because weekly lower 48 production jumped 0.3 mbpd to 9.727 mbpd; coupled with Alaskan output, U.S. output hit 10.3 mbpd.  The market fears that rising U.S. output will cap prices.  Perhaps the largest risk is that Russia and Saudi Arabia decide to stop ceding market share to the U.S.; although we do expect that to occur at some point, it probably won’t happen until the Saudi Aramco IPO price sometime later this year or early next year.

As noted above, refining activity rose.

Although refiners had been cutting output since late last year, we usually see about two months of reduced activity before production returns.  One week doesn’t make a trend, but this reversal is rather shocking and does suggest that refiners see demand for their product (perhaps exports?).  While the rise in U.S. production is a concern, we would need to see a surge in inventories to become worried about prices.