[Posted: 9:30 AM EST] Although U.S. equity markets have been generally moving sideways for the past couple of weeks, there have been some interesting developments.  Here are a few items of note:

Greece should leave the Eurozone: In its latest report on Greece, the IMF displayed this sobering chart: 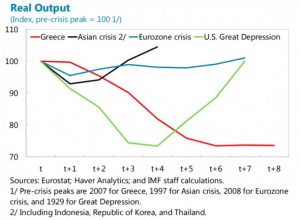 Since the 2008 Financial Crisis, Greece’s GDP level is now about 25% below where it was at the onset of the downturn.  The Eurozone has recovered.  Although the Asian Economic Crisis in the late 1990s was just about as bad in its first year, these nations rapidly recovered.  The U.S. did worse during the Great Depression but a sharp recovery developed after year four and had nearly fully recovered by year seven.[1]  Greece, as the chart shows, has declined and subsequently flatlined.  In the case of the U.S. and Asia, reflation was the key factor behind their recoveries.  Both Asia and the U.S. had fixed exchange rates in the 1990s and 1930s, respectively; the former was due to dollar pegs and the latter was due to the gold standard.  The IMF forced Asian nations to either devalue or float their currencies which led to sharp depreciation that supported recovery.  President Roosevelt’s decision to devalue the dollar compared to gold led to a recovery in the U.S.  Greece cannot use currency depreciation to reflate because of its membership in the Eurozone.  So, barring a German-led reflation in the Eurozone, Greece cannot reflate within the Eurozone.  Greece leaving the Eurozone, by itself, isn’t a big deal for the single currency or the EU.  It’s a small economy and its troubles are well known.  The risk is that Greece leaves and thrives, leading bigger nations, such as Italy and Spain, to consider Itexit and Spexit.  That would create all sorts of turmoil in the EU and the Eurozone.  Greek leaders, seeing this IMF chart, have to at least consider their options about staying in the Eurozone.

The Establishment Strikes Back, Part I: Jim Baker is a senior member of the GOP establishment.  He has held numerous jobs in the Reagan and the G.H.W. Bush administrations, including Secretary of State, Secretary of Treasury and Chief of Staff.  He has been joined by Hank Paulson, also a former Treasury Secretary, and George Shultz, a former Secretary of State and Treasury Secretary, to suggest “a conservative climate change solution” in the form of a carbon tax.  The populist right doesn’t believe there is a human cause to climate change and although this group faces broad derision for its stance, it is quite possible that there are other important factors outside human activity that affect the climate.  Solar activity is a well-documented factor that has an impact on earth climate, for example.  Still, Baker and his cohorts make a solid case.  If humans could be having an impact it makes sense to take steps to limit carbon emissions as a cautionary form of insurance.  And, if we are going to limit carbon, it should be done in the most economically effective manner, which is a carbon tax.  This is a much better plan than the current myriad of market-distorting regulations that are currently in place.  Baker goes even further with his plan.  He also suggests that the proceeds of the tax be distributed back to households as a form of “carbon dividend.”  Although this is something of an economic cul-de-sac, it is important politically; one of the reasons right-wing populists oppose the global warming argument is that they fear the elites will determine that global warming is real and middle class households should pay in the form of higher energy costs so the elites can go to Davos.  The carbon dividend would undermine that argument and, at the same time, change prices enough to affect behavior.  The third leg of their program is also critical; Baker proposes a carbon border adjustment.  Exports from the U.S. to nations without a carbon tax would receive a rebate and imports would have their carbon content taxed (woe to OPEC!).[2]  What makes this plan interesting politically is that it (a) could overcome the objections of the right-wing populists via the carbon dividend, and (b) undercuts the left, both establishment and populist, who have been afraid of a carbon tax and have instead used the less-effective approach of regulation.  Can Baker, et al. sell this plan?  If they can, it may be a signal of a détente of sorts between the right-wing establishment and the right-wing populists, laying the groundwork for further cooperation and the formation of a stronger coalition.

The Establishment Strikes Back, Part II: There is growing concern about fiscal deficits coming from tax cuts and fiscal spending.  Some analysts are suggesting the Federal debt could add another $9.4 trillion over the next decade if Trump’s plans are enacted.  We tend to think these concerns are overblown; the U.S., for example, won’t default on its debt.  However, that isn’t to say we have no concerns about fiscal spending.  Our biggest concern is whether there are enough public investment projects available that would actually generate a positive return for the economy.  Would a new airport in St. Louis be nice?  Yep!  Would it make any airline want to put a hub in St. Louis and improve the efficiency compared to the current airport?  Probably not.  Some public investments are winners—the interstate highway system was a clear one.  The National Parks are probably net winners too.  We doubt most urban light rails will boost growth.  The same is true for defense spending; until you need it, it’s mostly dead spending.  Thus, the key should be the return from the public investment relative to the debt service.  Still, there does appear to be a growing unease in Congress over fiscal spending and debt, which may make it harder for Trump to enact all his plans.  Without fiscal spending, the argument for dollar strength is seriously undermined; this is an issue we are watching closely.

[1] It should be noted that the U.S. economy promptly dropped in 1937 after Roosevelt attempted to balance the fiscal budget and the Fed raised rates.