[Posted: 9:30 AM EDT] U.S. equity futures are under pressure again this morning.  Here is what we are watching:

What’s eating the market?  We are seeing a series of foreign central bank easing actions or signals thereof.  Yesterday, the Reserve Bank of Australia surprised the markets with a rate cut.  Today, the Reserve Bank of India joined the parade.  The Bank of England didn’t ease at its meeting this morning (as expected) but offered a gloomy view for Brexit,[1] suggesting uncertainty surrounding the deal is undermining the economy.  In light of these actions, we are seeing the dollar move higher this morning.

The relationship between equities and the dollar is not all that straightforward.  There are periods when equities seem bolstered by dollar strength but other periods when dollar weakness is supportive to equities.  The upper lines on the chart below show the yearly change in the JPM dollar index and the S&P 500.  The lower line shows the 10-year rolling correlation.  During the 1980s, the correlation between the series was modestly negative; a stronger dollar tended to be a bearish factor.  In the 1995-2000 stock market boom, the two series were positively correlated.  But, since 2000, the correlation has been steadily weakening and is now quite negative. 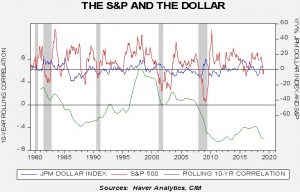 One of the first items taught in basic statistics is that “correlation doesn’t equal causality.”  This is an important observation, especially now.  As the cost of computing power falls, it becomes rather easy to data mine and find all sorts of correlations.  In fact, some in the tech world seem to believe that correlations are all that matter.  But, most of us realize that correlations absent theories are not only a waste of time and resources, but they can be dangerous.

So, what’s the theory here?  A stronger currency is a form of monetary policy tightening.  Currency appreciation lowers the cost of imports, easing inflation, and makes exports less competitive, reducing labor demand.  In the 1990s, equities were rising on “new era” beliefs, that technology and the end of the Cold War were game-changers which gave a massive boost to investor confidence.  In addition, the Asian economic crisis occurred then and the resulting dollar appreciation was seen as a sign of strength.  But, outside that period, to a greater or lesser extent, a stronger dollar has been a negative factor for equities.  Usually, it isn’t a huge factor, so the impact either isn’t enough to matter all that much or it can be offset by the Federal Reserve by easing or not tightening.

We are seeing clear signs that the global economy is weakening.  The EU today lowered its growth forecasts.[2]  China’s economy is slowing.  Although the U.S. economy is also slowing, growth remains above trend.  The growth difference may be leading to renewed interest in the dollar.  Another factor is the prevalence of negative yielding debt around the world.

The U.S. doesn’t have such debt and thus the recent increase in negative yielding debt may be helping the dollar as well.

Our base case is that the dollar will depreciate this year.  On a parity basis, it is rich against most currencies at a level that usually leads to a reversal.  But, if the divergence in growth is leading to dollar strength, it will tend to weigh on U.S. equities.  In the face of appreciation, the FOMC should be open to easing; however, in U.S. policy, forex is the mandate of the Treasury (even though it lacks any policy tools to affect exchange rates) so the Fed tends to leave the dollar out of its discussions.  We have seen equities rise on the back of the Fed’s reversal on monetary policy.  Nevertheless, if global growth continues to slow and foreign central banks continue to ease, going neutral may not be enough for further market appreciation.

Brexit: It’s getting a bit nasty this morning.  European Council President Donald Tusk indicated that there is “a special place in hell” for U.K. Euroskeptics.[3]  PM May is trying to reopen talks on the Irish backstop but Tusk’s comments suggest she isn’t likely to get the EU to budge.[4]  What makes this worrisome is that Tusk has been openly encouraging the U.K. to reverse course and stay in the EU.  His comments seem to indicate he has concluded that all is lost and a hard Brexit may be inevitable.  Meanwhile, Labour Party leader Corbyn offered May conditional support for a soft Brexit.  He is demanding May accept a permanent customs union, a pledge to maintain the EU’s worker’s rights, commitments for U.K. participation in EU agencies and unambiguous agreements on EU security arrangements.[5]  Most of these are an anathema to the Brexiteers.  What Corbyn is doing is creating conditions where Labour MPs could vote for May’s plan (or something close to it) that may be enough to overcome Tory opposition.  His goal is to split the Tories permanently and hang what is bound to be an unpopular agreement on May.  As we noted yesterday, it looks like May can either have (a) a soft Brexit and break up the Tory Party, or (b) maintain Tory Party unity and a hard Brexit.  Obviously, she wants to split the horns of that dilemma so her plan seems to be to run out the clock and hope that the Euroskeptics in her own party cave at the last hour rather than suffer a hard Brexit.  In other words, she is risking option (b) in order to avoid being the party leader that will be remembered by history as the one who broke British Conservativism.  Thus, the risks of a hard Brexit are rising.

The farm problem: Chinese tariffs on U.S. grain have been a majorly negative factor for the farm belt.  Despite measures from the administration to lessen the blow from lost sales, economic conditions in the farm belt are deteriorating.  Bankruptcies are rising and debt levels appear unsustainable.[6]  There is no doubt that some farmers likely overexpanded during last decade’s biofuel boom and have taken on too much debt to maintain their operations as grain prices fell.  But, the loss of export markets has put vulnerable operations in grave danger.  This isn’t a new story in American agriculture.  The cycle of expansion and contraction is well known.  However, farmers now have a proximate cause for their woes—administration trade policy.[7]  That may not be completely fair; after all, the administration didn’t force them to overcommit.  But, the tariffs will be seen as the event that triggered the farm downturn.  Given how critical the farm belt is in Trump’s base, we would expect the growing crisis to add an incentive for a short-term trade deal with China.  And, obviously, our cited articles will be known to Chinese trade negotiators.  We would expect them to use this news to maximum leverage.

The government and 5G: The Trump administration is reportedly preparing a plan to expand the government’s role in developing the next generation of technology and artificial intelligence.  The administration is said to be unveiling a series of executive orders[8] to support efforts to gain superiority in these areas.  The U.S. is in a race of sorts with China on these new technologies, which China wants to dominate as part of its “China 2025” policy (which it currently disavows).

European news: A day after Germany unveiled its new industrial policy[9] designed to support large industrial combinations to create national champions, the EU shot down a merger between two large railroad companies on competition concerns.[10]  The U.S. ambassador to the EU, Gordon Sondland, suggested the EU and the U.S. should “lock arms” against a common enemy, China.[11]  There has been increasing commentary about how Europe can keep the U.S. in NATO and maintain America’s support for Europe.  The tradeoff may be that Europe severs its relations with China in return for American support.  Northern Macedonia (reflecting its new name[12]) has formally joined NATO, becoming the 30th member of the treaty group.[13]

This is the seasonal pattern chart for commercial crude oil inventories.  We would expect to see a steady increase in inventory levels that will peak in early May.  This week’s increase, like last week, was below the seasonal norm.  If this continues, it would be a bullish factor for oil prices. 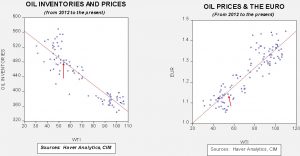 Based on oil inventories alone, fair value for crude oil is $58.27.   Based on the EUR, fair value is $55.51.  Using both independent variables, a more complete way of looking at the data, fair value is $55.74.  By all these measures, current oil prices are generally in the neighborhood of fair value.  However, we still expect prices to move toward $60 later this year on rising oil exports.