The rally in equities continues.  An update on the Wuhan virus.  Good news on trade.  Potentially important developments in Germany.  Brazil cuts the policy rate.  Update on the weekly energy data.  Here are the details:

Wuhan virus: Although it is clear that financial markets have already moved past the virus, the disruption is still affecting the Chinese economy.  Confirmed cases are up to 28,349 with 565 fatalities.  The confirmed cases continues to lag our linear model; we suspect the model is closer to the truth and that there are lots of unconfirmed cases as reports suggest China’s medical system remains overwhelmed. 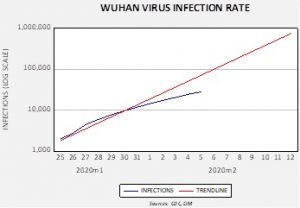 So, why are equity markets, even in China, moving past this event so quickly?  We suspect there are two reasons.  First, financial authorities have added so much liquidity to the financial markets that it is just difficult to sustain declines.  With investors holding about as much cash as they want, additional funds simply find their way to markets.  Second, the economic weakness will be temporary and will likely either keep policy easy or may lead to further easing.  We are seeing increasing signs that Asian policymakers are cutting rates or allowing their currencies to quietly depreciate.  For example, the Philippine central bank today cut its benchmark short-term interest rate by 25 basis points to 3.75%.  That action follows the Thai central bank’s decision yesterday to cut its benchmark rate by 25 basis points to 1.00%.  Singapore’s monetary authorities have also signaled they are comfortable letting the currency depreciate a bit to cushion the blow from the epidemic.

Trade: In order to facilitate China’s agreement to buy more U.S. goods, Beijing has slashed tariffs on $75 billion of U.S. imports.  We still doubt that China will be able to meet its obligations in the short run, but this cut does suggest the country is taking appropriate steps to meet its promises at some point.  Meanwhile, U.S. firms are apparently becoming adept at taking cosmetic steps to avoid tariffs, using transshipments and other tactics to avoid the levies.  This behavior shows why using tariffs as a trade tool isn’t perfect; the tariffs come with rules that can be gamed.

A sign from Germany: As regular readers know, we characterize political affiliation by left/right and establishment/populist.  In general, establishment figures are the ones who lead but in Western democracies they get elected by wooing the populists.  However, there are times when the populists become disgruntled with the establishment and attempt to take control themselves.  We are in one of those times.  Within the populists, there are extremes.  In the U.S., these extremes tend to be diluted within the major parties but, in European parliamentary systems, they often form their own parties.  For example, in Italy, we saw a government of the League and the Five-Star Movement, the former a rather extreme right-wing populist party and the latter a left-wing populist.  In Germany, the centrist parties have shunned the populists, forming a “grand coalition” of the establishment-right CDU/CSU and the establishment-left SDU.  However, in a recent regional election in Thuringia, a government was formed by the right-wing populist Free Democrats in concert with the CDU and the AfD, another right-wing populist party.  The Free Democrats are a more libertarian party, whereas the AfD has evolved from an anti-EUR party to a right-wing identity party.  Giving power to the AfD has sent shockwaves through the German political system, raising fears that the establishment parties may be at the point where they will create coalitions with the populist parties, creating the potential for radical policy agendas to emerge.

Brazil: Banco Central do Brazil cut rates by 25 bps and signaled an end to its rate-cutting cycle which began in 2016.  When the cycle started, the Selic rate was 14.25%; the latest move has taken it to 4.25%.  As rates have declined, the real has also weakened but, so far, currency depreciation hasn’t led to significant inflation or trade retaliation by the U.S. 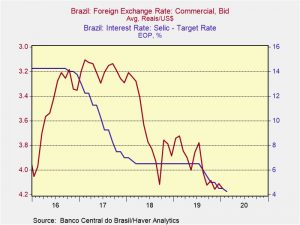 In the details, U.S. crude oil production fell 0.1 mbpd to 12.9 mbpd.  Exports fell 0.1 mbpd, while imports were unchanged.  The rise in stockpiles was in line with forecasts.

This chart shows the annual seasonal pattern for crude oil inventories.  This week’s rise was consistent with seasonal patterns, although the level of inventory accumulation continues to lag historical norms.  As the chart shows, oil inventories usually rise into late spring and then decline significantly into late summer.  Last year, this pattern was disrupted to some extent because of exports.

In energy news, OPEC+Russia was unable to come to an agreement to cut production; Saudi Arabia was looking for a 0.6 mbpd cut to address the Wuhan virus.  Oil prices fell on the news.  China has declared force majeure on oil shipments due to the crisis.  China is warning that its oil demand will likely decline 25% due to the economic disruptions caused by the Wuhan virus.  After President Trump hosted Venezuelan opposition leader Juan Guaidó at the White House yesterday, officials warned the administration will soon ratchet up sanctions on firms doing business with President Maduro’s government.  The officials specifically mentioned major international oil firms, which would likely be yet another headwind for the energy sector.  The Guardian Council has disqualified more than 90 sitting parliamentarians and hundreds of reformist candidates from the Iranian parliamentary elections to be held February 21.  The action suggests the hardline constitutional watchdog is trying to boost the position of radical conservatives in parliament, taking advantage of public sympathy for Gen. Qassem Soleimani’s assassination last month by the U.S.