Global equities are higher as reports of a potential vaccine are lifting optimism.  U.S. considers new trade regulations.  A comment on globalization.  Good news on cancer.  Here are the details:

Wuhan virus:  The level of reported infections worldwide is 24,627, with 493 fatalities.  Although the pace is rising, it does appear to be slowing relative to our trend model. 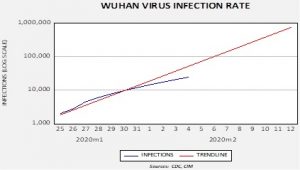 There are a number of negative headlines.  Hong Kong will now impose a 14-day quarantine on people arriving from China.  Automakers are starting to shut down plants due to the lack of parts from China and warn of broader closures if China does not reopen production.  Airlines are suspending service to Hong Kong as demand declines.  A WHO official openly criticized the Xi government for slow reporting of the Wuhan virus.  Chinese officials are cracking down on online criticism of the government’s handling of the crisis and preventing independent reporting of the epidemic.  Other developments are equally worrisome.  Authorities are trying to track those who may be infected and are using both new and old methods.  Harkening back to the Mao era, citizens are reporting on each other.  The government is also using its “deep state” surveillance to track those who may be carrying the virus.  It is starting to look like the Wuhan virus will also delay the implementation of China’s purchases from part of the “Phase One” agreement, although there has been no official acknowledgement from the USTR.  There are reports that local food prices are rising in the areas isolated from the rest of China.

However, what is sending equities and commodities higher this morning are positive, although unconfirmed, reports that scientists may be close to a breakthrough on a vaccine.  And, there are also unconfirmed reports that researchers in China may have created a new drug to combat the virus.  WHO is warning that it does not have any proven therapies for the Wuhan virus but news of both an anti-viral and a potential vaccine are boosting sentiment this morning.  Another development of note is that there is evidence to suggest the Chinese government may be spurring equity-buying to buoy Chinese stocks.

Overall, our take is that even though there remains a high level of uncertainty and there will undoubtedly be damage to the global economy, the weight of liquidity is such that any declines in asset markets are being met with investors looking to put money to work.  Therefore, any hint of positive news can seemingly overwhelm the bad news and lead to higher equity prices.

Trade:  Lost in all the political news and virus fears, we noted three developments of interest. First, the Commerce Department appears to be setting up a mechanism where it will levy countervailing tariffs on countries it deems to be using a weak currency to boost its exports.  This development is notable on a couple of fronts.  The mandate for forex policy resides with the Treasury, so it isn’t exactly clear how Commerce will determine if a foreign country is violating its rules.  Treasury does have a mechanism to deal with currency manipulation, but it has proven to be ineffective.  If Treasury determines a nation is a currency manipulator, it starts a “clock” that allows for negotiation and if talks fail, then the U.S. can take countermeasures.  It is possible that Commerce could simply act once Treasury makes the determination that manipulation has taken place.  We have serious doubts this plan will work; the likely response from a foreign nation to additional levies would be to simply depreciate its currency further to offset the tariff.  At some point the administration will likely realize that its most potent tool to reduce the current account deficit is a deliberate and credible policy of currency depreciation.  That point has not occurred quite yet.  Second, the White House is considering withdrawing from a WTO program that facilitates international competition for government procurement.  The program is designed to allow foreign nations to bid for government purchases.  By exiting, the U.S. could force purchases to U.S. firms only, or use it as a tool to punish, or reward foreign suppliers.  Third, reports indicate that the U.S. is granting fewer tariff exemptions, meaning that U.S. firms are now being forced to adjust.  The goal is for greater domestic procurement.

Deglobalization:  Although economists and pundits continue to argue that deglobalization is impossible, this position flies in the face of history (the world has gone through cycles of globalization and deglobalization mostly due to the presence of a creditable global hegemon).  It is worth noting that the world was highly integrated before WWI, and nearly deglobalized by the end of WWII.  Our position is that the U.S. is steadily giving up on its hegemonic position and the world will break down into regional blocs over time.  Here are a couple of stories that fit that narrative.  First, the U.S. is pressing for an independent 5G infrastructure that would avoid the use of Chinese components.  Second, Chinese owners are selling off U.S. commercial property, most likely due to pressure from Beijing.

Cancer rates fall: According to the American Cancer Society, the cancer death rate in the U.S. dropped by 2.2% from 2016 to 2017, its largest single year drop ever recorded. This is big news given that cancer is the second-leading cause of death in the U.S. From an economic standpoint, this report suggests that Americans will be able to live longer and more productive lives. Additionally, the longer Americans live the more care they will likely need in old age, therefore the report is generally bullish for industries that offer healthcare services.