Equity markets around the world continue to spiral lower.  Turkey and Syria are on the brink of war and Europe may face another refugee crisis in the midst of COVID-19.  U.K. talks tough on trade.  Here are the details:

COVID-19:  There are 83,774 reported cases worldwide with 2,867 fatalities.  There are widespread reports of disruption around the world.  China has issued a record number of force majeure certificates, which allow exporters to break contracts with suppliers without penalty.  China is also forcing banks to give small company borrowers grace periods and loan forgiveness to prevent bankruptcies.  World ports report significant disruptions.  Japan has closed all its schools.  The U.S. has locked down its largest military base.  The IMF is considering making its April meeting “virtual.”  Nigeria reported the first case of the COVID-19 virus in sub-Saharan Africa.  After a coronavirus patient’s dog tested positive for COVID-19, the Hong Kong government said any pets belonging to infected patients must also be quarantined.  Although this may sound funny at first glance, it’s also a serious development because it may mean the disease has a whole new means of transmission to humans.

Meanwhile, the U.S. is struggling to develop a response to the virus.  It appears that U.S. health workers did not follow infection disease protocols in treating those evacuated from Wuhan, raising the possibility that these workers could become disease vectors if they contracted the illness.  The White House is insisting on vetting all public comments on the virus; although that does allow for consistent messaging, as we saw in China, it can also delay bad news and facilitate wider infection rates.  At the same time, the vice president has selected Debbie Birx to act as “coordinator” on combating the virus, which sounds like a “czar.”  One of the problems of selecting Pence to oversee the role is that a president can’t fire a vice president—if the vice president’s performance is poor, he would remain in office.  By creating a coordinator position, that person could be fired if she doesn’t meet up to the job.  Another worry—the fractured insurance system may prompt some Americans from seeking treatment for fear of inability to pay.  A report from Florida serves as a cautionary tale.

As a reminder, all the research we have analyzed suggests that 80% of those infected report mild or nearly no symptoms.  This is good and bad news.  The good news is that, unless this virus mutates into a more virulent form, most victims will think they had a cold.  The bad news is that it will be nearly impossible to prevent its spread.  In fact, the measures taken to thwart the spread may cause more economic damage than the disease itself.

On that topic, U.S. equity markets have fallen into correction territory in record fashion.

The S&P is falling much faster than seen in corrections or bear markets.

This sort of decline suggests equity markets are anticipating recession.  Is this reasonable?  The key, from where we sit, is the reaction of consumers.  As we have noted before, U.S. GDP has become unusually reliant on consumption. 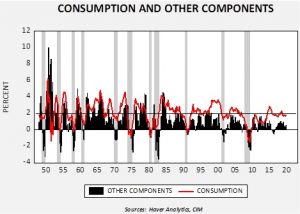 The four-quarter average of the contribution to GDP from consumption is below 2%, which in the past has often led to recessions.  The other components—net exports, investment and government—are not contributing enough to offset a serious decline in consumption.  The worry is that if consumer confidence is rattled and households rein in spending, it will be difficult to avoid at least a mild recession.  Should a virus that will affect a supermajority with a cold be enough to bring down consumption?  If humans were rational, it shouldn’t; but, there is ample evidence to show that humans are anything but rational.

Meanwhile, we are seeing some rather odd actions in other financial markets as well.  Gold is not acting like a safety asset today, suggesting that investors only have eyes for Treasuries.  The EUR has been surging as carry trades unwind; the EUR has been a funding currency and as borrowers retreat the EUR is being bought back.  Financial markets expect the FOMC to cut next month (we would be surprised), while Lagarde says the ECB probably won’t move.

Turkey and Syria:  Syrian (or Russian) attacks on Turkish positions in Idlib province have killed 33 Turkish soldiers.  Turkey, a member of NATO, should be able to request “Article 5” support, which details that an attack on one member is an attack on all.  So far, NATO has been reluctant to support Turkey.  President Erdogan is preparing a military response but one of the factors he is facing is a wave of new refugees from the embattled province who are fleeing the war.  Turkey does not want to deal with the influx and is threatening to “open the borders” to refugees so they can flee to Europe.  This is the last thing Europe needs right now.  It still hasn’t resolved the last inflow of refugees and a new inflow when some European nations are closing borders due to COVID-19 could lead to yet another political and economic crisis for Europe.

Brexit:  Although we believe most of this “bellowing” is posturing, PM Johnson is threatening to walk away from trade talks with the EU if his demands aren’t met.  The four big issues are regulatory alignment, fishing territory, financial services and the negotiating deadline.

Shelton update:  It appears that Judy Shelton may be confirmed after all.  She has turned two GOP senators who were skeptics and only needs one more to get approved.  She would be a reliable dove as long as a Republican is in the White House, but we would expect her to develop talons if a Democrat wins in November.

OPEC:  Separately, as the virus panic disrupts economic activity and pushes down oil demand, Saudi Arabia is pushing OPEC and its partners, including Russia, to cut oil output by a collective 1.0 mbpd when they meet next week in order to shore up prices.  That compares with a proposal earlier this month to cut output by 600,000 barrels per day, which Russia strongly resisted.

Israel:  By the time we publish our Monday morning Daily Comment, Israelis will be voting in their third parliamentary election in a year.  In recent polls, Prime Minister Netanyahu and his conservative Likud Party have been pulling away from challenger Benny Gantz and his Blue and White coalition.  However, even if Likud beats the coalition by one or two seats as expected, Netanyahu would still not have enough seats to govern on his own and would have to form an alliance with smaller parties.