[Posted: 9:30 AM EDT] The U.S./North Korea summit ended abruptly as the leaders reached an impasse.  We are seeing some modest flight to safety market action.  Here is what we are watching this morning:

The summit abruptly ends: The two sides reached an impasse.  North Korea was willing to shut down its Yongbyon nuclear complex but wanted a full sanctions lift.  The U.S. was willing to lift sanctions but only if North Korea ended its nuclear production, gave up all its existing warheads and closed other nuclear sites the U.S. has discovered.[1]

We admit to being surprised at how the meeting ended.  It seems that continuing to talk and go through the motions of ceremony, even with the same result, would have helped maintain relations.  At the same time, once it becomes clear there is no room for further discussion it does make sense to simply back away.  Market reaction was mostly centered in Asia, with South Korean markets[2] taking a dive and the KRW depreciating.  Other Asian markets weakened as well.

One other takeaway of note is that it seemed President Trump really wanted a deal.  In fact, there were worries he would cave to a weak agreement just to make an agreement.  The fact that he walked away from talks does indicate he won’t be taken.  This had to be noticed in Beijing.  If the president was willing to turn away from these discussions, perhaps he might do the same thing with Chinese negotiations.  Was this a deliberate plan?  We doubt it.  The president’s style is to improvise, so we think it’s more likely he figured out a deal wasn’t forthcoming and determined leaving made more sense.  But, if he discovers this move affects China’s viewpoint, expect him to play it up.  On this note, USTR Lighthizer outlined a deal in testimony yesterday where the U.S. will place tariff “triggers” on China to force compliance.  Although the histories of such arrangements are spotty (a good example is the exercise the Treasury performs twice a year to determine if nations are manipulating their currencies—although such manipulation is common, it is rarely enforced), it remains to be seen whether Chairman Xi would agree to such a regime.[3]

India v. Pakistan: There are actions being taken to reduce tensions.  Pakistan has indicated it will return the captured pilot.[4]  However, there are persistent reports of sporadic clashes along the frontier.  As we noted yesterday, Pakistan has been isolated after the attack in Kashmir and thus has an interest in de-escalation.

Brexit: It is looking increasingly likely that Brexit will be delayed.  On March 12, Parliament will vote again on PM May’s deal.  Given that it lost in historic fashion earlier this month it will likely fail again.  The next day, Parliament will vote on whether it supports a hard Brexit.  That is unlikely as well.  On the 14th, a third vote supporting an extension of the deadline will be before legislators.  That will almost certainly pass (if the two earlier votes are rejected, it is the only logical conclusion).[5]

Here is the latest data from PredictIt on exit.

The question is whether the U.K. will leave the EU on March 29.  Note that this decision market hasn’t been above 50 cents since late last year.  Essentially, the markets have been expecting a delay, which explains why the GBP hasn’t fallen.

European news: The ECB looks poised to move its stance toward easier policy as Eurozone growth slows.[6]  Spain’s former PM Rajoy testified against Catalan separatists yesterday, indicating the separatists bear responsibility for the violence and deaths that occurred in last year’s protests.[7]  Greece’s creditors, displeased with the pace of reforms in Greece, may not participate in the country’s first private post-crisis funding.[8]

This is the seasonal pattern chart for commercial crude oil inventories.  We would expect to see a steady increase in inventories that will peak in early May; the pattern coincides with refinery maintenance.  Last week’s large decline is an anomaly and is very bullish for oil prices.  The unexpected drop in inventories was partially due to an early rise in refinery operations, although the increase isn’t far out of seasonal norms.  But, the slide in imports was a shocker. 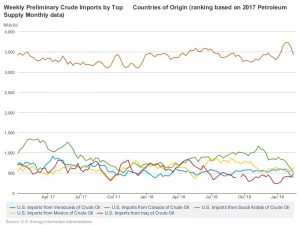 This chart shows the top five foreign suppliers of U.S. crude oil since early 2017.  The data is on a four-week average basis.  Note that we saw a sharp drop in Canadian crude oil imports, which will probably be reversed at some point.  However, there has also been a profound decline in imports from Saudi Arabia.  Since Q4, imports have declined by half.  That drop reflects Saudi oil policy and will not be reversed anytime soon.  We also point out that Venezuelan imports have also declined but the level isn’t all that large.  Overall, the drop in Saudi imports “moved the needle.”

Based on oil inventories alone, fair value for crude oil is $58.71.  Based on the EUR, fair value is $54.03.  Using both independent variables, a more complete way of looking at the data, fair value is $54.90.  By all these measures, current oil prices are roughly in the area of fair value.  This week’s drop in crude oil inventories was a shocker and probably won’t be repeated, but it also likely means that we won’t see the usual seasonal build in crude oil stocks, either.  Thus, it improves the odds that prices hold their current levels into spring.