Global equity markets are down again due to the continued spread of COVID-19.  U.S. futures are down this morning.  We update the latest on the virus, including some thoughts about the Fed’s reaction function.  Despite everything, U.S. housing data is looking remarkably robust.  There is our usual recap of the weekly energy report.  Here are the details:

COVID-19:  The number of reported cases worldwide is 82,446 with 2,808 fatalities.  The number of new cases is now higher outside of China.  The decline in risk assets today appears to be driven by reports of endogenous infections—a case in California does not appear to have any ties to China.  This raises the potential that asymptomatic carriers could be spreading the disease.  The reports of new cases in the U.S. and Europe are making it clear that attempts to contain the virus have failed.  Now the focus is shifting to dealing with the onset of COVID-19 in the U.S. and Europe.

Meanwhile, there have been rising reports of aggressive actions overseas.  Japan has announced it is closing schools for an extended spring holiday.  The U.S. and South Korea have called off military exercises.  As the virus spreads across Europe, nations are taking steps to try to slow the expansion.  Brazil confirmed its first case.  Holy sites in the Middle East are being closed.   There are reports that 600 patients are being monitored for the disease in Massachusetts.

President Trump held a news conference on COVID-19 yesterday evening.  He tried to strike an upbeat tone but acknowledged the virus is going to be with us.  He appointed VP Pence to coordinate the response.  These sorts of events are risky for elected officials.  Many a mayor has been ousted for failing to respond to weather events; the unpredictable is risky.  So, the president was trying to thread the needle between showing enough caution to be seen as taking the event seriously, but not act so concerned as to prompt a panic.  That is a hard line to weave.  We could see some officials ousted in this process.  As we saw in China, the usual political response is to underreact and underreport on hopes the event doesn’t worsen.  At the same time, overdoing it is risky too.  President Ford’s reaction to the 1976 Swine Flu outbreak was so strong that the action to counter the outbreak (that really never happened) caused more problems than the flu itself.

As we have been saying ad nauseam, our central case is that this will be a three- to four-month event that will pull some nations into recession.  We doubt the U.S. will go into recession, but the event will leave a mark, especially around the world.  We would expect a negative impact on earnings.  The key issue to watch is whether the supply crunch that will come from COVID-19 becomes a demand event.  In other words, as the virus spreads in the U.S., watch household consumption and consumer confidence.  If stores empty out and Opening Day has few attendees, the follow-on effects on demand could bring the economy into a downturn.  At the same time, our view on equities is that this decline, which is into correction areas in the U.S., is probably short-lived.  That doesn’t mean we are out of the woods yet in the near term.  As the bull market has extended, all sorts of schemes to enhance performance using option strategies have become imbedded into equities.  How these tactics are affected by the recent weakness is anyone’s guess, but our expectation is that they will increase volatility.

At the same time, watching China is instructive.  It appears that China may be through the worst of it and is now trying to recover.  Emergency measures are starting to come down in some areas and there are calls to ease restrictions further.  Getting workers back on the job is proving to be complicated.  Some companies are resorting to bonuses to get workers to return.  If China is any guide, the wave of infection takes about six weeks to peak and then it dissipates.

The Fed is under pressure to cut rates.  Partly that is coming from public pressure.  The financial markets are another area of pressure.  The implied LIBOR rate from the two-year deferred Eurodollar futures is down to 100 bps, signaling that the Fed needs to cut rates by at least 50 bps. 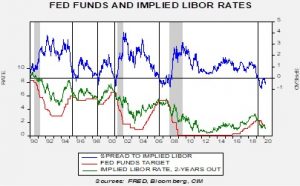 So, what about timing?  Since 2000, the FOMC has tended to lower rates when the 12-week average of the VIX rises above 20.  Since the VIX has just started rising, we may need to see more equity weakness before the Fed decides to move.  It might move before then, but the combination of a falling implied LIBOR rate and higher equity market volatility would make a strong case for the central bank to act. 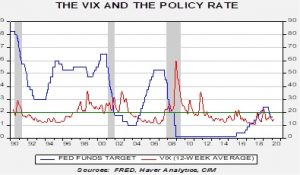 We do expect the Fed to cut rates, probably in the summer.  FOMC members are still signaling “wait and see.”  But, the bank’s reaction function to financial signals is making a clear case that further rate reductions are warranted. 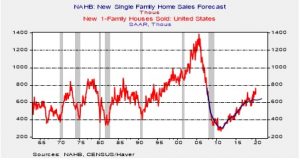 This chart shows new single-family home sales compared to the National Association of Home Builders’ forecast for sales.  As the chart shows, current sales are very strong.  Before 1995, sales tended to range between 400k to 800k.  We are approaching the high end of that range, and with current low rates there is no reason not to expect that we will move above 800.  And, it is perhaps not a moment too soon as we have been observing reports of homelessness and substandard housing.

Odds and ends:  The EU and U.K. remain at odds, with the U.K. signaling it will not abide by EU environmental and labor laws.  The EU is viewing this as a breach of the agreements made before Brexit.  Russia is planning a nationwide poll on constitutional reforms.  Germany is hinting it will ease the “debt brake” and fiscally stimulate.  South Korea’s central bank kept rates steady, thwarting expectations of a rate cut.

In the details, U.S. crude oil production was unchanged at 13.0 mbpd.  Exports rose 0.1 mbpd, while imports fell 0.3 mbpd.  The inventory build was less than forecast due to rising exports and falling imports.

This chart shows the annual seasonal pattern for crude oil inventories.  This week’s report was consistent with seasonal patterns and the gap between the normal pace of inventory accumulation and the actual remains narrow.  Seasonally, next week should see a notable rise; if stocks fail to rise around 3.0 mb next week, it would be considered somewhat bullish.