[Posted: 9:30 AM EDT] Equities are taking a breather this morning in a news heavy environment.  Here is what we are watching this morning:

Brexit: The drama continues.  PM May met with her cabinet this morning and will support a vote on delaying Brexit past the March 29 deadline[1] and another vote that would not allow a hard (no deal) Brexit.[2]  Meanwhile, opposition leader Corbyn has reversed his earlier positon and will back a second referendum.[3]  In fact, a number of Labour leaders have indicated they will support a Remain position (Labour, like the Tories, are divided on Brexit).  May opposes extending the deadline; we suspect her support for these measures is designed to push Brexit supporters into adopting her plan as the best alternative to no Brexit.  The votes are seen by the market as lessening the odds of a hard Brexit; the GBP rallied on the news.  We will likely have votes on these issues in the next day or so.

Powell to Capitol Hill: Chair Powell will visit the capitol for his semi-annual congressional testimony.[4]  We doubt new ground on monetary policy will be established; the FOMC is on pause and will likely remain so as the economy goes through a soft patch.  We would expect regulation to be a topic of interest, with left-wing political figures pressing the chair on macro prudential issues.  Expect lots of coverage but nothing market moving.

Here is an interesting chart that might help explain why the FOMC decided to pause: 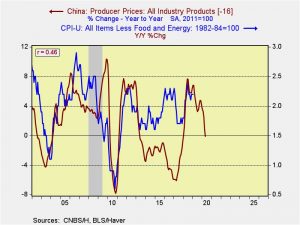 This chart shows U.S. core CPI along with China’s PPI, both on a yearly change basis, starting with China’s entrance into the WTO.  Although not a perfect correlation, it does suggest that, with a bit more than a five-quarter lead, China’s producer prices affect U.S. core CPI.  The recent drop in China’s PPI would signal that price pressure in the U.S. should dissipate in the coming months and give the FOMC room to keep policy steady.

The administration’s decision to delay additional tariffs on China may have also affected monetary policy.[5]  A paper by the San Francisco FRB suggests that the second round of tariffs could have boosted personal consumption prices by 0.4% and business investment costs by 1.4%.[6]  So, the delay gives Powell additional reasons to be patient.

Zarif turns in his resignation: Iran’s foreign minister, Javad Zarif, has offered to resign from his position.[7]  It isn’t clear why he resigned or if President Rouhani will accept the resignation.  Zarif was the lead negotiator of the Iran nuclear deal and has come under pressure from Iranian hardliners for negotiating the deal in the first place.  At the same time, he is schooled in Western diplomacy and if Iran’s plan is to hope President Trump is defeated in 2020 (and assuming a Democratic president would want to revive the nuclear agreement) then keeping Zarif in government would make more sense.  If Rouhani accepts the resignation it would be a signal that Iran has given up hope that the nuclear deal will return even with a change in government in Washington.  We expect Rouhani to turn down the offer; by resigning and having his offer refused, one would expect the pressure from hardliners to dissipate.  In other words, Zarif may be bluffing.

Trade: We have been expecting the administration to accept a lesser trade deal with China to avoid the economic dislocation that broader trade conflict might bring.  After all, the 2020 elections are not all that far away.  We have noted that hardliners in the administration, Navarro and Lighthizer, might balk at a lesser deal and could resign.  However, this isn’t the only area of political pressure.  Democrats are also pressing the administration to push back on China.  It isn’t clear if this is an ideological position or simply supporting the “right” policy that would also harm the president’s reelection chances.[8]

Venezuela: VP Pence met with South American leaders yesterday to shore up support to isolate the Maduro regime.[9]  Pence also announced additional sanctions on Venezuela and promised additional measures would be coming soon from the Treasury Department.[10]  So far, the military remains aligned with Maduro; we suspect U.S. sanctions will be designed to reduce cash flows to the military in hopes that fears of pauperism might lead the brass to change sides.

Trump on oil: Yesterday, we noted that the president called for OPEC to increase production and reduce oil prices; futures prices dropped on the news.  OPEC has responded by saying it will maintain and likely extend current production cuts.[11]

League wins:We are watching Italian politics closely because its current coalition is the rare mix of both left- and right-wing populists, a “Nader coalition.”  We have noted recently that the alliance is fraying as the Five-Star Movement, the left-wing of the coalition, has been losing favor.  Regional elections held yesterday are continuing that trend.  In the election in Abruzzo, the League doubled its share compared to the region’s vote in the last general election, while the Five-Star Movement saw its share drop in half.[12]  If current trends continue, we expect the League, the right-wing side of the current arrangement, to eventually end its pairing with the Five-Star Movement and join with the center-right to form a new coalition.  Although the Nader coalition remains theoretically possible, in nature it is difficult to manage given the wide divisions between left- and right-wing populists on social issues.  What remains to be seen is whether the center-right would control policy in a right-wing coalition or if the League would gain the upper hand.