[Posted: 9:30 AM EDT] It’s a risk-on day with China’s equities on a tear.  Here is what we are watching this morning:

It’s official—tariffs are delayed: Although anyone paying attention would not be surprised by this outcome, President Trump confirmed that the next round of tariffs on China will be delayed.[1]  Citing “substantial progress” on intellectual property and technology transfer, the president tweeted that a delay would be implemented.  The delay means that $200 bn of Chinese goods will not, for the time being, see a tariff hike from 10% to 25%.  Before this announcement, there was some concern about what appeared to be an open conflict between USTR Lighthizer and the president over the issue of the memorandums of understanding (MOU).  The president seemed to be indicating that the MOUs didn’t matter whereas Lighthizer views them as the structure of the trade agreement.  Since the administration isn’t planning a formal trade agreement (which would require congressional approval), the MOUs are the deal.[2]  The tiff between the president and the USTR is probably more about form than substance; the White House is arguing that the president was merely indicating he wanted a longer term agreement and seemed to misunderstand what an MOU meant.  The reason we highlight this discussion is because we view Lighthizer’s tenure at the administration as critical.  If he concludes that he is being impeded by the president from getting a substantive agreement because the White House needs a pre-election “win,” then we believe the USTR will resign.  Thus, the friction may be a sign of underlying tensions on this potential division.

So, despite what appeared to be an obvious direction in these talks, financial markets liked the delay in tariffs.  We note that although U.S. markets are stronger this morning, Chinese equities jumped,[3] suggesting less optimism outside the U.S.  Our positon remains unchanged—we will get a deal with China on trade but not the deal.[4]

Venezuela: The weekend ended in a stalemate.  The aid massed at the Venezuelan frontier mostly stayed out of the country.  There was significant violence and growing talks about outside intervention.[5]  We are not sure what outside intervention would look like; if an invasion is decided, we suspect the U.S. would want to lead a multilateral force that would unseat Maduro.  Getting Maduro out is probably doable; stabilizing the country is another matter.  The best way out would be for the military to turn on Maduro but, so far, that hasn’t happened.

Brexit: The drama continues.  PM May is delaying her final vote on her program until March 12[6] in a clear bid to push close to the deadline and bring Brexit supporters to her plan.  Meanwhile, later this week, Parliament will vote on a new plan that would preclude a hard Brexit.  An earlier plan failed but given how May is using the deadline to improve the odds of her arrangement, it might just pass this time.  At the same time, the EU has countered with a proposal to delay Britain’s exit by up to 21 months if a deal isn’t done.[7]  We suspect the EU is putting this long delay out there as a way to scare Brexiteers that if they don’t take May’s deal then it won’t mean hard Brexit but an eternal limbo of delay.  A long delay would be bullish for the GBP and would increase the odds of avoiding a hard Brexit.

Trump on oil: The president is calling for lower oil prices; futures prices dropped on the news.

The president has been sensitive to the impact of oil prices on political popularity, although the impact of energy prices on consumer confidence is modest at best.  He is pressing OPEC to boost output.  We suspect, unlike what we saw last autumn, the cartel won’t help him this time.  In the fall, the White House pressed OPEC to increase production to offset Iranian sanctions.  However, the U.S. granted numerous countries waivers on Iranian purchases, leading to oversupply and a sharp drop in prices.  We doubt OPEC will heed the call of Washington this time around.  Thus, the drop today probably won’t hold.  In addition, we note that Mexico’s oil production has fallen to a three-decade low, which is reducing supply.[8]

The economy: The Chicago FRB released its National Activity Index today.  It’s one of our favorite indices, giving us a broad monthly look at the economy.  As the report below shows, the data isn’t pretty.  We smooth the data in the chart below to account for monthly volatility, but the report is a concern.  We note the Atlanta FRB’s GDPNow report is projecting a 1.4% increase in GDP for Q4. 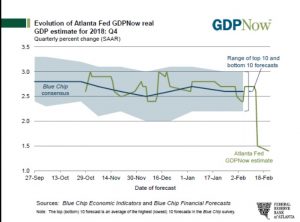 Here is the contribution table: 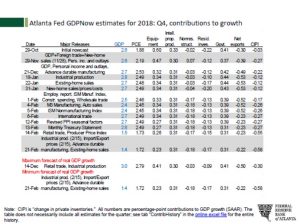 The mid-month data on retail sales, industrial production and durable goods lowered personal consumption expenditures by about 75 bps.  Falling inventories reduced it earlier by another nearly 30 bps.  We would expect Q1 to be soft as well; the FOMC’s pause appears to be well timed.

The Fed: We are in the midst of a generational change in policy management.  The 1970s were a period when the Fed accommodated inflation impulses to support full employment.  The Volcker reformation led to a focus on inflation reduction and the management of inflation expectations.  Now, there is a rethink going on at the central bank in light of the breakdown of the Phillips Curve model.[9]  New ideas include moving to an inflation target that is less fixated on short-term increases above target to targeting inflation over a longer period, which would allow for inflation “overshoots.”[10]

And, it’s not just the Fed.  We are seeing an inflation rethink across the economy.  The emergence of Modern Monetary Theory, which explicitly uses inflation to guide fiscal policy, is a sign that policymakers are thinking more broadly on deficits.  An op-ed in the NYT over the weekend suggests that deficits may not matter much anymore.[11]  Even Warren Buffet has backed down on deficits.[12]  This looks to us like the early stirrings of reflation.  In the short run, this turn won’t matter all that much but the past four decades of steadily falling inflation, falling interest rates and rising equity multiples may not be duplicated over the next four decades if this trend continues.