Xi versus Anbang: The Chinese government has taken control of privately held Anbang Insurance Group and arrested its chairman, Wu Xiaohui, charging him with economic crimes.  This is clear evidence that the Xi government is cracking down on foreign investment by China’s private sector.  Anbang is a large conglomerate that owns some trophy properties, including the Waldorf Astoria in New York.  The government is claiming the company had “illegal business operations which may seriously endanger the company’s solvency.”  A number of other large conglomerates with large overseas holdings have also come under government scrutiny.  There are two concerns; the first is that these conglomerates have sometimes used wealth products to fund their growth.  Since these require higher interest payments, there is likely worry among regulators that if one of them cannot service the debt incurred then it could undermine confidence in all wealth products as a class.  The second issue is more political; the CPC wants to maintain control over the economy and foreign investment tends to undermine that control.  Thus, cracking down on these high-flyers may work to scare other wealthy Chinese from seeking to move assets overseas.

May and the Tories formulate a Brexit plan: The Conservatives generally divide between hard and soft Brexit supporters.  The former want a clean break with no close ties with the EU, while the latter want to keep a customs union in place to maintain free trade with the EU.  Of course, with that outcome, the soft Brexit supporters will likely have to accept the free flow of immigrants and accept EU regulations, which creates the worst of all worlds—being in the EU but without any voice in shaping policy.  Thus, the hard Brexit camp is at least logically consistent.  However, leaving the EU’s customs union will mean severe economic disruption for the U.K.  The plan that has emerged is that Britain will try to negotiate a free trade deal with the EU similar to the recently completed one with Canada.  That deal would allow the U.K. to secure nearly all the benefits of the customs union without actually joining it in its current form.  There is almost no chance the EU will go along with this outcome.  We think the odds of another referendum are rising and May’s tenure is becoming increasingly shaky.  Labour’s leader, Jeremy Corbyn, has indicated he will call for a soft Brexit policy and recommend joining the customs union.  If enough Tories defect to this position, May could face a no-confidence vote and new elections could be in the offing.

Concern about Mnuchin: The EU minutes reveal that the ECB members were clearly worried the U.S. was about to embark on a pre-Rubin policy of currency jawboning, designed to weaken the dollar.  A rapid appreciation in the EUR would complicate monetary policy for the ECB, forcing it to likely maintain an accommodative stance.

As the seasonal chart below shows, inventories are usually rising this time of year.  What we are seeing is very bullish as the usual seasonal build in stockpiles isn’t occurring this year.  The longer this continues, the more fundamentally bullish this becomes. 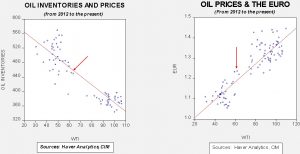 Based on inventories alone, oil prices are undervalued with the fair value price of $67.34.  Meanwhile, the EUR/WTI model generates a fair value of $75.69.  Together (which is a more sound methodology), fair value is $73.14, meaning that current prices are below fair value.