[Posted: 9:30 AM EDT] It’s a modest risk on day today in front of “mega Fed”—seven FOMC members will talk today.[1] Here is what we are watching this morning:

…several of the participants argued that rate increases might prove necessary only if inflation outcomes were higher than in their baseline outlook.

Several others indicated that if the economy evolved as they expected, they would view it as appropriate to raise the target range for the fed funds target later this year.

We argued that there appears to be a split on the board related to the relationship between inflation and growth.  Essentially, the two variables have become much less sensitive to each other.  Our take is that, due to globalization and deregulation, the aggregate supply curve has “flattened” or, technically speaking, has become more elastic, meaning that higher levels of output have only modest effects on price levels.  This change has made the conduct of monetary policy more difficult because the Fed no longer has a working model for the economy.  If supply constraints are less relevant, then the Fed has some difficult policy choices.  If faster growth doesn’t affect inflation significantly, then it would appear the Fed should only focus on inflation.  In fact, there are other important central banks in the world that operate with a single inflation mandate; the ECB is the most prominent.  However, there is a risk to this plan.  Because inflation is low, the Fed could provide too much liquidity to the economy that, instead of finding its way into the goods markets, ends up in the financial markets, creating asset bubbles.  The FOMC doesn’t have the mandate to target equity markets, although we can make a case that policy has become increasingly sensitive to volatility.[2]  But, so far, policymakers have been reluctant to aggressively use financial asset prices to set monetary policy (imagine a Fed chair testifying before Congress that “we raised rates because the P/E was too high”; although a defensible proposition, it would likely cause a political backlash).

At this juncture, we think there are three schools of thought developing at the Fed.  The first includes the diehard Phillips Curve advocates; they view the current low unemployment as a threat to price stability and argue for continued rate hikes.  They are only being pacified now due to recent economic weakness but would argue that the fed funds target should be around 3.5% to 4.0%.  The second are actually Phillips Curve advocates as well but ones who suggest the relationship has changed and we should be “patient”until we know what the new one is and allow inflation to actually develop.  We think Chair Powell is in this camp.  The third group argues that the Phillips Curve relationship was spurious, an accident of history, and therefore the Fed should target inflation alone with an eye on financial markets, either making excuses to raise rates when financial markets are frothy or pressing for macroprudential actions (e.g., raising margin debt requirements) when necessary.  What is important for our analysis is that there is no real consensus on policy right now and thus predicting the path of the fed funds target has become much more difficult.  Two articles today on this topic are worth a read.[3]

Venezuela: As noted yesterday, this weekend, the opposition is planning to move tons of donated aid across the Venezuelan borders.  Maduro has closed the border with Brazil[4] along with the sea lanes from three Caribbean islands.[5]  There could be violence.[6]  If there is, we will be watching to see how the Trump administration reacts.[7]  In other news, Hugo Carvajal, the former head of intelligence, has turned against the Maduro regime.[8]

Trade talks: President Trump will meet with China’s trade envoy, Liu He,[9] this afternoon.[10]  As we noted yesterday, there are hopes that the Memorandum of Understanding (MOU) will come at the culmination of talks.[11]

Brexit: PM May is trying to prevent other soft Brexit Conservatives from leaving her party to join the new centrist group.[12]  The departure of three MPs has complicated May’s ability to hold her coalition together; in some respects, the Tory Party is a bit more hard Brexit-leaning, especially since the DUP is critical to her majority.  As we have argued all along, May will likely have to decide if she either wants a soft Brexit and a generationally damaging split in the Conservative Party or a hard Brexit and party unity.  However, we may be wrong on this argument; May could end up losing both, ending up with a hard Brexit and the end of the Conservatives. [13]  There are rumors the EU will give May a 90-day extension; we don’t see how that will make conditions better but it does suggest the EU is equally worried about a hard Brexit.

Trouble down under: Yesterday, we discussed how China is putting pressure on both New Zealand and Australia.  There were reports that China’s Dalian port has banned Australian coal imports.[14]  China has indicated today that the ban news isn’t true.[15]  So, we will continue to watch this issue to see how it progresses.

Elections in Spain: PM Pedro Sanchez[16] has called for snap elections on April 28 after the Spanish Congress rejected his budget.[17]  However, the budget isn’t really the issue of this election—it’s Catalonia.  Sanchez tried a different tactic with Catalonian separatists compared to the previous conservative administration.  The latter used imprisonment to try to stop the movement; Sanchez tried negotiating.  Neither one worked.  This is the third election in Spain in three and a half years.  Spanish politics reflects what we are seeing across the West—parties and political alliances are fraying and new configurations are forming.  We doubt the upcoming elections will resolve these underlying tensions.

This is the seasonal pattern chart for commercial crude oil inventories.  We would expect to see a steady increase in inventories that will peak in early May; the pattern coincides with refinery maintenance.  Note that inventories are rising at a slower pace than normal.  This is mostly due to crude oil exports.  If this slow pace continues, it would be a bullish factor for oil prices. 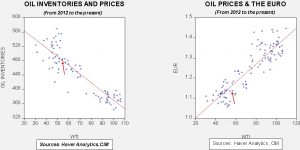 Based on oil inventories alone, fair value for crude oil is $57.10.   Based on the EUR, fair value is $53.97.  Using both independent variables, a more complete way of looking at the data, fair value is $54.22.  By all these measures, current oil prices are roughly in the area of fair value.  If inventories continue to rise, as the seasonal pattern would suggest, we might see oil prices correct modestly in the coming weeks.  But, we still look for $60 prices through the summer.

[16] Not this Pedro Sanchez https://www.youtube.com/watch?v=BD5F7KFhZfA