[Posted: 9:30 AM EDT] It’s mid-week (already!).  Global equities are stronger this morning and U.S. equity futures are flat.  Here is what we are watching this morning:

More U.K. defections: Yesterday, we reported that seven Labour MPs left their party to form a new centrist party, called the Independent Group.  Today, three Tory MPs left their party to join them.[1]  May’s coalition of Tories and the DUP gives her a narrow majority of two seats; her party holds 317 seats and the DUP 10.  The loss of three MPs actually puts her now in the minority and thus makes her vulnerable to a no-confidence vote.  However, given that she has survived one no-confidence vote already,[2] we doubt another one will come anytime soon.  But, for now, it does appear she is operating a minority government.

Brexit: May is on her way to Brussels for more negotiations.[3]  This looks to us as a “going through the motions” exercise but May is probably hoping for language on the Irish backstop that might mollify her coalition.  It isn’t likely.  On the backstop issue, May officially scotched a rather odd plan from Brexit Conservatives to create a high tech border control mechanism on the Ireland frontier that would act as an invisible customs monitor.[4]  Since the technology doesn’t currently exist, it was rather easy to put it to rest.  Brexit is steadily progressing toward next month’s deadline.  May’s tactics appear to be to run out the clock and leave MPs with one of two options, either her plan or a catastrophic hard Brexit.  The MPs are trying hard to avoid that difficult choice but they don’t have an alternative plan.  However, there is one increasingly obvious downside—businesses are quitting the U.K. on fears of a hard Brexit.[5]

Fed: The FOMC releases the minutes of its most recent meeting today.  We will pore over the report for any clues about policy but we don’t expect too much new information.  Although we expect some caution that the markets may have become too sanguine on rate expectations,[6] what we are hearing from Fed officials suggests the committee is rather comfortable with leaving rates about where they are now.[7]  In fact, most of the focus has now, for better or worse, shifted to the balance sheet.  Our position is that the balance sheet’s effect has mostly been psychological. 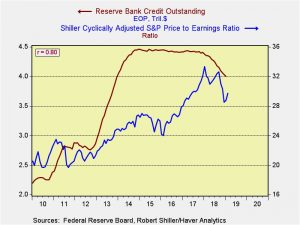 This chart overlays the CAPE with the Fed’s balance sheet.  Since the last recession, the two tended to track each other, although expectations of tax reform did lead to a large rise in the multiple in late 2016 through 2017.  Note that the P/E has declined as the balance sheet has contracted.  There are obviously other factors that contributed to the multiple contraction.  Fears of a trade war are part of the contraction and the CAPE, which uses the 10-year average of earnings, is rolling off the 2008 earnings drop, thus lifting the “E.”  But, we would argue that the balance sheet did contribute to weakening investor sentiment.  Thus, if the FOMC signals an end to QT, it would be reasonable to expect a rise in P/E.

Trade: According to reports, China’s lead negotiator, Vice Premier Liu He, is planning to discuss a memorandum of understanding (MOU) with U.S. negotiators.  Such a document would be a clear signal that an agreement was reached.  The fact that Liu was given the authority to make a MOU would suggest that China is serious about a deal.[8]  President Trump has signaled some flexibility by making the March 1 deadline somewhat optional.[9]  The U.S. is pressing China to promise to not use its exchange rate as a tool to manage its trade issues.[10]  However, former Fed Chair Yellen cautions that such promises may not be possible to keep.[11]

Huawei (002502, CNY 4.09) and the Europeans: The U.S. is working to prevent Huawei from selling its products to allies.  However, Europe is cool to cooperating with Washington.  The U.K. has indicated that it views the risks to using the Chinese company’s products for 5G as “manageable”[12] and Germany has indicated it may buy the company’s products.[13]  We expect this issue to become increasingly complicated.  The U.S. will likely threaten not to do a free trade deal with the U.K. after Brexit if London goes down this path and may use the car tariff threat against Germany to accomplish its goal with Huawei.

A curious report out of China: A Chinese blogger reports that local governments in China are banning price cuts on housing.  Price cuts on unsold inventory have been a source of unrest in China; households that bought at a higher price face an immediate decline in wealth if the prices on new homes fall.  Thus, local governments appear to be signaling to developers that they cannot engage in price cuts to clear inventory.[14]

Purges in the Hermit Kingdom: Reports indicate that Kim Jong-un has purged between 50 and 70 wealthy and high-ranking officials.  Some of this action appears to be a simple shakedown.  North Korea has been gradually and quietly using markets to boost the economy but the regime likely fears that if some people get too wealthy they may opt to gain political power.  In addition, the regime may need money and therefore the crackdown is a rather harsh form of taxation.  Some of the crackdown does appear to be aimed at critics who oppose talks with the U.S.  To some extent, the purges probably indicate that the regime does want to improve relations with the U.S. and Kim wants to ensure that he can make changes without opposition.[15]

And, finally:There are some pundits who don’t really offer any penetrating insights but are important for their signaling.  We tend to view Tom Friedman at the NYT in this light.  His insights are rarely penetrating but he says them well and we use them as signals of elite consensus.  In other words, he is almost never in front of anything, but when he says something it officially becomes common knowledge.  In today’s NYT, he has an op-ed suggesting that the U.S. now has four political parties.[16]  Friedman, a spokesman for the center-left elite, hammers the populist left in his article.  Of course, he hits at the populist right and the center-right as well.  The analysis in the article doesn’t break any new ground, but the fact that he wrote it is important—it is now common knowledge that the political system is split and the fragile populist/elite coalitions of the past four decades are no longer holding (and, for what it’s worth, in our opinion the divide began in 2008).