Welcome back!  Equities are under pressure due to Apple (APPL, 324.95) news.  The U.K. rejects the EU trade agreement proposals as it appears Britain is ramping up fiscal spending.  The Netherlands threatens the EU/Canada trade deal.  We’re seeing rising tensions over the U.S/China technology war.  Here are the details:

COVID-19:  Today’s big news on the virus came from Apple, which announced it would not meet its quarterly revenue targets due to production disruptions caused by the COVID-19.  Although the news of supply disruptions should not be a shocker, until this report, this expectation was merely generalized.  Now, it is real.  We expect other companies will start admitting similar problems in the wake of this announcement.  Companies are working on anti-viral drugs but are reporting snags in getting approvals for testing.  We are seeing the virus’s impact on global economic activity as trade has been weakening, Japan’s GDP slumped, and a combination of post-consumption tax blues and the loss of Chinese tourists.  Europe is missing Chinese tourism as well.

The latest data shows 73,345 confirmed cases with 1,874 fatalities.  Although the numbers are rising, the pace of the increase is showing signs of slowing. 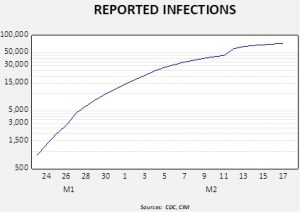 Of course, we offer our usual caveats; we suspect the actual number of infections is much higher, but the lethality is much lower than the official data suggests.  Although nothing we have seen convinces us that our take on the disease is wrong (we expect one weak quarter from the event), we remain vigilant for the unexpected.  We do note that China’s equities have recovered their losses since the return from the New Year holiday, supported by fiscal and monetary stimulus from Beijing.

In other related news, the CPC has postponed the National People’s Congress meetings usually held in March due to COVID-19.  This is an important meeting and the fact that it is being postponed shows the degree of concern among CPC leadership.  President Moon called for “emergency steps” to prevent the COVID-19 virus from derailing the South Korean economy.  According to Finance Minister Hong Nam-ki, this month the government will offer emergency low-interest loans to a range of companies in the airline, shipping, travel and restaurant industries to cushion the blow

U.S./China tech:  The battle over Huawei (002502, CNY 2.85), in particular, and U.S. attempts to retard China’s technology development, in general, continues.  The U.S. has been pushing European nations to avoid using Huawei’s technology; Britain has already rejected U.S. overtures and Germany appears ready to follow the U.K. lead.  The U.S. has announced it is considering banning the export of U.S. microchip machine tools.  The world is rapidly heading toward a “one world, two systems” situation in technology.  Needless to say, such a world would operate at a lower level of efficiency.

Brexit:  The EU is offering a trade deal with the U.K. in exchange for a “level playing field” on rules and regulations.  Westminster is outright rejecting such an arrangement, which it should; there is no point to Brexit if the country leaves only to follow rules that it no longer has input in setting.  Meanwhile, PM Johnson appears to be ramping up a fiscal splurge.  If it occurs and the BOE turns more hawkish as a consequence, it should be bullish for the GBP.

EU:  There are two items of note.  The Netherlands, normally a supporter of free trade within the EU, may reject the recent free trade deal with Canada.  Under EU rules, all the members must approve a free trade arrangement, which explains why getting anything approved is really hard.  Under normal circumstances, we expect the smaller states or France to be leery of free trade deals, but if the Dutch are done with free trade then there is little hope that any new treaties are possible (take note, Brits!).  Why the trouble?  Agriculture.  Farmers in the Netherlands are afraid of the agricultural power of the central North American plains; however, as usual, the worries are couched in safety terms.[1]  Second, despite recent visits by Facebook (FB, 214.18) CEO Mark Zuckerberg, the EU is still giving the company the cold shoulder and pressing for more extensive regulation.

Russia-Turkey:  The Turkish government yesterday sent a delegation to Russia in an effort to forge a ceasefire agreement for northwestern Syria.  Nevertheless, Turkey continues to pour troops and equipment into the area and has threatened to attack Syrian forces there if they don’t stop targeting Turkish-backed rebels.  Such a Turkey-Syria conflict would raise a serious risk that Russia would be drawn in.

Odds and ends:  In defense of U.S. projection of power, Sen. Graham (R-SC) pushed back against a Trump administration proposal to withdraw U.S. troops from areas of Africa.  This stance shows how the establishment remains at odds with the populists over the U.S. hegemonic role.  As turmoil continues in Germany, there are growing calls for Chancellor Merkel to resign.  A sign of the times—Greek and Italian bond yields are falling as investors view them as alternatives to Bunds.  The Taliban says it has a peace deal with the U.S.  Car dealerships are encouraging beleaguered car buyers to purchase a vehicle before selling or trading the old one and voluntarily allow the current car to be repossessed.  Such stories usually start to emerge when credit stresses are rising.  Sen. Sanders (I-VT) and Rep. Ocasio-Cortez (D-NY) have introduced legislation that would ban fracking in the U.S. by 2025.  Although the bill has no chance of passage, it shows a striking blindness on the part of the populist left.  The cost of adjustment for this bill, designed to combat climate change and other environmental ills, would fall almost entirely on low income households who would face significantly higher gasoline costs as oil production falls and prices rise.

[1] For the record, even with consuming “unsafe” food, Canadians manage to have a life expectancy of 82.3 years, just beating the Netherlands at 82.1