It looks like we are having a pause day after a strong week for equities and foreign exchange and steadily rising interest rates.  Equity futures have turned to unchanged, while the dollar and Treasuries are higher.  However, market moves are fairly benign.  The Chinese New Year is today; as we mentioned yesterday, Chinese markets will be closed into next week and several other Asian markets were closed as well.  Here is what we are watching today:

Tariff hikes in India: PM Modi has been promoting a “Make in India” policy that has been something of a disappointment.  In response, earlier this week, his government announced duty increases on a wide range of products.  India’s development has deviated from the rest of Asia.  From Japan in the 1960s to China in the 1980s, the path to development was based on building a manufacturing base through mercantilism.  Policies were designed to stifle domestic consumption through non-existent safety nets, consumption taxes and an undervalued exchange rate.  As long as the U.S. was willing to play the role of importer of last resort, a function tied closely to providing the reserve currency, the development model worked quite well.

India did not follow that model.  Instead, Indian policy following its independence was essentially autarky.  The country didn’t trade much and built quasi-public national champions that dominated domestic markets.  The model followed the British Labour Party policies after WWII (and advocated today by Jeremy Corbyn). This policy led to high inflation and slow growth.  As India began to develop, it had more success in services and developed a sophisticated trade in financial, medical and technology services.  However, manufacturing lagged in part due to the aforementioned autarkic policies.  To build mass employment, India needs manufacturing to expand.  Modi has tried to build India’s manufacturing with apparently little success.  We are not at all surprised to see India move in the direction of increasing duties; this is part of the mercantilist policy mix that has worked well for others.  However, conditions that made that policy mix successful have and are changing.  The U.S. is becoming increasingly unwilling to play the importer of last resort role and could retaliate against India’s actions.  It is possible that India’s manufacturing base never rivals China, Japan, et al. because it is missing a key element—a willing buyer.

Growth estimates come down: The Atlanta FRB has released its GDPNow estimate for Q1 GDP.  As the chart below shows, it was initially quite elevated but has declined rather sharply. 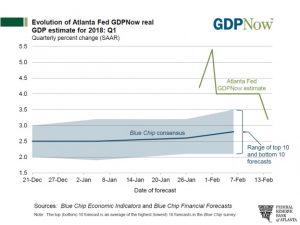 GDP is expected to rise 3.2% in Q1, which is still quite robust but well below the nearly 5.5% rate estimated earlier this month.  The culprits for slower growth are weakening consumption and investment. 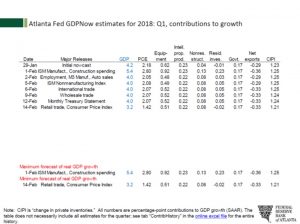 The recent retail sales and CPI data have shaved 60 bps from GDP and weaker residential investment was responsible for the rest of the decline.  Net exports have become an increasing drag on growth; we expect the net export sector’s drag on growth to rise as the data flows the rest of the quarter.

Rising stress: We closely monitor a number of stress indices.  The two we rely on most come from the FRBs of Chicago and St. Louis.  The former has a longer history while the latter tends to be more sensitive and thus give earlier (but more noisy) signals.  The St. Louis FRB Stress Index jumped last week.

This is a decade graph of the two series.  Note that the St. Louis number rose sharply last week.  Both numbers remain below zero, which indicates that stress really isn’t a concern at this point.  However, if it continues to rise, it will signal broader problems in the financial markets.