[Posted: 9:30 AM EDT] U.S. equity futures are steady to higher this morning in quiet trading.  There is some optimism on the China/U.S. trade talks and on the Fed’s balance sheet.  Here is what we are watching this morning:

Trade talks: Although there isn’t much evidence of real progress (e.g., no memorandum of understanding emerged),[1] the two sides are continuing to talk[2] and President Trump has indicated that he is willing to extend the deadline.  Treasury Secretary Mnuchin described the talks as “positive,” which was seconded by Larry Kudlow.[3]  Both have been dovish on Chinese trade; no such characterization came from USTR Lighthizer, a trade hawk.  Chairman Xi also lauded progress on talks.[4]  There are reports that China will offer to end subsidies to Chinese exporters but, so far, such plans lack details.[5]  Other reports suggest China really hasn’t moved on exporter subsidies or forced technology transfers but is making the usual offer of large purchases in a bid to end trade pressure.[6]  Our expectation hasn’t changed.  President Trump needs to avoid a trade war with China because it will weaken the U.S. economy going into the critical election year in 2020.  Thus, we expect a deal but not the deal that would really change China’s behavior.

The balance sheet: The Fed’s balance sheet is a controversial topic.  There has been a good bit of market consternation about the reduction of the balance sheet, or quantitative tightening (QT).  Our research has suggested that the impact of quantitative easing (QE), or the expansion of the Fed’s balance sheet, was mostly psychological; if the FOMC was seen as out of tools after fed funds reached zero percent, the perception likely would have led to market panic.  However, the impact on the real economy (impact on interest rates, lending behavior) from QE was nil.  Still, it clearly did affect investor sentiment.[7]  This chart shows why QT has become such a hot topic. 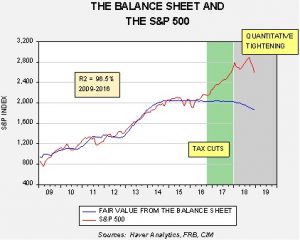 This chart shows the S&P 500 along with the fair value from a regression where the S&P is the dependent variable and the balance sheet is the independent variable.  The match between the two series is very tight from 2009 to 2016, with an R2 of 96.5%.  Equities departed from the model during the discussion of tax cuts after President Trump’s election but now that the tax cuts have passed, the focus appears to have returned to the balance sheet just in time for QT.  Again, if the impact of the balance sheet is psychological, it makes sense that its reduction would have an impact on investor sentiment.

Governor Brainard indicated yesterday that the FOMC may be winding down QT much sooner than the markets expected.[8]  That news would be supportive for equities if true.

Q4 looking soft: The Atlanta FRB GDPNow forecast for Q4 has plunged to 1.5%, being hit by the soft retail sales data released yesterday. 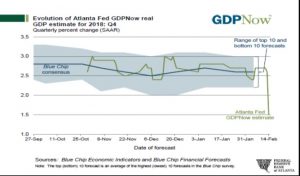 The contribution to growth table shows that the slide in consumption was the primary culprit for the forecast downgrade. 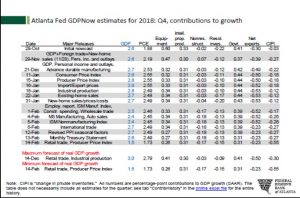 If this forecast holds, the odds of the Fed moving rates higher will likely be off the table until H2, if it occurs at all.  Today’s IP data (see below) will likely depress the forecast further.

Brexit:  In what appears to be a classic “own goal,” PM May suffered yet another Parliamentary defeat on a bill that was non-binding.  The bill was an endorsement of the government’s ability to negotiate with the EU and show EU negotiators that May had the support of the legislature.  May wanted the vote to show the EU that she could bring a deal to fruition if they were more flexible.  It failed 303-258.[9]  Financial markets still believe that a hard Brexit will be avoided.  If it is, it looks increasingly like it will take a MP revolt of lawmakers in both the Conservative and Labour parties to defy their leaders and force an extension or a second referendum.  Such a revolt may require new parties to emerge or destroy the existing ones.

Chinese inflation data: CPI eased modestly from 1.8% to 1.7% on a yearly basis.  However, producer prices (which tend to reflect company profitability) fell into negative territory at -0.1%. 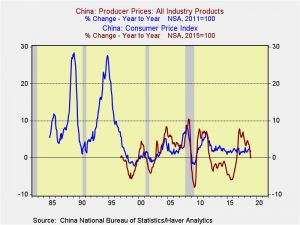 Weakening PPI will likely prompt the PBOC to consider further credit easing, which would be supportive for Chinese equities.

Correction: In Wednesday’s comment, we noted that car loan delinquencies were up for older Americans.  That isn’t really true.  A sharp-eyed reader noted that we were a bit colorblind on this chart. 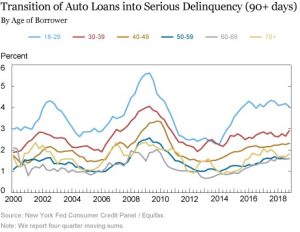 We mistakenly thought the blue line showing the highest level of delinquencies represented the 50-59 age bracket.  To quote John McLaughin, “WRONG!”[10]  Our apologies.  The highest delinquency age bracket is actually 18-29.