We are seeing a sharp flip in financial markets following a higher than expected print in CPI (see below).  Here is what we are watching:

Is Netanyahu in trouble?  The Israeli police have recommended that Israel’s PM, Benjamin Netanyahu, be indicted for the crimes of bribery and fraud.  Although the PM says he will fight the charges, they do appear serious and may derail his political career.  From here, the attorney general must decide if the evidence supporting the recommendation is solid enough to proceed with the indictment.  We expect this process to take several months but, during that time, it will act as a cloud over Israeli politics.

Zuma faces a no-confidence vote: South African President Zuma is facing a showdown in the legislature in the form of a no-confidence vote.  Zuma has so far refused to leave office despite being ordered to do so by his party, the African National Congress.  Zuma has tried to negotiate an exit that would last several months but his party wants him out.  He faces serious corruption charges and could face years of costly litigation if he leaves the presidency.  Thus, we suspect he is trying to make a deal to leave office in return for some sort of amnesty.  The no-confidence vote could force him from office perhaps as soon as tomorrow.  Zuma’s departure is bullish for the ZAR and precious metals.

Mester for vice chair?  Cleveland FRB President Loretta Mester is apparently under consideration for the vice chair position on the Board of Governors.  We rate Mester as a hawk (we put her at a “2” on our 1 to 5 scale, with 1 being most hawkish).  Although the president promised to shake up the Fed, his selections thus far have been rather conventional and this one would also fit into that characterization.  The White House has indicated the president is not close to filling this position and it is clear more candidates are being considered.

Fed policy: With the release of the CPI data we can update the Mankiw models.  The Mankiw rule models attempt to determine the neutral rate for fed funds, which is a rate that is neither accommodative nor stimulative.  Mankiw’s model is a variation of the Taylor Rule.  The latter measures the neutral rate using core CPI and the difference between GDP and potential GDP, which is an estimate of slack in the economy.  Potential GDP cannot be directly observed, only estimated.  To overcome this problem with potential GDP, Mankiw used the unemployment rate as a proxy for economic slack.  We have created four versions of the rule, one that follows the original construction by using the unemployment rate as a measure of slack, a second that uses the employment/population ratio, a third using involuntary part-time workers as a percentage of the total labor force and a fourth using yearly wage growth for non-supervisory workers. 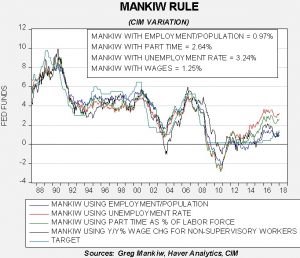 Using the unemployment rate, the neutral rate is now 3.24%.  Using the employment/population ratio, the neutral rate is 0.97%.  Using involuntary part-time employment, the neutral rate is 2.64%.  Using wage growth for non-supervisory workers, the neutral rate is 1.25%.  The rise in core CPI has lifted the various neutral estimates higher but, as we have seen for several months, two of these measures of slack suggest the FOMC has achieved rate neutrality, while two suggest the FOMC is well behind the curve.  We still expect the FOMC to mostly split the difference and end up between 2.25% to 2.50% for the target at the end of this year.  However, the rise in inflation does increase the odds that the hawks on the FOMC will push for continued rate hikes into 2019; in other words, we may see a repeat of the 2004-06 tightening cycle with steady increases in the fed funds target, perhaps with hikes occurring at meetings lacking a press conference.

The CPI data is clearly bearish for equities, as shown by the quick and sharp reversal from higher to lower in this morning’s futures trade.  The usual impact of higher inflation is to lower the P/E multiple, which occurs as interest rates rise.  We are also seeing the dollar lift, although we doubt that can be sustained given the headwinds the fiscal deficit will cause…unless the FOMC finds its “inner Volcker.”  We wouldn’t count on that.  In fact, if monetary tightening worries begin to weigh on equities, expect the president to go “full Nixon” and tweet against Fed tightening.  Instead of Volcker, think Arthur Burns.