[Posted: 9:30 AM EDT] U.S. equity futures are trending higher this morning in quiet trading.  Here is what we are watching:

Brexit: PM May has asked for more time to negotiate with Brussels.[1]  Apparently, she is still seeking changes to the Irish backstop, although there isn’t much evidence at this point to suggest the EU is willing to adjust.[2]  Remainers are increasingly worried that May intends to accept a no-deal Brexit.[3]  However, there are reports, supposedly coming from an overheard conversation in a bar, that May’s real plan is to run out the clock until close to the deadline, when the EU will make a concession on the backstop.  May will then bring this change to Parliament and indicate this is the best she can do…and if they don’t take this deal, Brexit will be forever postponed![4]  There is a ring of truth to this idea.  The EU would be stupid to grant concessions well before the deadline as this would signal to the hardline Brexit supporters that they had been right all along and the U.K. should pressure for even more compromises.  In addition, May is likely betting that the Brexit supporters are a minority in Parliament so the threat should be against this group, not the remainers.  So, her threat of, “Take my deal or Brexit will be indefinitely postponed, maybe forever,” makes sense because it fits both May’s predisposition (she didn’t support Brexit) and the EU’s usual bargaining action (nothing gets done until the deadline looms).  We tend to view all leaks with a degree of skepticism; the goal of this leak may be to shape the EU’s behavior.  But, the plan put forth does make sense in that May would turn on the Brexit group within her own party with the threat of perpetual Brexit delay.  That would not only make her deal successful but also keep the Tories intact.

Budget deal: Although the president did indicate he opposed the budget deal, it looks like he will sign it, averting a shutdown.[5]  The White House will likely try to shift funds from other areas of the budget to add more funding for a wall.

China trade talks: Although significant differences remain, both nations are seeking a “broad outline” of a deal.  President Trump did indicate there is some “give” on the deadline, something we have expected.[6]  We note there are reports that Chairman Xi will meet with U.S. negotiators, which we would view as a positive sign.[7]  We still expect “a deal” but not “the deal” on Chinese trade.  The bigger problem is that China has been taking advantage of the global trade system that the U.S. has developed since WWII.  It is not the first nation to do so but, at some point, all have had to adjust once a certain degree of economic scale is reached.  The U.S. wants China to stop shielding its state-owned enterprises (SOE) from foreign competition and scrutiny.  From the U.S. perspective, the actions China takes gives it an unfair advantage; from China’s perspective, what the U.S. is asking for is a violation of sovereignty.[8]  As we noted in a recent WGR series,[9] China has become a threat to U.S. hegemony and the Trump administration is taking steps to address that threat.  In doing so, the path of globalization that has been in place since the mid-1990s would be seriously undermined and the global economy would be disrupted.  The White House would likely want to avoid this disruption in the critical year before the next election.

Car loans: A number of outlets are citing a New York FRB report on auto delinquencies[10] as a sign of trouble for the economy.  There has been an increase in sub-prime auto loans in recent years so it is no surprise that is where the delinquencies lie. 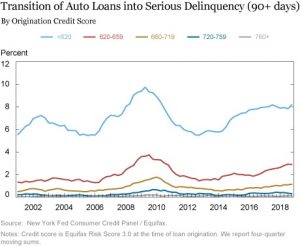 Auto finance companies have the greatest exposure compared to their balance sheet, representing 50% of the $150 bn these firms hold.  Banks with assets over $50 bn hold about 25% of their overall auto loans in this category.  The big banks are not a worry; the auto finance companies, on the other hand, are likely at risk.  However, a couple of things should be noted.  First, unlike houses, cars have a much shorter lifespan, lasting around 10 years or so.  Second, cars are easier to repossess—they roll!  Thus, the systemic impact from this issue can probably be contained.  What is encouraging is that we are not seeing credit card delinquencies at the same frequency. 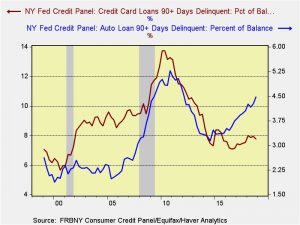 In the last recession, credit card delinquencies rose about three years after the trough in auto delinquencies.  So far, that hasn’t occurred, which reduces the systemic concern.

However, there may be a political issue.  In looking at the age of the delinquent borrower, the bracket of 50-59 is the largest.  Politically, this has been characterized as the “left behind” age bracket.  The rise here could be a sign that the economic conditions of this age range haven’t improved and may put them in play in 2020. 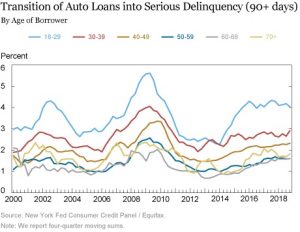 Italy and gold reserves: Yesterday, we reported that the populist coalition in Italy was considering the seizure of the central bank’s gold reserves.  As a follow-up, government officials claim the goal of acquiring the gold is to establish ownership.  But, the government has no intention to use the gold to plug holes in the budget.[11]

China in contact with the Venezuelan opposition: Chinese officials have been in discussions with the Guaido administration to protect China’s massive loans to Venezuela.  This would suggest that China’s real motivation is financial and not geopolitical.  In other words, China has no great affinity for Maduro—it just wants to get its debt serviced.  That is not good news for the Maduro regime.[12]

An old bad idea resurfaces: The Oregon legislature approved measures that will install rent controls on rental properties in the state.[13]  This is a topic that is usually taught in Micro 101 in discussions of price floors and ceilings.  Under nearly all circumstances, such actions lead to shortages of rental properties.  This is because such legislation comes because people feel the rent is too high.  The goal is to lower rents.  The schematic below shows the result. 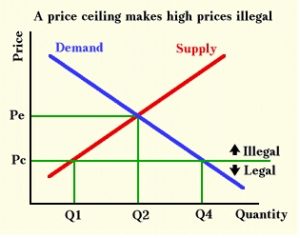 Under price control (Pc), the supply falls to Q1 but the demand is Q4; things are good for those fortunate to get property at Pc/Q1, but there will be others who cannot rent at those prices because the property won’t exist.  The degree of shortage is a function of the price sensitivity (elasticity) of each curve; if the supply is perfectly inelastic (a vertical supply curve) then the impact of rent control is a drop in landlord revenue as there will be no fewer units available but shortages will still develop because more renters will be enticed by the lower rental cost.

The high rent problem is mostly about zoning.  Existing residents tend to oppose new apartment developments because it increases demand on local services and homeowners worry about reducing the value of their homes.  Rent controls won’t increase the supply of new apartments.  What the legislature failed to understand, it seems, is that the high rent issue is a supply side problem; the best way to achieve Q4 would be to increase supply to where the intersection of the supply curve reaches the Pc/Q4 point.  But, that would collide with the NIMBY sentiment that opposes new developments.  A good podcast on this issue is cited here.[14]