Happy Valentine’s Day eve (a gentle reminder to our readers to not forget)!  Equity markets appear to be taking a breather this morning after two strong recovery days.  We expect another few days of “backing and filling” to build a base before a new uptrend develops.  Here is what we are watching this morning:

Was the VIX gamed?  Bloomberg[1] is reporting that the VIX futures were manipulated by a form of order “spoofing,” where an entity places S&P futures option orders that they do not intend to honor.  This activity could push the VIX higher.  It does appear that the VIX move was unusually high relative to the decline in equities; at the same time, we have our doubts that the entire turmoil was caused by manipulation.  It is rather obvious that there was a buildup in short volatility positions based on momentum alone and the short volatility positions were vulnerable to a squeeze when we saw a correction in equities.  However, it is possible that the spoofing, if true, exacerbated the squeeze and led to the panic reversal.

Inflation tomorrow: We get the CPI data tomorrow.  Given recent inflation worries, the market will pay unusually close attention to this report.

Reciprocal trade tariffs?  In an apparent surprise to the White House staff, President Trump indicated he plans to announce a “reciprocal tax” on trade.  The tax seems to be that if they have higher tariffs than the U.S. does, an equalizing tax could be implemented.   This looks to us like throwing a “bone to the base” but, at this point, we don’t see the president or the White House using (or perhaps even having) political capital for passage.  First, current tariff practices are based on years of WTO and multilateral negotiations.  A reciprocal tariff would violate those measures.  Although the U.S. could leave the WTO, the global trade ramifications would be enormous.  It’s not clear if Congress would approve such a tax.  What it does show us is that even if the right-wing establishment that surrounds the president steers policy toward typical establishment GOP policy priorities (lower taxes, deregulation), the president still has a populist theme.  If the U.S. moves toward protectionism, we expect a series of inflation problems to develop and a more profound bond bear market to evolve.  We are not there yet…but we monitor the trade/protection issue very closely.  On a related note, Axios[2] reports that a survey of the majority of CEOs around the world show support for protectionism to restrict technology and intellectual capital.

U.S. attack kills Russian allies in Syria: Bloomberg[3] reports that a force of 200 mercenaries, mostly Russians fighting (volunteering?) for Syrian President Assad, attacked a base and refinery held by the U.S. and allied forces.  According to reports, some of the Russians were veterans of the Ukraine campaign, another area where Russia claimed that volunteers supported operations in a foreign nation.  It is possible that the attack was a rogue operation but it does highlight the level of confusion and uncertainty surrounding the conflict in Syria and western Iraq.

Zuma out?  The African National Congress (ANC) has ordered President Zuma to resign, which would end the scandal-ridden regime and allow for Cyril Ramaphosa, the party leader, to become the new president of South Africa.  Zuma has been trying to stall, asking for a three- to six-month period to exit, but the ANC has apparently had enough.  It is not clear if Zuma will step down.  He likely fears that he will face corruption charges once he is out of office and could end up in prison or face a clawback in illicit funds.  One way or another, we expect Zuma to go which would likely be bullish for the ZAR.  A stronger currency is usually associated with stronger precious metals prices, especially platinum as South Africa is one of two major world producers (the other being Russia).  South African mines pay their workers in ZAR but earn USD when they sell their metals on world markets.  A stronger currency means higher production prices which tends to reduce mining activity.

The chart below shows the relationship of platinum prices to the ZAR exchange rate.  We have inverted the scale; ZAR is quoted in currency per dollar so a smaller number means a stronger currency.  The correlation since 2000 isn’t all that strong, but the correlation since 2010 approaches 95%.  Thus, one of the outcomes from Zuma’s ouster could be stronger platinum prices. 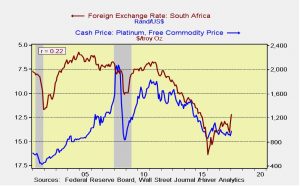 Kuroda set for another term: Current BOJ Governor Kuroda appears on track to be reappointed for a second term.  This is a rare outcome; his term expires in April but if he is reappointed and serves his term he would be the longest serving BOJ governor in history.  Kuroda has been an avid supporter of Abenomics and so Kuroda will likely remain head of Japan’s central bank as long as PM Abe remains in office.

German tensions: Martin Schulz, the leader of the SDP, has made a series of mistakes that have reduced the odds that the SPD rank and file will approve the grand coalition government recently negotiated with Merkel’s CDU/CSU.  Prior to last September’s elections, Schulz indicated he would not join a coalition with the Merkel conservatives.  However, the SDP took a drubbing in the national polls, winning only 20% of the electorate.  When Merkel was unable to cobble together a coalition of Free Democrats and Greens into a government, she would have either had to (a) assemble another grand coalition with the SDP, (b) operate as a minority government, or (c) call for new elections.  The SDP feared that option (c) would lead to even greater losses and thus Schulz had to break his grand coalition promise.  That move angered the SPD membership.  Schulz did negotiate a good deal for his minority party, getting both the finance and foreign ministries, a much stronger outcome than the vote count would have indicated.  Then, he made another unforced error by personally accepting the foreign ministry portfolio, ousting the current SDP holder of that office, Sigmar Gabriel.  The uproar from party members was so intense that Schulz was forced to give up the foreign ministry and allow Gabriel to maintain the office.  Schulz remains party leader but he is deeply wounded politically and it isn’t a certainty that the rank and file vote, which will be completed by March 2, will confirm the grand coalition.  If the vote fails, elections will likely be held later this year and the EUR may face some weakness.

Watching oil: The IEA reported today that OPEC has done a remarkable job in reducing the inventory overhang plaguing the oil market.  However, it warns that rising shale production in the U.S. could scuttle these efforts.  The EIA, the DOE’s data arm, is forecasting that shale output will rise to 6.8 mbpd by the end of March.  Another concern is that part of the recent budget agreement directs the DOE to sell 100 mb of oil out of the SPR, adding to the 189 mb that has been scheduled for sale since 2015.  The government is starting to use the SPR as an “oil piggybank.”  Although the need for SPR has been reduced due to shale production, there is a growing risk that oil prices could spike if a major Mideast oil disruption were to occur.  Finally, the Louisiana Offshore Oil Port (LOOP) is preparing to allow for exports.  The LOOP is the only offshore oil port that can handle supertanker oil directly.  Shifting the LOOP for exports is a major change.  Overall, we remain bullish on oil but these developments are bearish and warrant attention.