It’s a rather quiet Wednesday as global equity markets continue their steady rise.  We have an update on the COVID-19 virus (it now has an official name), along with some disquieting data from JOLTS and headlines about consumer debt.  The EU fires back at the U.K.  The NZD rallies.  Here are the details:

COVID-19:  The Wuhan virus now has an official name; this was done by the WHO to reduce the stigma applied to China.  However, changing the name doesn’t change the general perception.  Documented infections are now 45,171 with fatalities at 1,115.  There are worries that the diagnostic process is missing a lot of cases.  Beijing continues to take aggressive actions to contain the virus, seizing hotels, hospitals and autos to manage the situation.  CPC leadership is following a time-worn tactic of blaming local officials for the crisis; this practice was common during the emperor periods.  At the same time, General Secretary Xi is expressing concern about the economic damage from the virus, cautioning against an overreaction.  Leaders walk a fine line in these situations.  President Ford’s aggressive reaction to the swine flu in the mid-1970s turned out to be an overreaction as the vaccine proved more dangerous than the illness itself.  At the same time, if COVID-19 turns out to be the “big one,” warning of overreaction will look incredibly foolish.  There is growing worry about supply disruptions; commodities have obviously been adversely affected but drug makers are also worried.  Still, overall, financial markets are continuing to look through this issue.  In a world with accommodative policy, it is hard to contain risk assets.

JOLTS:  The Bureau of Labor Statistics releases a dataset that covers job openings, hires, quits and labor flows.  Although the report gets less attention than the payroll and household surveys, it does offer some granular information about the labor market.  The number that has caught everyone’s attention is a sharp drop in job openings.  However, as we show in the chart below, the decline probably had more to do with January than weakness. 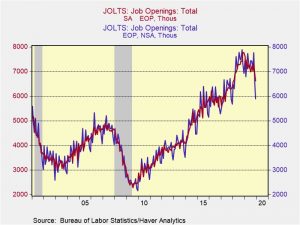 The blue line on the chart shows the non-seasonally adjusted report.  The decline in January is remarkable as job openings fell by nearly 600k.  However, when we seasonally adjust the data, the decline is significant, around 250k, but much less than the headline data would suggest.  The number bears watching; if it continues to decline it would suggest an early warning that the labor market is starting to soften.  We would not be surprised to see a recovery in the coming months as the drop appears to be exacerbated by seasonal factors.

Another chart violation:  The NY FRB publishes data on consumer lending and there are headlines this morning talking about how household debt is at a new record level.  Well, that is true, but the pace of debt accumulation appears rather manageable. 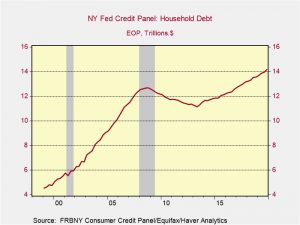 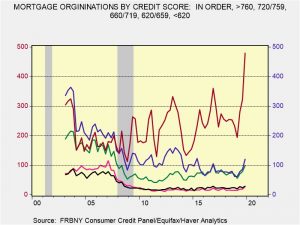 By far, the most mortgage originations are for the highest credit score.  Note that before the Financial Crisis, low credit scores acquired nearly twice as many mortgages as they do now.

German trouble:  We have been documenting the turmoil within the CDU/CSU and the rising threat to Chancellor Merkel’s tenure.  Foreign policy experts are starting to see the void developing as a leaderless Germany essentially becomes a leaderless Europe.

Odds and ends:  The Reserve Bank of New Zealand indicated it was leaving policy rates at 1.0% and did not intend to cut further.  The NZD rallied on the news.  The USTR has issued a report critical of the WTO’s appellate mechanism.  The U.S. wants the WTO to become less of an adjudicator and more of a facilitator of talks.  This is more about advancing national sovereignty over supranational power.  The FTC is expanding its anti-trust investigation of big tech.  The U.S. is accusing Huawei (002502, CNY 2.72) of having the ability to access telecom networks in a bid to discourage allies from using the company’s equipment for 5G.  President Trump is planning a trip to Africa.  In order to bolster a coalition against Iran, the U.S. is expected to recruit the help of Sudan and Morocco.