Happy Monday!  Equity markets continue their recovery from Friday’s late surge.  Among candlestick chart aficionados, Friday’s formation was a “hammer.”  That means there was a large drop but the rally on the close led to a smaller body at the top, taking the form of a hammer.  A hammer is all about “hammering out” the bottom, so there is some technical evidence that this decline may be close to exhausting itself.  Meanwhile, there was lots of news over the weekend.  Here is what we are watching:

North Korea’s charm offensive: The Winter Olympics are in full swing, allowing us here in the Midwest to enjoy watching some of the less common sports.  Kim Jong-un has taken full advantage of the world’s spotlight to send a delegation led by his younger sister and a large contingent of cheerleaders to improve the Hermit Kingdom’s image.  So far, it has been a PR coup for Kim.  He has offered to open up leader talks with South Korea, a rather transparent bid to divide the U.S./South Korea alliance.  Although the talk out of South Korea is that the Moon government is cautious, center-left governments tend to be open to talks with Pyongyang.  The U.S. did itself no favors by suggesting that a conventional war on the peninsula, which would devastate South Korea, is preferable to the North Koreans having a deliverable nuclear weapon.[1]  We don’t think anything is happening here other than Kim wanting to divide the nations that are allied against him.  He is having some success but we doubt anything really changes.  The current South Korean government opposes any sort of military action against North Korea, and Kim is trying to build on that sentiment.

War in the Levant: Over the weekend, an Iranian drone moved into Israeli airspace.  The Israeli Defense forces (IDF) shot it down and made a retaliatory strike against the Iranian base where it originated.  Syrian anti-aircraft fire downed an IDF F-16 which led the Israelis to strike 12 targets in Syria, eight Syrian and four Iranian locations.  All this activity masks a broader issue—the region is up for grabs and Iran, Russia and Turkey are all jockeying for position as the U.S. steadily withdraws.  Iran wants to dominate Syria and form a clear arc from Tehran to Lebanon (which is essentially under Hezbollah’s control; Hezbollah is an Iranian proxy).  Turkey doesn’t want that to happen.  Russia wants Syria as its proxy state and Israel doesn’t want Iran on its doorstep.  Until recently, the U.S. would prevent all this from happening.  Since WWII, the U.S. managed to maintain stability through limited wars and its steady military presence.  However, the advent of shale oil has reduced American dependence on oil from the region and consequently the U.S. role in the region has changed.  During the Cold War, the U.S. was determined to prevent the Soviets from gaining control of the region’s oil; the U.S. wanted to keep that oil available for its free world allies.  Now, with ample North American supplies, the U.S. is questioning why it should pay for maintaining stability in the region while Europe gets cheap oil.  This isn’t just a recent development.  President Bush’s decision to oust Saddam Hussein without a clear plan on how to replace him removed the prime impediment to Iran’s regional aspirations.  The U.S. hasn’t been able to contain Iran since.  We see this conflict as “just warming up.”

A second referendum?  The Sunday NYT[2] reported there is growing support for a second referendum on Brexit.  The article noted regions that previously supported leaving the EU are having second thoughts and even hardline anti-EU political figures, such as Nigel Farage, the former leader of the U.K. Independence Party, would like a second vote to prove that the majority still want to leave the EU.  Would another vote bring a different outcome?  Latest polling show 46% would vote to remain in the EU, 42% to leave.  That is close enough to probably declare it a toss-up.  However, we note that the percentage of voters who were undecided in May 2016 was 14%, and it appeared most of those votes broke for leave.  The undecided vote is now down to 7%.  It is quite possible that a second vote would generate a reversal.  What would the EU do?  Although the rules suggest the U.K. would still need to depart because it said it would, we suspect Chancellor Merkel would allow the U.K. to stay with open arms.  In fact, the British may be able to use the Brexit scare as a way to negotiate more favorable treatment from the EU.  After all, it should be noted that the EU faces a growing authoritarian threat from central Europe (Hungary, Poland) and a contentious vote in Italy in March.  Having Britain stay would lessen tensions.  If a second referendum is called and the decision reverses, we would expect a significant rally in the GBP.

The fiscal debt and Treasuries: OMB Director Mulvaney was quoted over the weekend warning of a yield spike due to the rapidly widening deficit.  In reality, the impact of fiscal spending and the deficit is rather complicated.  Over the long run, the relationship between the deficit and bond yields is essentially nil.  The chart below shows the 10-year T-note yield and the deficit as a percentage of GDP (with the CBO’s forecast, which hasn’t been updated for recent developments).  Note the long-term correlation is -0.06%, or virtually uncorrelated.  Conversely, from 1956 to 1995, the correlation was rather significant at -0.65%.  In other words, as the deficit rose (became more negative on the chart), so did bond yields.  Then again, the correlation’s sign flips to positive since 1995, with a reading of 0.64%, meaning yields follow the deficit lower. 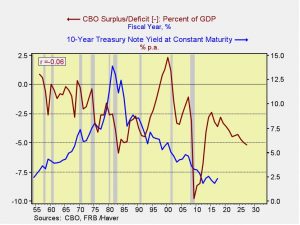 It should be noted that many of the deficit hawks, such as Martin Feldstein, came of age during the 1970s and 1980s when deficits seemed to matter.  They apparently believe this period was the norm but have failed to address the fact that the correlation has reversed.  The key issue is how the deficit is funded.  Until the mid-1980s, the deficit was mostly funded domestically, which meant that higher government borrowing “crowded out” domestic investment and, unless the fiscal spending was on something that was critical to growth, the deficits tended to boost interest rates.  However, after the mid-1980s, massive overseas dollar balances, a product of the larger trade deficit, created a source of foreign funding.  Since this foreign funding was a product of foreign nations using the U.S. consumer for growth and development, the U.S. didn’t really face serious constraints on the size of the deficit.  Thus, the correlation reversed.  Our expectation is that the fiscal deficits will result in a much larger trade deficit and a weaker dollar, which is why we are so concerned with protectionist trade measures.  If they are successful, it will lead us to conditions similar to the 1970s and early 1980s, meaning higher inflation and much higher bond yields.  So far, the president hasn’t acted as aggressively on trade as his campaign rhetoric suggested.  Our recent WGR discussion[3] suggests the real goal of the president’s policy is to attract foreign investment.  If we are correct, the scare talk from the deficit is just that—scary, but with no lasting impact.