Global equity markets continue to grind higher.  We have an update on the Wuhan virus.  Chair Powell goes to Capitol Hill today and tomorrow.  The New Hampshire primary is underway.  News on Brexit.  The conflict in Syria continues.  The Philippines ends a long-standing security arrangement with the U.S., creating a gap in the first island chain.  CO2 emisions are slowing.  Here are the details:

Wuhan virus:  The number of infections is now above 43k and fatalities are over 1k.  China tried to go back to work yesterday but turnout was rather low as quarantines and fears of the virus kept workers away from the factory and office.  It appears the recovery will be slow and we would expect to see supply problems begin to develop soon.  There is evidence to suggest the pace of infections is slowing (but men appear to be worse off from the disease). 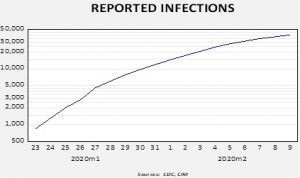 However, as we have warned, this data should be taken with some degree of caution as actual infection rates are probably understated.  In related news, Chairman Xi made a tour, the first time he has been seen in a while.  We note that Xi has added Chen Yixin to the team overseeing the government’s response to the Wuhan virus.  Chen is the secretary general of the party’s law enforcement and is considered a protégé of Xi.  Adding such a high-profile person to the team suggests that (a) Xi is taking the event seriously, and (b) if a crackdown against unrest and social criticism is necessary, Chen would be a good candidate to lead it.  The first tranche of PBOC liquidity was offered yesterday.  Crude oil prices are getting a bounce this morning but problems within OPEC continue to pressure prices.  Finally, an example of the power of rumors has emerged in Hong Kong; there has been a run on toilet paper.  This run has occurred as other items, such as surgical masks and anti-bacterial soaps, have become scarce.  Once a hoarding mindset develops, the behavior can shift from the reasonable to unreasonable.  It reminds us of the famous toilet paper shortage of 1973, thought to be triggered by a joke in Johnny Carson’s monologue.  Why do we mention this event?  Because, under strain, humans can become remarkably irrational and investors should take care that although we think the odds favor the Wuhan virus being a one- to two-quarter event, that doesn’t mean odd things won’t happen.

The Fed to Capitol Hill:  Chair Powell will go to the House today and Senate tomorrow for his semi-annual testimony.  Expect him to be peppered with questions about the Wuhan virus and the state of the repo market.  Powell has been in office long enough now that we don’t expect him to make any market-moving statements; in general, the Fed is likely to hold policy steady for now, with a bias to easing further.

Brexit:  Negotiators for the Johnson government are moving to protect financial services, pushing for “permanent equivalence” for that industry in the EU.  Officials admitted that the “smart border” concept of using technology to create a seamless border won’t be ready until 2025.  In the meantime, actual paperwork will tend to slow trade.  In other U.K. news, yesterday the government approved a massive railroad upgrade project that will improve high-speed transport throughout the country and cost upward of £100 billion through 2040.  The “HS2” project, which will be the biggest infrastructure program in Europe, could be bullish for a range of British stocks in the manufacturing and construction industries.

United States-Philippines:  The government of President Duterte said it has terminated the U.S.-Philippine Visiting Forces Agreement, under which the two countries held joint military operations.  The move will likely cause even more tension between the U.S. and the Philippines, strengthening China’s position in the South China Sea.

Climate change:  The International Energy Agency said global carbon dioxide emissions from the energy sector stopped growing in 2019, largely because of a plunge in coal burning and a shift toward renewables, natural gas and nuclear power for electricity generation in the developed countries.  The U.S. had the biggest drop in emissions (3%) as ultralow natural gas prices continued to prompt a massive shift away from coal generation.  If electricity generation continues to shift toward gas, whether on account of cost or regulation, it could raise hopes for better gas pricing down the road.