[Posted: 9:30 AM EDT] U.S. equity futures are trending higher this morning after a later rally on Friday.  It’s the 40th anniversary of the Iranian Revolution.[1]  Here is what we are watching today:

Trade: Talks between China and the U.S. will restart next week; the focus on this round will be intellectual property.[2]  Although last week’s dip in equities was tied to reports that Chairman Xi and President Trump wouldn’t meet until after the March 1st deadline, that fear has been eased as market participants realize the deadline is artificial and can be extended by the U.S.  Reports suggest China is “upbeat” about the talks,[3] although there was another U.S. freedom of navigation exercise in the South China Sea that did upset the Chinese.  There were reports that the two leaders may meet next month at Mar-a-Lago; the report itself is a good sign of progress.[4]  As we have noted before, the president needs a good economic and market year in 2019 to support his re-election chances.

Chinese economy: Spending during the Chinese New Year was the slowest since 2005 as consumers held back due to rising uncertainty.[5]  Foreign reserves were mostly unchanged in January, with little evidence that the PBOC intervened in the forex markets. 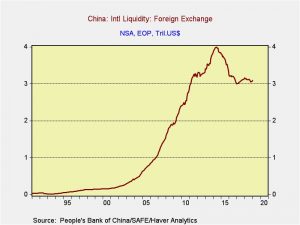 Another shutdown?  Negotiations on the budget have broken down mostly over border security issues.[6]  Although there are fears of another government shutdown, we suspect it will be averted.  The president doesn’t have the votes to get a border wall through the House; we think odds favor a declaration of a national emergency followed by months of legal maneuvering.  This action would allow government funding to go forward.  It should be remembered that the U.S. will be facing the debt limit issue by early summer, so the potential for another shutdown looms later this year. 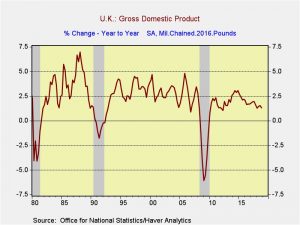 This chart shows yearly GDP growth.  Worries about Brexit are likely behind the slowing.[7]  Meanwhile, PM May is reaching out to Labour MPs,[8] offering concessions on workers’ rights in a bid to build support for her plan.  We suspect there is a working majority for May’s proposal, just not within her coalition.  The best outcome for May would be that Euroskeptic MPs within the Tories, fearful of an even softer Brexit, would then support her plan.  A less favorable outcome would be that she gets enough Labour votes to pass her bill but splits the Conservatives.  The EU showed a bit of easing as the EU chief negotiator Barnier offered to rework the political declarations.  In an FT op-ed, Wolfgang Münchau warns that negotiations are likely to go down to the wire and both sides will probably make concessions.  He reminds readers that this is normal for negotiations within the EU.[9]

Sanchez in trouble?  Spain’s PM is facing a crisis over Catalan, the province that has made moves to separate from Spain.  Sanchez indicated he would appoint a mediator between the central government and separatists.  This has triggered a firestorm[10] that threatens to bring down Sanchez’s minority government.[11]  For background on this issue, we have footnoted two Weekly Geopolitical Reports.[12]

Are right-wing populists taking control of Italy?  We have been watching Italy closely as its government is made up of populists from both wings.  History suggests that such alignments are difficult to manage, although it remains a goal among notable populist thinkers.[13]  In weekend regional elections, right-wing parties of both the populist variety and center-right overwhelmingly won, taking 48% of the vote, with right-wing populist party The League gaining 28% of the vote.[14]  Although one must be cautious about reading too much into one election, the results may be signaling that Italian voters are more inclined toward right-wing populism compared to its leftist variant.

A Thai crisis: In practice, Thailand is governed by three groups—the monarchy, the military and the legislature.  The three maintain an uneasy relationship.  The military regularly intervenes via coups when the legislature takes a direction it opposes.  The monarchy has traditionally remained above the fray, intervening only to reduce tensions between the military and the legislature.  That delicate balance was disrupted when King Bhumibol Adulyadej died in October 2016.  His son, Vajiralongkorn Bodindradebayavarangkun, succeeded him.  Unlike his father, who lived a modest and dignified life, the new king is considered less dignified.  After a coup in 2014 put the military in charge, the generals are trying to shift back toward a democracy, but only if they can prevent populists led by the Pheu Thai Party (PTP) from gaining control.  In fact, the last two leaders of the PTP have been deposed by coup and live in exile.  In a bombshell, Princess Ubolratana Rajakanya, the eldest child of the late king, aligned with the PTP and agreed to run for prime minister.[15]  This was a shocking development.  There is clearly an uneasy relationship between the military and the PTP; for the royal family to directly support the PTP threatens to undermine the balance in Thai politics.  The king has decided to step in to postpone a crisis by forbidding his sister from running for office.[16]  Although the princess gave up her royal status by marrying a commoner (an American, BTW), the daughter of the late king is still considered a royal in practical terms.  The new king clearly wants to avoid a political crisis.  If the PTP wins upcoming elections, tensions will likely rise further.

Another ECB support package?  German bond yields continue to spiral lower, with the 10-year falling to 11 bps this morning.  The German sovereign yield curve has a negative nominal yield out to nine years as the German and Eurozone economy slows.  There are reports that the ECB is considering another round of long-term refinancing operations,[17] a form of QE.  This news is lifting European stocks this morning.

In other news: The U.S. is reportedly in direct contact with members of the Venezuelan military, trying to weaken the brass’s support for Maduro.[18]  There are reports that Russian oligarchs are pressing Putin to end cooperation with OPEC.[19]

[13] A union of right- and left-wing populists is the goal of Ralph Nader.  We refer to such alignments as a Nader Coalition.  Nader, R. (2014). Unstoppable: The Emerging Left-Right Alliance to Dismantle the Corporate State. New York, NY: Nation Books.