Happy Monday!  Global equity markets are flat to down as the world continues to deal with the Wuhan virus.  China officially returns from the New Year’s holiday, but it looks like a slow restart, and China’s inflation rises.  There is political turmoil in Europe.  Here are the details:

Wuhan virus:  Global confirmed infections are 40,649 with 910 fatalities, exceeding SARS.   Reports suggest there is growing anger at Beijing for the handling of the crisis.  Chairman Xi has finally started to make public appearances amid the rising criticism.  Officially, the New Year’s holiday ended today, but reports suggest that business recovery is very slow.  We had the first confirmed fatality of a U.S. citizen over the weekend.  The PBOC has instructed banks to lower rates and facilitate payment extensions; analysts worry this action will weaken the resolve of the banks to deal with bad debt once the crisis passes.

CPI rose 5.4% in January, well above forecast.  Although prices do tend to rise in January, hoarding activity played some role in boosting prices.  Food prices, which rose 20.6%, were a major factor in lifting overall CPI. 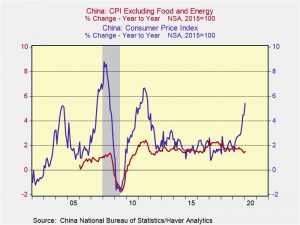 PPI was unchanged; we believe the Wuhan virus has not affected producer prices yet and thus we will be watching to see the impact in coming months.

Global equity markets are mostly looking through the current crisis, focusing on expectations of further policy easing.  It is possible that financial markets have gotten a bit ahead of themselves and thus we may be in for a few weeks of consolidation until we get clear evidence that the virus has been contained.

European politics:  There were two major items of note.  First, Saturday’s election in Ireland generated an inconclusive result.  The two centrist parties, the Fine Gael and Fianna Fail, took 20.9% and 22.2% of the vote, respectively.  The winner was Sinn Fein, at 24.5%.  The centrist parties cannot form a majority government without Sinn Fein, but both have historically avoided letting Sinn Fein into government, in part due to its ties to the IRA.  Sinn Fein did well among younger voters who have no memory of its ties to the IRA; the leftist party conducted an anti-austerity campaign that focused on stagnant wages and high housing costs.  The most likely outcome is another round of elections.  If a minority government is formed, we doubt it will last long.

The second item is that Annegret Kramp-Karrenbauer (AKK) has stepped down from leadership of the CDU/CSU in the wake of the Thuringia situation.  Last week, in this German state, the CDU teamed up with the AfD to install a Free Democrat as state premier (who, in the wake of this event, has resigned).  Teaming up with a far-right party has dark historical connotations and clearly upset the CDU/CSU leadership.  AKK’s resignation throws Chancellor Merkel’s succession open again, raising the possibility that her replacement will force her to resign.  The leading candidates include Friedrich Merz, a former leader of the CDU parliament members, Jens Spahn, the current health minister, and Armin Laschet, current prime minister of the state of North Rhine-Westphalia.  The breakdown also reveals the fracturing of German politics and opens the possibility of much more radical outcomes, which would have serious ramifications for the future of the EU.

Odds and ends:  One reason the Phillips Curve relationship appears to be broken is due to the difficulty in determining labor supply.  The labor force has continued to grow despite data that would suggest the number of available workers should be exhausted.  Why is this happening?   The labor market is drawing a steady supply of workers who were previously out of the labor force directly back into the labor force.  This pattern should encourage the Fed to keep policy rates steady to continue to foster this development.

In early negotiations, it looks like the EU is offering open access to U.K. financial firms in return for continued access to British fishing waters; in other words, finance for fish.  Thirty-year mortgage rates hit an all-time low.  Global trade growth rose by a modest 1%, the fourth worst over 40 years of data.  The U.S./China trade conflict is the most likely culprit.  Although we don’t expect action in an election year, at some point, we do expect the administration to take direct steps to weaken the dollar.  We note that companies are starting to complain about the strong greenback.