[Posted: 9:30 AM EST] Happy Fed Day!  The FOMC completes its first meeting of the year with a new slate of voters.

As a reminder, the Mankiw rule would suggest the Fed needs to raise rates.  The Mankiw rule model attempts to determine the neutral rate for fed funds, which is a rate that is neither accommodative nor stimulative.  Mankiw’s model is a variation of the Taylor Rule.  The latter measures the neutral rate using core CPI and the difference between GDP and potential GDP, which is an estimate of slack in the economy.  Potential GDP cannot be directly observed, only estimated.  To overcome this problem, Mankiw used the unemployment rate as a proxy for economic slack.  We have created four versions of the rule, one that follows the original construction by using the unemployment rate as a measure of slack, a second that uses the employment/population ratio, a third using involuntary part-time workers as a percentage of the total labor force and a fourth using yearly wage growth for non-supervisory workers. 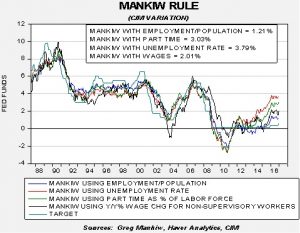 The implied LIBOR rate from the two-year deferred Eurodollar futures is projecting a 1.76% rate into the future. 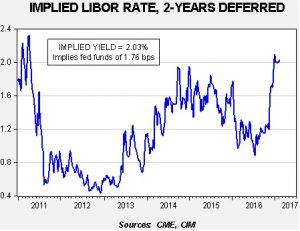 The election of President Trump led the markets to reverse policy expectations and rapidly build in rate hikes.  For most of last year, this indicator was suggesting that slow economic growth and continued low inflation would lead the Fed to raise rates very slowly; in fact, last July, this indicator was signaling a fed funds of 60 bps two years from now.  The interest rate markets expect the new president to boost economic growth and inflation, leading the U.S. central bank to raise rates significantly compared to last summer.

Despite the Fed’s statutory independence, it is under the sway of political influence.  The administration, as we have recently noted, has been arguing that the dollar is too strong.  One of the key components of dollar strength is the divergence in monetary policy between the U.S. and the other major nations’ central banks.  If Trump can badger Yellen into not raising rates as rapidly or as far as the market expects, the dollar will likely weaken.  The risk is that financial markets will begin to build in inflation expectations, which will bring higher rates on long duration assets (which are more sensitive to inflation and less to monetary policy) and could lead to P/E contraction in equities.

What will Yellen do?  Will she cave into what we see as growing pressure on the Fed to be dovish?  Or will she press the Fed’s independence and move rates higher as the interest rate markets suggest she will?  Her history suggests she leans dovish; however, she has publically indicated she opposes fiscal expansion at this stage of the business cycle.  It is too early to tell, but one of the stories shaping up for 2017 may be Trump versus Yellen.  We might get our first clue today.  Although fed funds futures only expect about a 15% chance of a rate hike, we will be closely watching to see what the statement looks like because a hawkish tone could be an indicator that the FOMC is prepared to deal with opposition from the White House on monetary policy.  At present, fed funds futures are not expecting a hike this year until May; the odds for March are near 35%.  The Fed could tee up a hike for March with a hawkish statement.

We are watching a couple of geopolitical items.  First, there has been a notable increase in fighting in eastern Ukraine.  We suspect that Putin is testing the West to see if it will react to further encroachment.  We don’t expect the Trump administration to push back against Russia; any resistance will need to come from Europe.  Although western European nations probably won’t do much, we do note that Poland has a mutual defense pact with Ukraine and if Poland were to send material support and then get attacked by Russia, it could trigger an Article 5 “collective defense” declaration.  Second, the Greek economic and financial crisis is brewing yet again.  Greece and its creditors are in negotiations over bailout support.  Athens has balked at creditor conditions for the next round of disbursements and the creditor nations, many facing elections this year, are loath to give into Greek demands for relief.  PM Tsipras is trying to hold onto a fractious coalition that only holds a five-seat majority.  If the government fails, it would mean another European election this year and add to political uncertainty in the EU.