Our Comment today opens with an extensive update on the Russia-Ukraine crisis.  Among many significant developments over the weekend, the Russian offensive seems to have stalled, prompting talks between Russian and Ukrainian officials this morning.  All the same, the U.S. and its allies have imposed sweeping sanctions against Russia, contributing to disruptions in many financial markets so far today.  Given our expansive treatment of the Russia-Ukraine crisis, we provide only a limited overview of some other important U.S. and international developments.  We wrap up with the latest on the coronavirus pandemic.

Russia-Ukraine:  Some developments over the weekend were positive, and some were negative, but on balance, we judge that security, economic, and financial-market risks have increased.  Among the positive developments, multiple reports suggest the Russian offensive has stalled out because of stronger-than-anticipated resistance from the Ukrainians and the Russian military’s own logistical, tactical, and morale shortcomings (for a map of Russia’s surprisingly limited military gains so far, see below).  Additional strong sanctions by Western governments and corporations announced over the weekend may help explain why both sides have agreed to negotiations on Monday at the Belarusian-Ukrainian border.  On the negative side, however, it appears Russian President Putin has become so frustrated with Russia’s slow progress that he is increasingly apt to adopt stronger, more dangerous measures.  On Sunday, he announced he was putting Russia’s nuclear forces on heightened alert, and many observers believe he will try to reinvigorate the Russian invasion by unleashing much more destructive attacks against civilian targets.  It also appears he is making sure that Belarusian President Lukashenka helps with his dirty work.  Over the weekend, Lukashenka pushed through constitutional changes that would increase his power and rid Belarus of its non-nuclear status, which would allow Russia to base nuclear missiles there.  Reports indicate Belarus will also send troops into Ukraine to support the Russian forces there.  In any case, the tensions continue to push energy prices sharply higher today and are weighing on most major equity markets.  The tensions also threaten new supply shortages that could push prices up for a range of globally traded commodities. 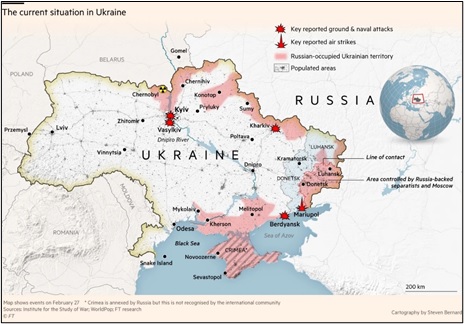 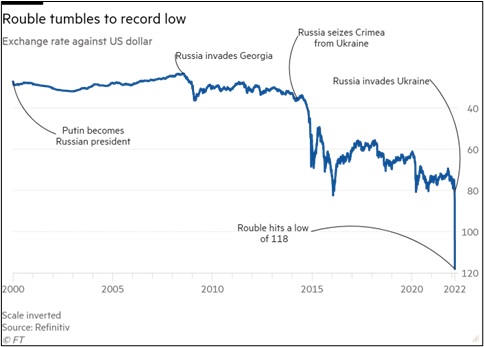 U.S. Economy:  New research from the Atlanta FRB shows the country’s youngest workers are securing the fastest wage increases of any age group.  Median hourly wages for workers aged 16 to 24 were 10.6% higher in January than a year earlier, far exceeding the 4% overall gain for all workers.  The gains largely reflect the post-pandemic economic recovery, especially at restaurants and other venues that employ a lot of younger people.

Australia:  Huge rainstorms over the weekend have submerged cities and towns in Queensland and New South Wales, triggering thousands of insurance claims and stoking criticism of Prime Minister Morrison’s stance on climate change.

China:  New research by consultancy AidData highlights the extent to which President Xi’s “Belt and Road Initiative” of big infrastructure loans to generally poor countries leaves them saddled with debt and under the influence of China.  The new research shows that BRI contracts have not only required collateral in the form of escrow accounts funded by the projects themselves, but also accounts funded by the overall revenues of a borrowing entity.

North Korea:  According to Japanese and South Korean intelligence officials, North Korea launched a suspected ballistic missile off its east coast on Sunday morning, restarting weapons tests after nearly a month of inaction and highlighting that destabilizing military activity remains a threat in the Asia-Pacific region.